The latest Zwift Classic was called the “Richmond Challenge” for a reason. The women took on two rounds of three punchy hills that left few racers standing.

In the Richmond Challenge, riders raced on a replica of the 2015 UCI Road World Championships course in Richmond, Virginia. They rode two laps of the puncheur’s course, each one starting flat and fast and ending in a series of 3 short, rapid-fire climbs.

First comes Libby Hill, which is 630 meters with an average 6.2% grade. Just a moment to catch a breath, and then — another climb of just 260 meters but an average grade of 10.2%. This is usually a full sprint for top racers. There’s a short break before Governor’s Street, where a 1-kilometer climb at an average of 5% leads right into a false flat finish.

This Zwift Classic gave racers the chance to compete for both a sprint classification and a Queen of the Mountains (QOM) title, in addition to going for the win. For these classifications, riders collected points based on their position crossing banners at sprint segments and on the top of the Libby and 23rd Street hills. Each lap of the course features two banners of each type.

Debs Stockley (Race3R) grabbed the most points on the first sprint, while Ione Johnson (Velocity Vixen/Fox) crossed the next banner first. In spite of these surges, the bunch stayed together until the first time up Libby Hill. About 40 women took part in the race Wednesday, including four from professional cycling team Sho-Air Twenty20. 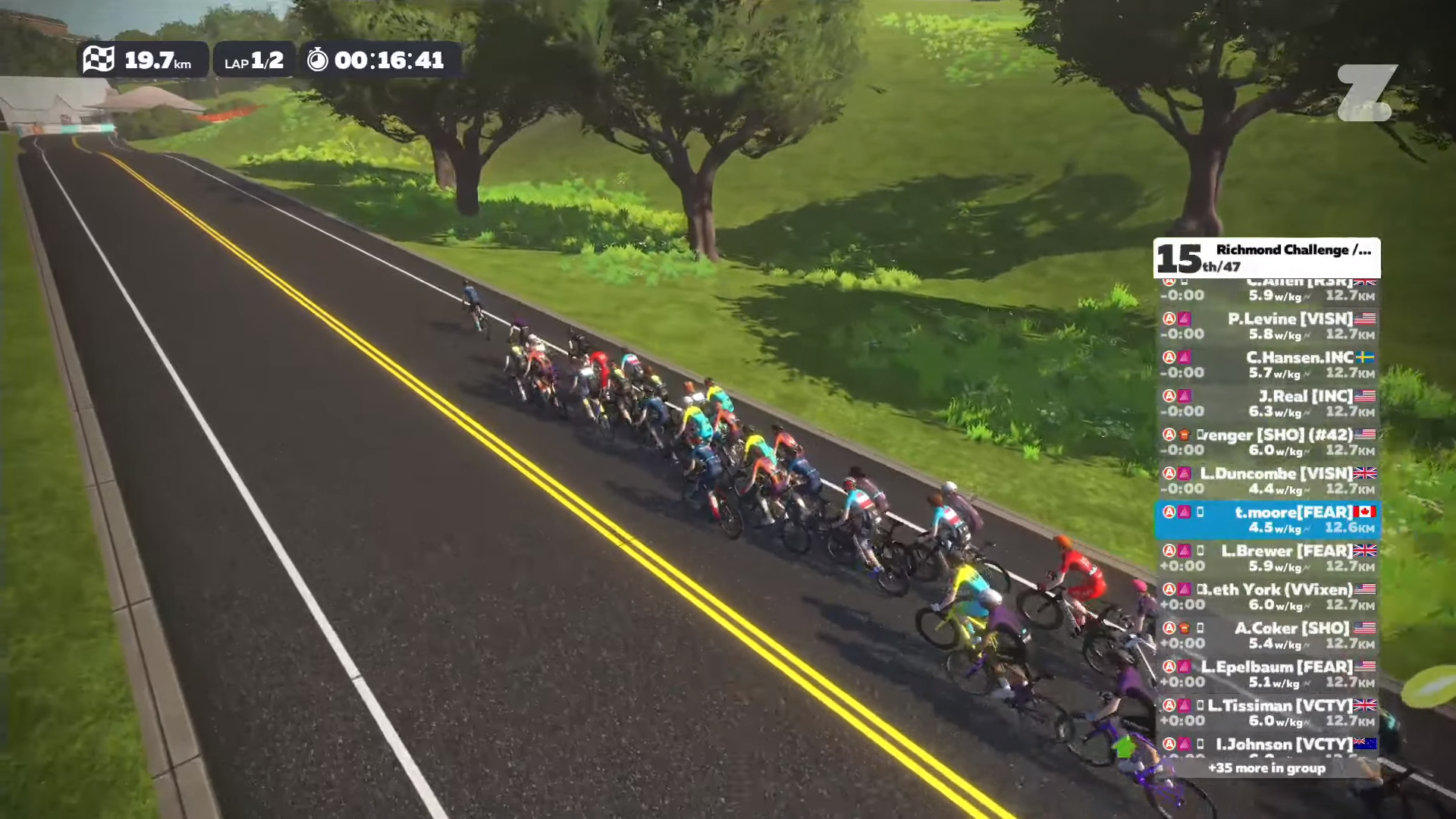 Shayna Powless (Sho-Air Twenty20) led the way into the base of the climb. Then, as the racers charged up the cobbles, the pace ramped up and the peloton began to break apart. Near the top, Johnson used a lightweight feather PowerUp to ride off the front and put some distance between her and the other riders.

Several other riders were hot on her heels, and they rejoined her in time for the short descent into the 23rd Street climb. Johnson used another feather PowerUp to move to the front over the top, again crossing the QOM banner first. 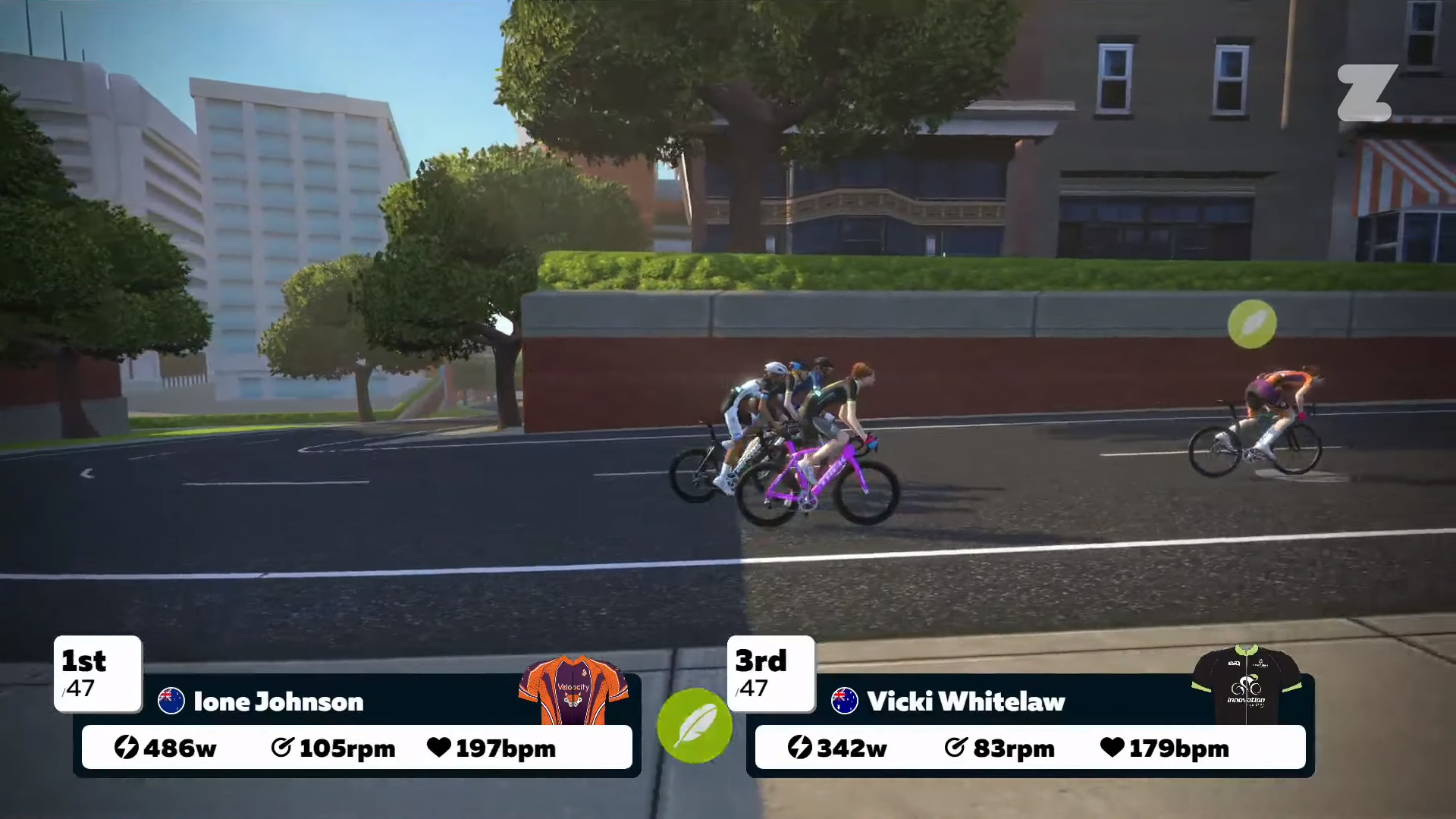 After these two hills, only nine riders remained in the front group. They had just a couple minutes to try to recover before the next climb up to the finish line. A chase group several seconds behind threatened to catch up if they slowed down. Jennifer Real (Fearless) and then Lizi Duncombe (Vision) lost contact on the Governor’s Street climb. Duncombe stayed within sight of the leaders, and when the road flattened out, she managed to claw her way back with a strong solo effort.

As they started the second lap, the eight leaders were about 30 seconds ahead of the closest chase group of five riders. That time gap stayed constant for a few miles, as the chasers and the leaders kept the same pace. 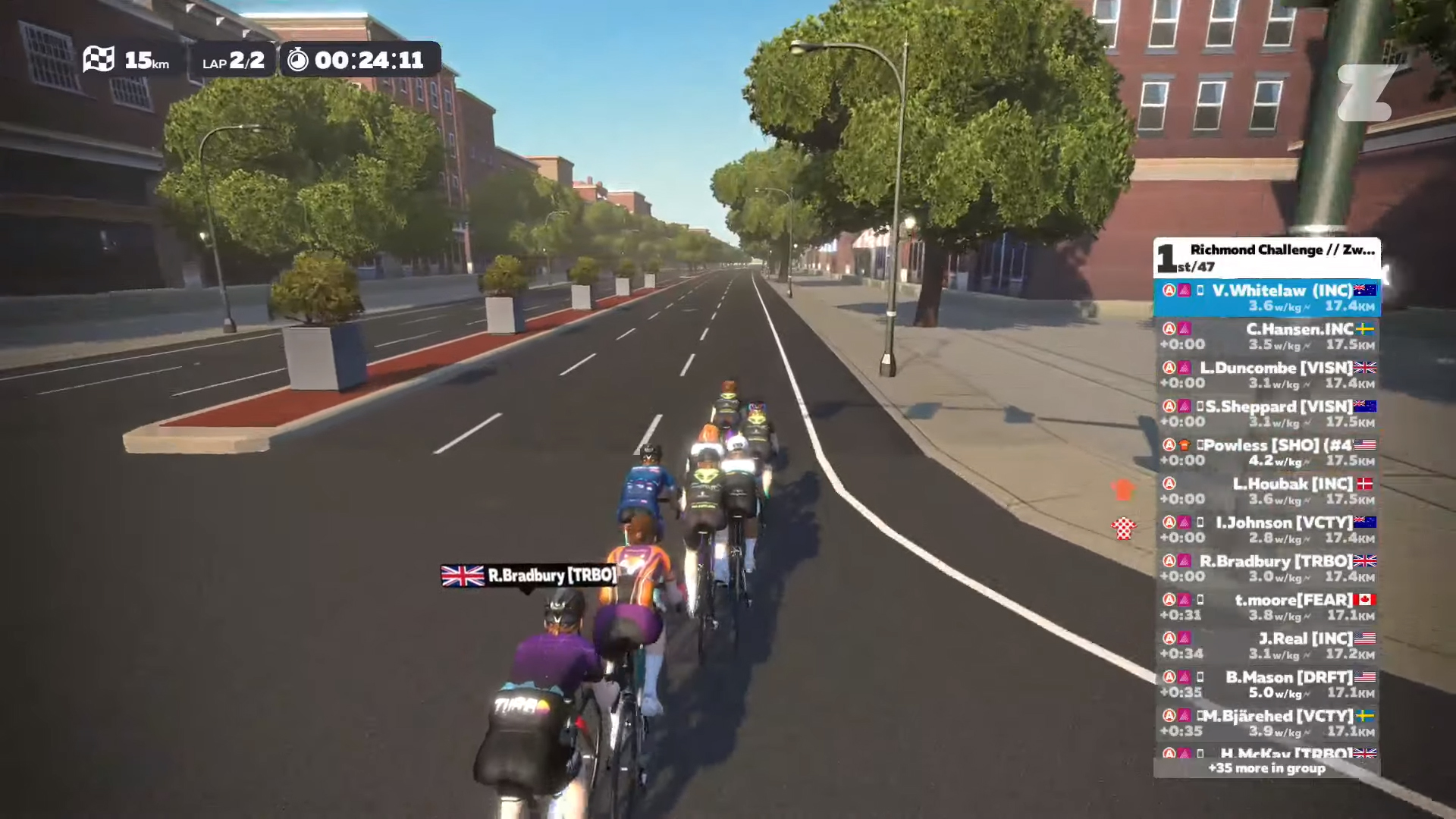 But the leaders had the remaining sprints to themselves, and they fought hard for those points. Johnson won one sprint and Cecilia Hansen (Innovation Cycling) took the next. Those turns of speed brought the gap to the chasers to nearly a minute, even though the group behind had gained more riders.

Sheppard set a tough pace at the bottom of Libby Hill's winding cobblestone road, and it only got harder from there. All but Houbak and Bradbury made it to the top together, with Hansen crossing the banner first. The six remaining riders also came over the 23rd Street climb together, led by Johnson.

Governor’s Street was the only big obstacle left between the day’s strongest racers and the finish line. Sheppard used this climb to attack with an undraftable “breakaway burrito” PowerUp, making sure nobody got even the smallest benefit from riding behind her. Innovation’s Whitelaw chased it down, sending Johnson off the back for the first time in the race.

Johnson looked like she was in trouble. She put in a big dig to close the few bike lengths that had opened up ahead to Whitelaw. Then she dropped a feather PowerUp and charged right past them! She quickly got a gap and held onto it, staying ahead on the stretch of false flat and over the finish line. With her win, the Velocity Vixen/Fox rider provisionally topped the podium in all three of the day’s competitions. 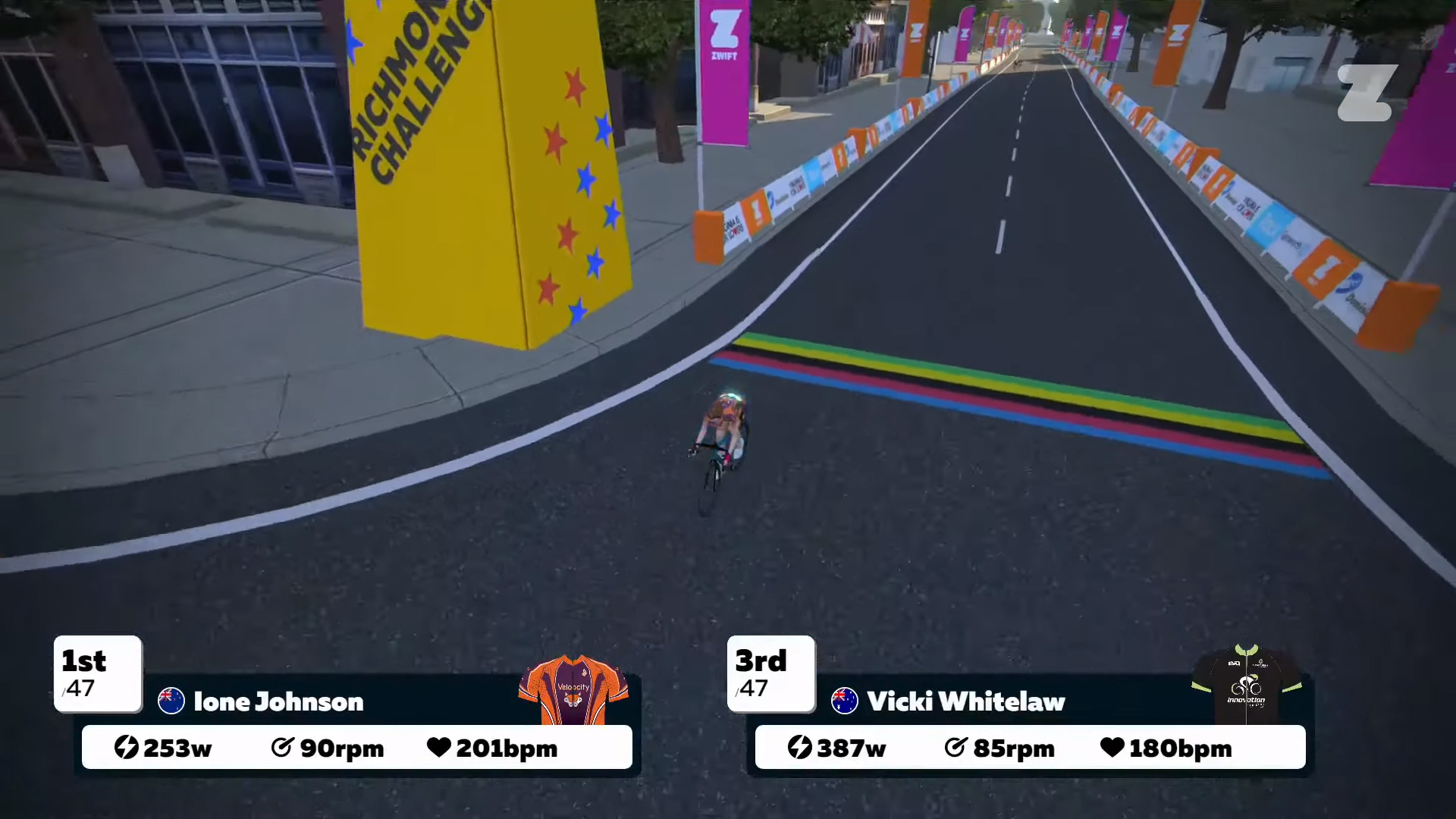 Johnson said she went into the race only targeting the sprint competition. She went all out to stay at the front on the hills, afraid she would get dropped.

“I wasn't expecting to come away with the win at all. I was feeling pretty good but pushed very hard and surprised myself,” she said. “I went a bit too hard on the first lap and almost got dropped coming into the finish straight but managed to hang in!”

“For me, it was one of the toughest courses I’ve raced on Zwift but also one that suited me well since I love punchy climbs,” she said. “I figured the field would shatter with the two QOMs towards the end of the lap which I knew would ultimately lead to a smaller field sprint at the end. In the end, my prediction was accurate… though Ione (Johnson)’s PowerUp attack from behind caught me off guard.”

Even Johnson didn’t expect her attack. It turns out that her boyfriend, Ryan, was by her side, cheering her on when she made her sprint to get back to the group.

“He just started yelling at me to keep going and activated my PowerUp, so I had no choice really and just put my head down,” said Johnson. “I thought I was going to get rolled as I went very early but it worked out well!”