Watopia's Sand and Sequoias route is a favorite among Zwifters because it blends two very distinct landscapes into one challenging race course. We begin in Fuego Flats: a hot, fast, desert landscape complete with a ghost town, elusive roadrunner, and oasis. Then it's a quick, uphill transition into Titans Grove, a nature preserve set in the giant redwoods. This portion of the route is twisty and rolling, with no flat or straight roads in sight. Hold on for the roller coaster ride and attack if you can. Soon enough you'll be heading back into the desert for the final flat kick to the finish!

What follows is a detailed look at key sections of this route with racing tips from a Zwifter who has seen more Zwift racing than anyone else in the world: Nathan Guerra! Nathan is a strong A-category rider himself, but he has also provided live commentary for Zwift races since our early days, analyzing race tactics and course strategy on the fly for hundreds of events.

Read his tips and we think you'll agree that Nathan's experience as a racer, coach, and commentator allows him to provide an unparalleled level of insight into Zwift race strategy. We hope you enjoy this very special race recon! 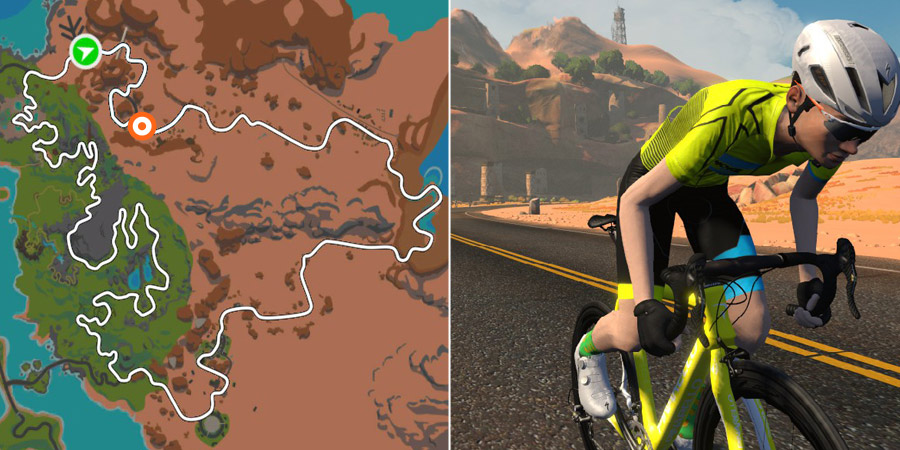 Your race will start hard and fast, so make sure you're adequately warmed up before the clock hits zero. "With an extra-motivated group of racers, the speeds at the start can quickly turn into an insurmountable distance for even the strongest of riders," Nathan explains. "This is the nature of many Zwift starts, but it is an extra dangerous reality on this specific start. You could find yourself with a completely empty tank in the first 3 minutes, helpless to a quickly disappearing peloton."

Nathan offers tips for a successful start to your race:

The keys to this start: stay near the front of the pack at all costs and immediately close any gaps someone allows! With a long time before the first gradient rise, make sure to be on guard till the pack settles into a rhythm.

Got the strength to go on the offensive? This is a great time to do it. Nathan says, "If you find a few favorites caught out early on, only a little effort on the front goes a long way. Setting a steady threshold on the front will be sure to pay off dividends later in the race, burning matches of caught out competitors or even ending their race before it began."

#2: Rise Out of Saddle Springs 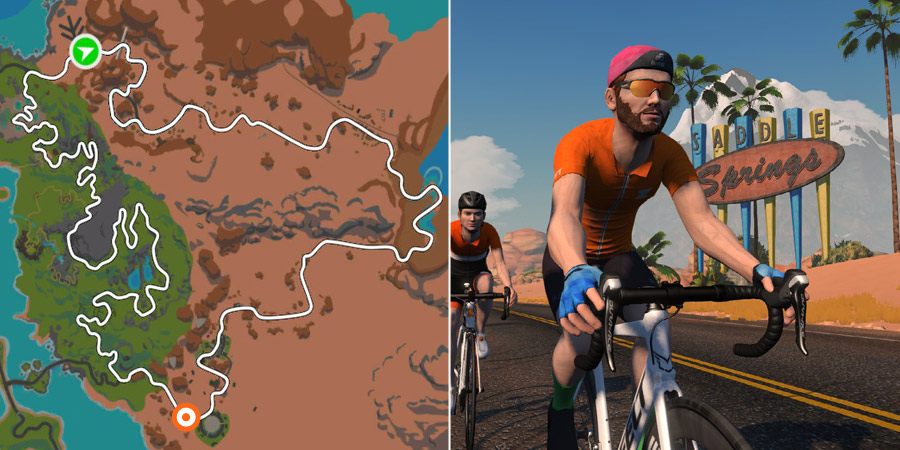 After you ride through the town of Saddle Springs, the road tilts up and the watts ramp up. Heads up! You're entering the transition area between Fuego Flats and Titans Grove.

The first climb is just a setup for the real opportunities coming up to break away and put a dent in your opponents' fuel reserves," Nathan explains. "There are decisions to be made here about tactics. If you have confidence in your fitness over a threshold effort, you can apply pressure and put your competition on the back foot, but be aware the competition will most likely get some free speed from your attacks, as this short rise quickly ends, leading into rolling hills that usually assist a well-versed wheel sucker before the KOM.

Most attacks leaving Saddle Springs are brought back, and it is only keen, experienced groups of riders or teams that can really organize a break with any chance of success here. Solo ventures usually suffer, finding the lone rider off the back or just hanging on once the race hits the real climb. Best to either reserve for the true KOM or have a few pals organized through Companion or Discord to put pressure on if you believe you have the joint fitness to put the hurt on! 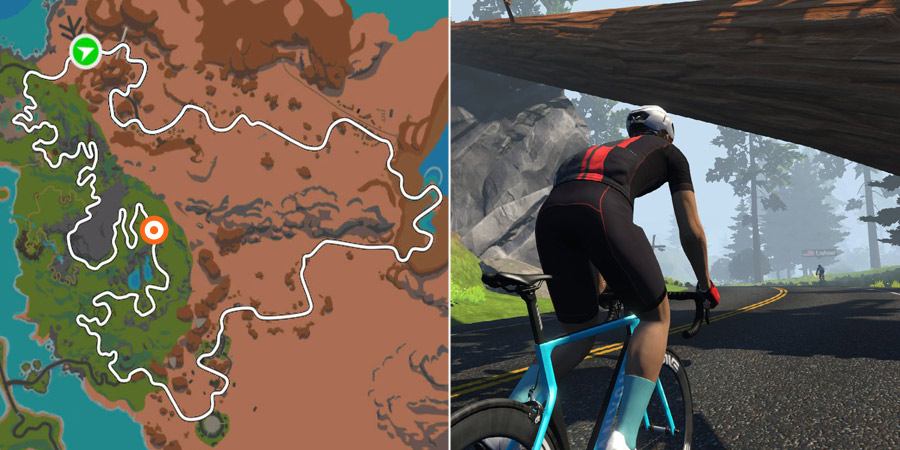 Because of the way it lays out, the Titans Grove forward KOM is a challenging segment to get right if you're looking to go on the offensive. Nathan explains:

The forward KOM can be very deceptive. Just as you think you are getting into the climb proper it will switch back and level out or even go downhill over and over. This pattern continues all the way to the top, fluctuating between -2% to 4% gradients without any sharp changes but just steady slopes on winding switchbacks. These changes can leave you feeling a bit robbed of your efforts if timed poorly and the group sits on or even surges forward on the first few little flats and downhills in the KOM.

So what's the smartest way to attack the KOM? Nathan says, "This climb is best suited to a late attack rather than early, as drafting is still a big factor early on. The other option for the most reward would be surging each of the 5-6 gradient increases to see who fails to grab back on when the pace settles to what is manageable." 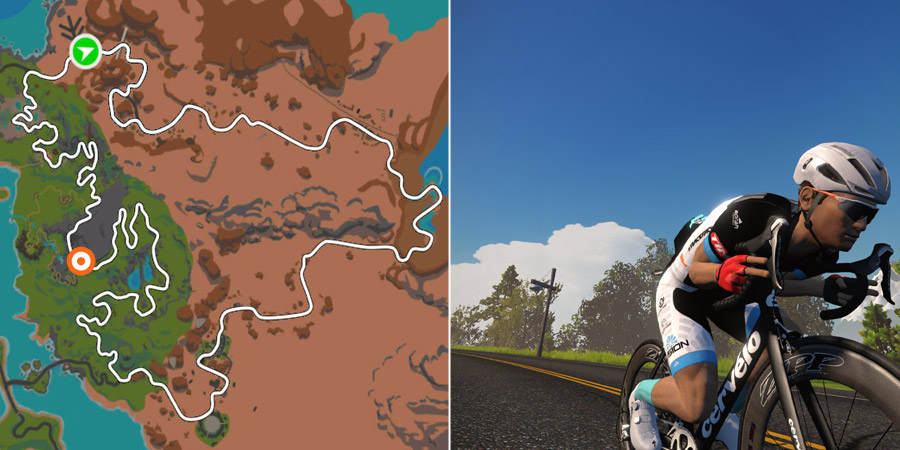 Your body will be tired after the climb, but you've got to keep pushing over the top into the descent. Nathan says, "With the sharp descent afterward, make sure to drive the pace with any other riders over the top and do not lose the wheels... as this descent is not straight forward at all!" 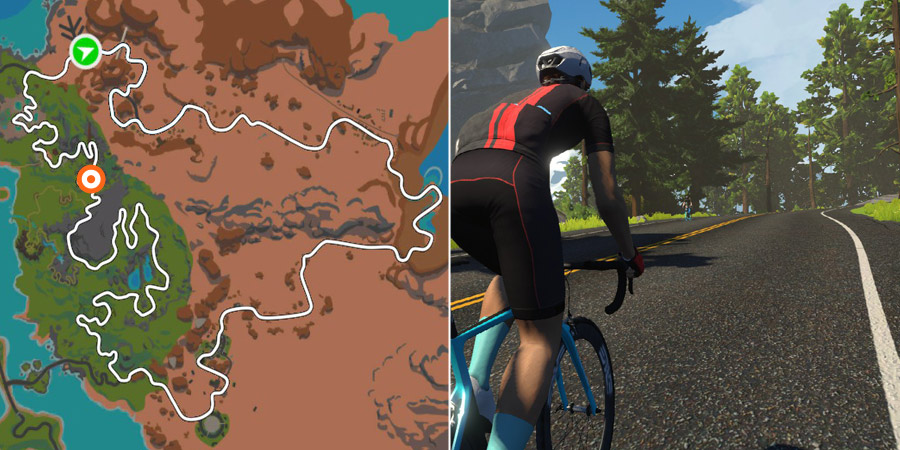 "In my opinion," says Nathan, "this is the most crucial section of the course, as it offers up the most to gain or lose in time because of the speed differences that can be achieved if ridden correctly while competitors are at their limit after the KOM."

You've finished the biggest climb on this route, but the race is far from over. Momentum is king now, as Nathan explains:

A well-oiled breakaway group can gain minutes here over a demoralized chase after the hard-fought KOM. Remember: it is not necessarily raw power, but well-timed pressure on the pedals to carry good speed through each rolling section.

The gradients leaving Titans Grove are steeper than anything on the KOM, but very short and punchy. In particular, the second little climb is long enough to mount a serious attack if carrying speed and may present a better breakaway situation than the steady uphill ascent of the KOM. Even though watts are what we all focus on in Zwift, speed is still king in deciding a race, so make sure you are using your extra watts to hit each punchy climb with as much rolling speed as possible. Using this tactic well will create a roller-coaster effect, helping you soar away from any chasers or perhaps close the gap on a break needing to be shut down. 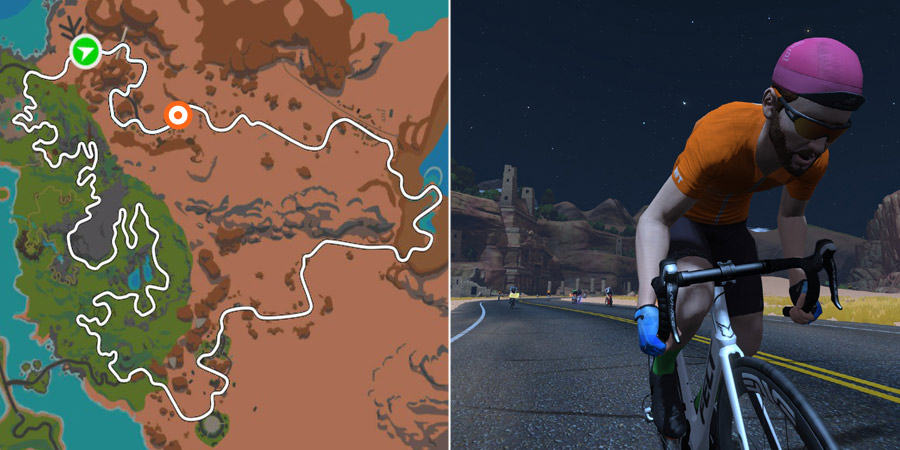 Many riders go early on this tricky finish since the rock arch finish line is visible ahead and the final 500 meters are a timed sprint. But as Nathan says, "Almost every race on this course is won with a kick in those last 150 meters or so from the bend into the rock arch, with early drivers just lending a draft to the real winners while they fade to the line."

Read the group's intentions is smart here, as it can inform your race strategy. Once again, Nathan pulls from his experience to explain:

Are they ramping up, or not willing to work? If it's slow and games, it will almost always be one of the first three to jump who win the race. Because of these common cat and mouse games, I have seen a rider slip away off the front with a solid all-in effort from a mile out and never come back. So always hold the wheels, and close gaps if you sense no one wants to work.

But more often this is a drag race sprint starting from more than a kilometer out. From here the pace will go over threshold and never come down. Hold the wheel but try to reserve a kick. Always try to find 3rd to 6th-7th wheel in this situation and do not go all-in from the sprint marker, it's a long way out! Assuming you got the watts to hold the wheels till just before the final bend, do so, and kick with all you've got at that last bend in the road till the rock arch which stands in for a finish banner.

Of course, a well-used powerup can help a lot in the final sprint. Use the van to more easily sit in the wheels, the aero helmet to give you an advantage off the front, or even the burrito or ghost to help you escape if the group is playing cat and mouse!