Keith Jardine knew he had to make a change. He hadn’t noticed that he was gaining weight slowly, a little more every year, until the scale showed 152 kilograms (335 pounds).

Seven years later, Jardine has lost more than 60 kilograms (132 pounds) with the help of a healthier diet, cycling, and Zwift. In exchange, he’s built friendships and found a new passion.

By the time Jardine turned 40, he was working too much and moving too little. He didn’t exercise at all. In December 2012, Jardine went to buy jeans and realized he needed a 44-inch waist. He looked up at the changing room mirror and saw that his XXXL shirt had gotten too tight.

“I went to the doctor and was told I was obese and had high blood pressure,” Jardine says. “He suggested that if I didn’t do something drastic, I was heading for beta blockers and a premature death.”

Jardine cut out all junk food – no more fast food meals. Instead, he cooked everything from scratch. It doesn’t cost him more money, he says, but it does take more planning and effort.

He also had to get moving. His first choice was swimming, and at the pool, he met others who also were trying to lose weight. They told him that he could burn 800 calories in an indoor cycling class. Now that was something he had to try!

One of the participants suggested he try riding a bike outdoors. He was used to riding a stationary bike, and he already had his own cycling shoes with cleats. How different could it be? He ordered his first bike and some clipless pedals in May 2014.

“When I went out on my first ride, I had never clipped in on a bike that wasn’t bolted to the floor… and ended up in a wall!” he recalls. “I stuck with it, though, and after a couple of months I was cycling 25 km on a quiet road.”

After riding by himself for a while, Jardine tried out a local group ride. With their help, over the next year his longest rides gradually increased to 40, then 60, then 80, and finally 100 kilometers. In 2015 he joined the Peebles Cycling Club and took part in his first race – a time trial.

“I’m not the fastest, but what I love about TT is it’s a race against myself,” he says.

These races gave him new motivation. He kept training and kept bringing down his times, winning the “most improved” award twice. The weight dropped off over the years, just like he had steadily put it on.

In winter, the days got too short to keep riding in the evenings, and going to class wasn’t as convenient as riding his own bike. So Jardine decided to buy an indoor smart trainer. At first, he was going to use a training platform that was focused more on numbers than visuals.

“However, I used to be a gamer on Xbox One and loved racing games,” he says. “So when I first saw Zwift, I think it was on Facebook or YouTube, I thought, ‘This is what I want.’”

He joined Zwift in November 2016 and found not only a game but also encouraging company from other riders, like he’d found in his club.

“I have always had times where the darkness would set in, especially out on the open road,” he says. “I would start thinking: ‘I’m not a cyclist, I’m a fat bloke on a bike,’ but then I would have to cycle home! However, I have never felt that on Zwift.”

To Jardine, Zwift is an equalizer – a place where anyone can be a cyclist. Even if you’re not fast, you still belong.

“I used to race in D and would get dropped off the back,” he says. “I asked in the Zwift Riders (Facebook) group, how to get better, and I got a list of workout plans to do. I started to improve, I would finish mid-field, then I started finishing top 3!”

By the end of 2019, Jardine was 90 kg (about 198 pounds). He says, “I have normal blood pressure, I have lost over 9 stone, I look slimmer, I have a shed full of bikes and have made some amazing friends.” 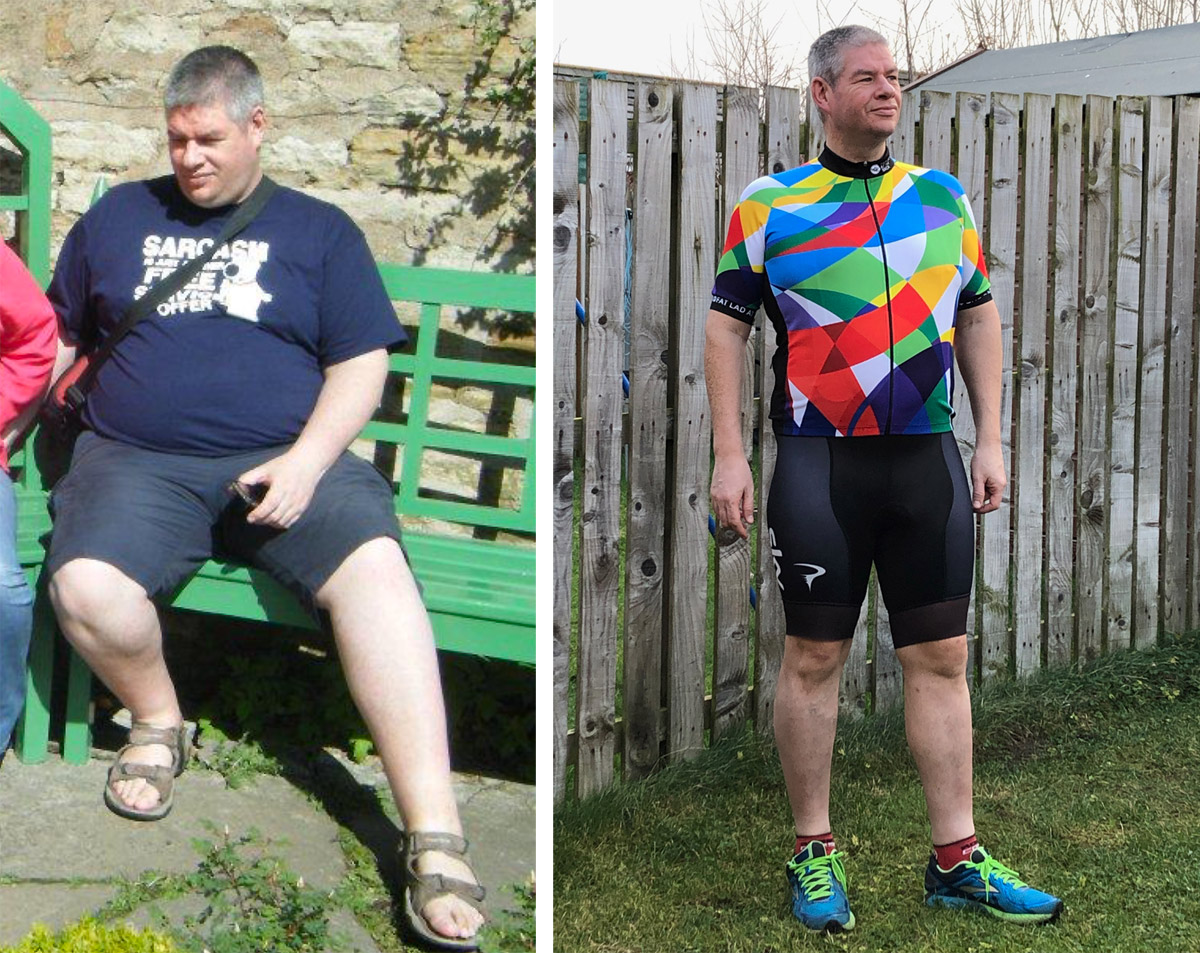 Keith, before and after his weight loss

All his training has paid off on the bike, too, and he won his first club time trial in 2018!

He credits the Zwift community for helping him to stay motivated and giving him support. For anyone struggling to stick to their own goals, he suggests joining group workouts and group rides. Especially social rides with sweepers who won’t leave people behind.

It may take time, so don’t be afraid that you don’t belong because you’re not instantly fast, or fit, or slim. You might just need to find the right people.

“I have made so many friends on Zwift, and have ridden with a few in the real world,” he says. “It’s so much more than an exercise platform: it’s a community, it’s somewhere to have fun, where everyone is the same!”

Or where anyone can change. 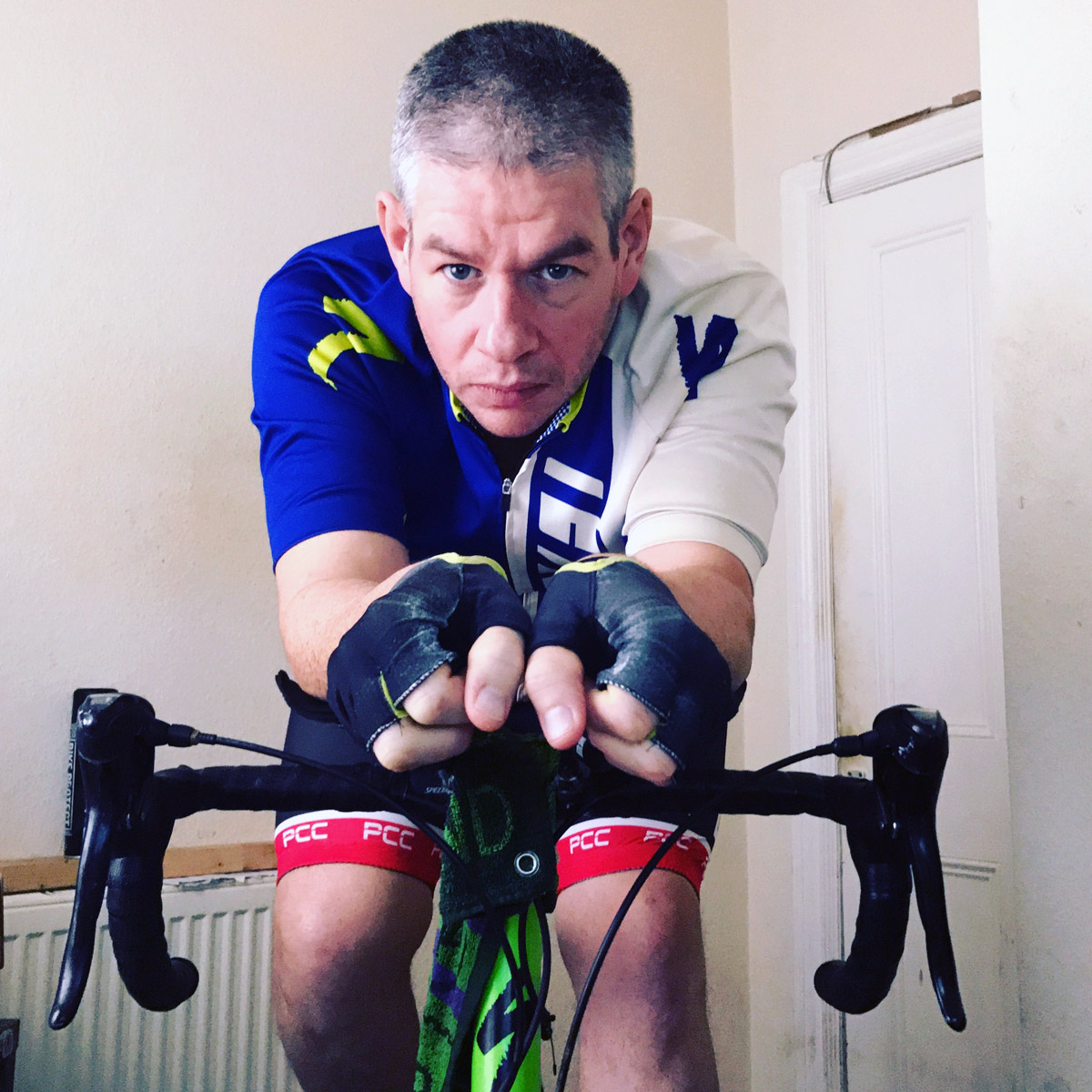 INTRODUCING THE 2020 VOXTOUR over 2 years ago