Want to up your racing game? Confused about the different types of races and how to ride them? We’re breaking down the most common Zwift race types to help you out.

A time trial is a race between you and the clock. It’s the “Race of Truth.” No drafting, no teammates, no tactical games – just you and your bike, trying to cover a certain distance in the fastest time you can.

They work a little differently than other races on Zwift. When you sign up for a TT event, you’ll get an individual start time (equal to or after the event’s start time). Make sure to log in and join the event before that time, and your avatar will line up on one of the conveyor belts in the starting pen. These belts will move riders up and release them in staggered starts. Start pedaling before the countdown hits zero. When it’s time for your row to leave the pen, your avatar will speed up to 20 miles per hour for a rolling start. Cross the line and it’s go time! 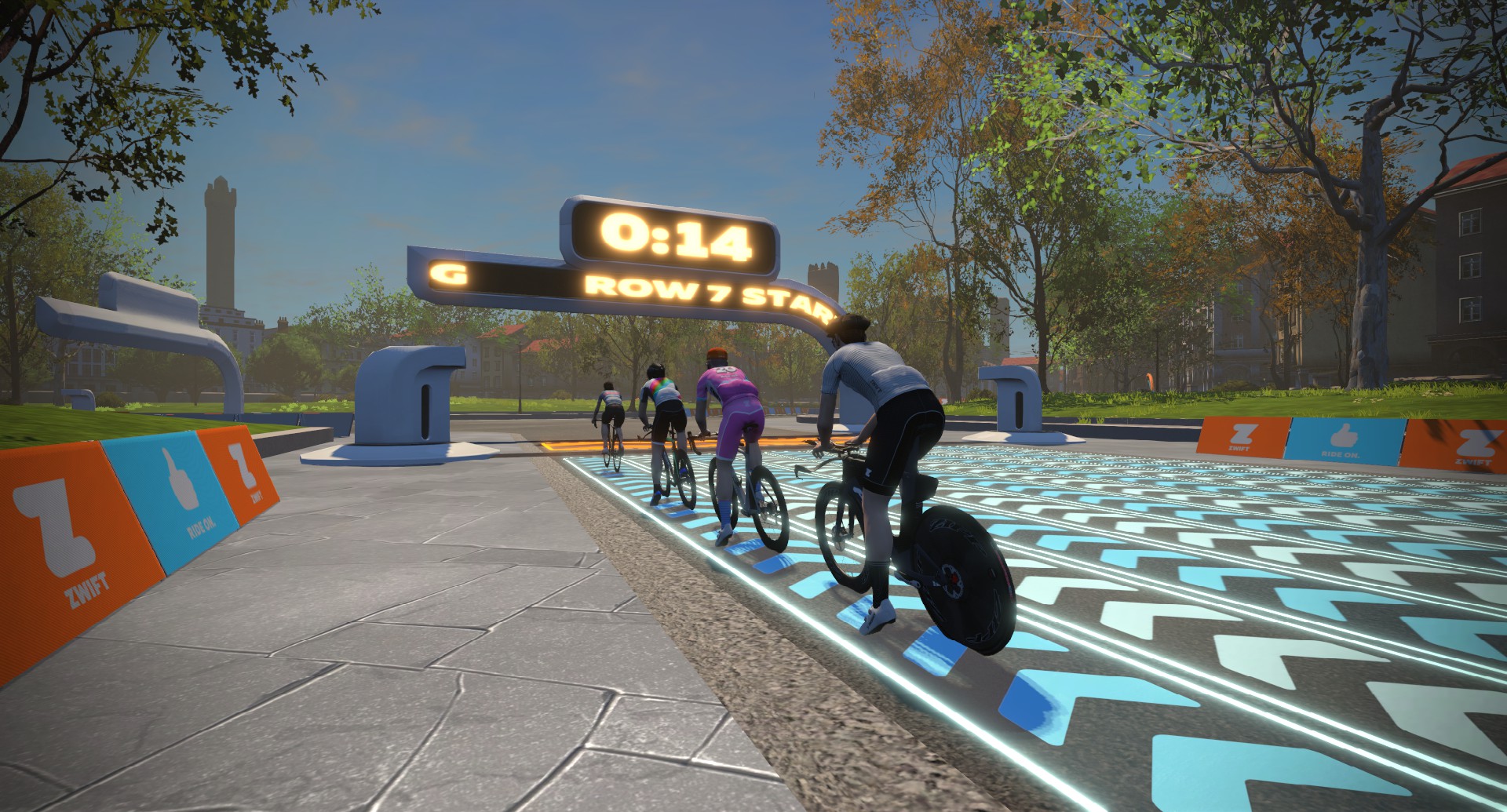 What Makes a Good Time Trialist?

TTs can be very different depending on the length and the course. They might take you 5 minutes or 2 hours to ride. They could be pan-flat or take you up a big mountain.

In general, most time trials on Zwift are between 10 and 30 miles long and take place on flatter courses. These tend to favor riders who:

Don’t be discouraged if that’s not you! A race against the clock is also about getting the best out of yourself. Let’s look at some tips for how to get your best time in a TT.

Any route can be turned into a time trial! Three of the most popular choices for short TTs on Zwift are:

Zwift racer Chris Bartley, a 2018 silver medalist in the British 25-mile Time Trial Championships, says knowing how to ride a course well can be a game-changer.

“Sometimes you can be weaker but still win as you've ridden the course better. Just how to use your power takes a bit of experience, and constantly questioning how you feel - is this too hard? Can I keep pushing this? How much should I ease off? My advice would be always check the course profile and try and plan your effort first. It's easy to get things wrong, and only practise really teaches you what works the best for you.”

How to Race a TT

First, make sure you know the distance and the route ahead of time. Try to figure out how much time it will take you to finish, and then work out the best power you can hold for that amount of time.

Next, decide on your pacing. This is key in time trials!

Chris says: “For a flat, even-profiled TT I'd start perhaps at 5% under the average power I'd expect to be able to hold, and try and build throughout to hit my estimated average by the end. Generally speaking, if I've made it to the final third of the effort feeling reasonably okay, I'd expect to build well. I try not to overcook things in the first two thirds as a rule, whatever the duration!”

An even pace works well when you can hold a constant speed. It’s not the best strategy for every course, though.

Chris says: “Hills and slow sections make it more tricky though, as I'd want to push on during these sections (you tend to make up time this way, rather than completely flat-pacing things). Starting steadier with something in reserve will give more flexibility to push on if needed. I'd usually expect to push on perhaps 10% more than my expected average on slower sections, and then also back off maybe 10% on faster sections. A good rule of thumb for me is if I see speeds below my expected average speed, I'll push on, anything faster and I'll ease off.”

Finally, choose the right gear for the job. It should be no surprise that a TT bike is usually the fastest choice for a time trial! It’s aerodynamic and will let you ride the quickest on flat or rolling routes. On courses with significant climbs, if the event allows it, you could try a lighter road bike – or even come to a stop and switch in the middle.

You might be able to chase other riders on course, but remember – you can’t draft them, and they might be slower riders who started before you. Stick to your pace strategy, and use other racers as motivation to keep the power up when things get hard.

Chris has his own mental tricks he uses during a TT:

“When the efforts really start to hurt, I'll usually count down clusters of seconds - for example I break 5 minutes up into 30 10-second blocks, and count down from 30 to zero. I might do this 3 times in a row which takes care of 15 minutes. I do a lot of counting! Breaking things up like this is always a good way to get through hard efforts.”

After following this guide, you should know your course, have a pacing plan, and have a strategy to keep your mental focus. You’re ready for a Zwift time trial!

Race Recon: Watopia The Magnificent 8 over 2 years ago