If you're looking for a social-paced steady ride with a good-natured bunch varying from beginners to legends in the sport, hop into the weekly Road to Tokyo. Each week's offering is delivered complete with Dad jokes, food stories, and upbeat rider leadership from triple world record holder Amanda Coker!

The goals of the ride are "To interact and spend time with our teammates, fans, and supporters from around the world... and mainly to have a lot of fun!" according to Nicola Cranmer, TWENTY24's director and owner.

"Our group ride is focused on having fun and being social with the wonderful riders of the Zwift Community," explains Nicola. Consistently led by pro women's Team TWENTY24, the Road to Tokyo begins with a slow rollout to group up, then reliably chugs along at a 2.0 w/kg average on Watopia's fairly flat Tick Tock loop.

Why Tick Tock? Nicola says, "This route is great for our group ride because the small amount of elevation allows for a more consistent pace within the group. We are, however, considering moving worlds for 2021 but still a low elevation course."

Occasionally groups split off the front, and that’s ok - participants don't worry about "flyers" but instead focus on holding a steady pace and keeping the discussion upbeat and fun. With an average of 300 riders showing up each week, there's always a friendly wheel to find!

"Our group ride doesn't focus on w/kg or who comes in first or last," Nicola says. "We truly enjoy spending the hour talking with our supporters from all over the world, learning about their favorite aspects of Zwift, hearing their achievements, and especially the fun banter about food. Dad jokes are always encouraged."

Don't be surprised if you join the ride and find yourself riding next to a well-known name in the world of cycling. Nicola says, "It’s an environment that connects some of the best female IRL riders in the world with the Zwift Community. We also are frequented by legends such as Barry Bonds, Christian Van Der Velde, Bobby Julich, George Hincapie, and Zwift legends Kate Veronneau and Eric Schlange."

Other TWENTY24 team members often drop in and you may spot 3x USA Olympic gold medalist Kristin Armstrong and Canadian Olympic medalists Georgia Simmerling and Jasmin Duehring hanging in the bunch as well!

This ride began in June 2019 when Nicola was looking for fun ways team members could interact with the Zwift community leading into the 2020 Olympics games in Tokyo. This came after TWENTY24's introduction to Zwift racing via the inaugural KISS Super League:

"The team started racing on Zwift for the inaugural pro/am KISS Super League and we emerged as the top UCI team. The team started riding on Zwift a lot more as we realized we had a lot to learn, and through this we started meeting Zwift community members. We wanted to hold a weekly ride where they could ‘meet’ the athletes of TWENTY24." 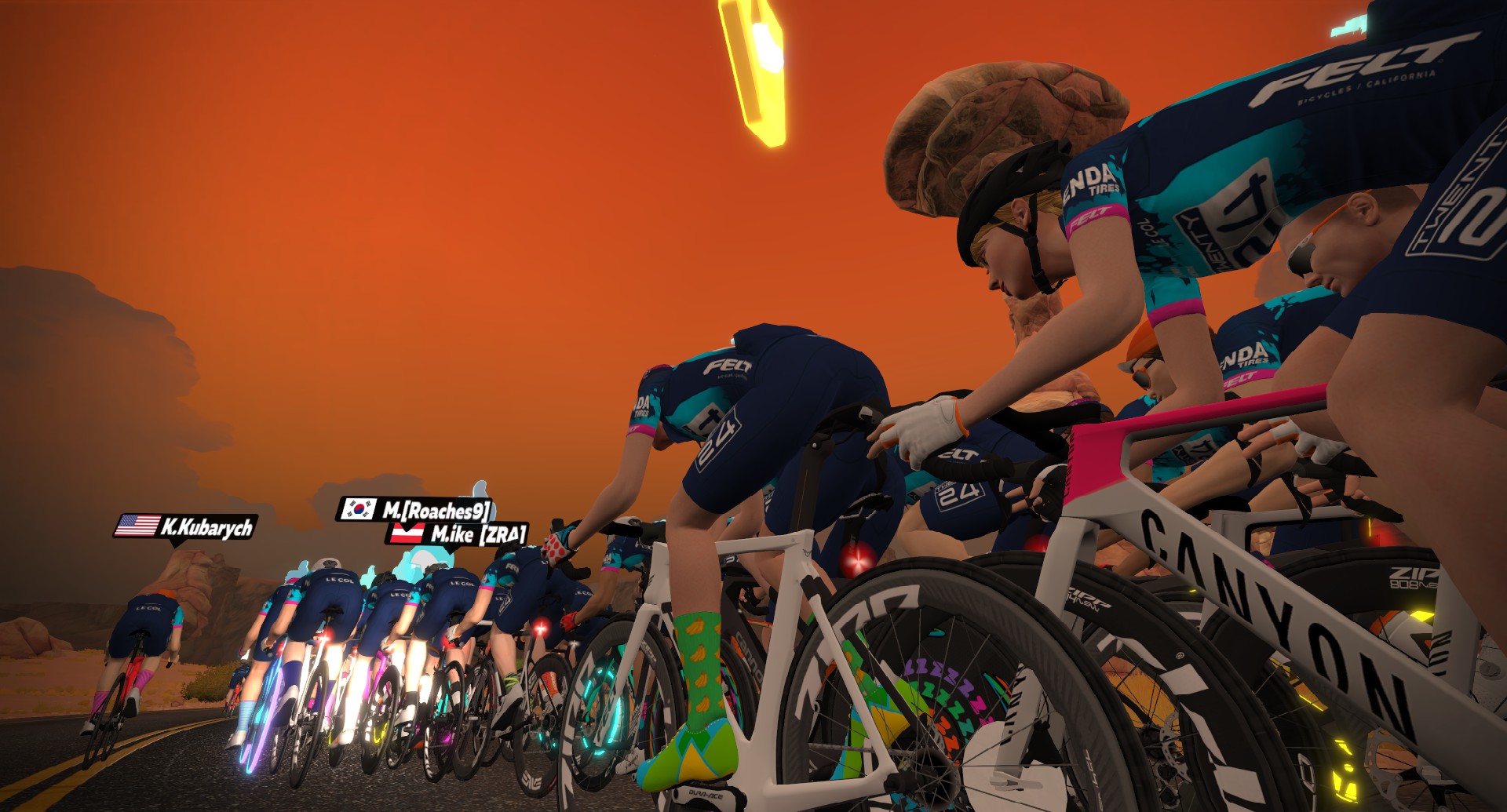 Ride leader Amanda Coker is a level 48 Zwifter. A 28-year-old hailing from Florida, Amanda has been riding and racing on Zwift for nearly two years, and has been with TWENTY24 for over two years. Her consistent weekly Road to Toyko leadership is impressive but not surprising considering her astonishing accomplishments on the bike:

The ride includes a crew of sweepers as well, all pro riders for TWENTY24: