“Somebody once said the Turtles is the fastest 90 minutes on Zwift; there’s a lot to do,” says leader Paul Smith.

While you’ll have chances to test your legs and even your virtual descending ability, the leader will be a steady beacon for you to follow if you just want a relaxed pace.

“This is a Cat D ride and we have newcomers, recovering riders, and convalescents who struggle with 1.2 w/kg,” Paul says. “For others, it’s an easy, chill recovery ride.” 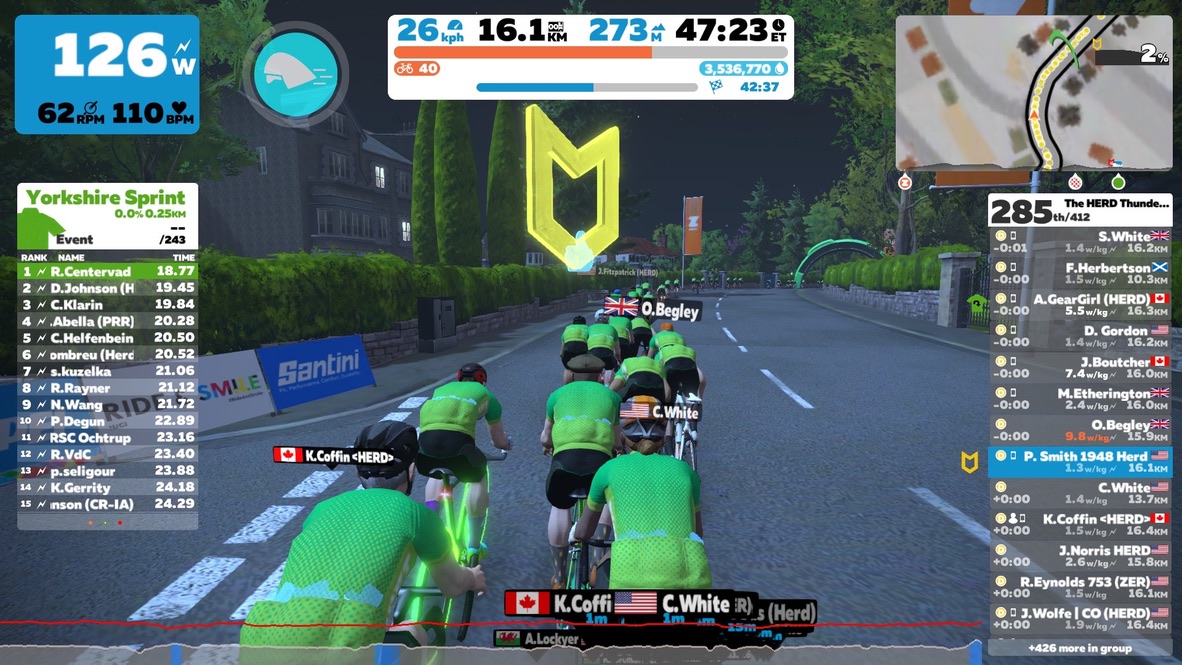 The Herd Thundering Turtles ride is an hour and a half at a 1.0-1.3 w/kg pace set by the leader. Sometimes riders are encouraged to sprint from the back of the group or go for a KOM/QOM (yes, Turtles can climb) before rejoining the bunch. The leader does not join them, though, aiming for a steady 1.2 w/kg the whole time. A team of sweepers works hard to bring riders back to the bunch if they fall off the rear.

Before leading the Thundering Turtles, Paul kept hearing complaints about people “flying” off the front of other rides or pushing the pace.

“So I went back to basics,” he says. “What makes IRL (in real life) group rides work? Sympatico people. A little competition. Conversation. Bad jokes. Pie.”

The Thundering Turtles ride doesn’t use the “fence” feature that tries to keep riders from getting too far ahead of the leader. Instead, the leader uses fun and games to entice people to stay with the group. (You’ll have to bring your own jokes and pie.) 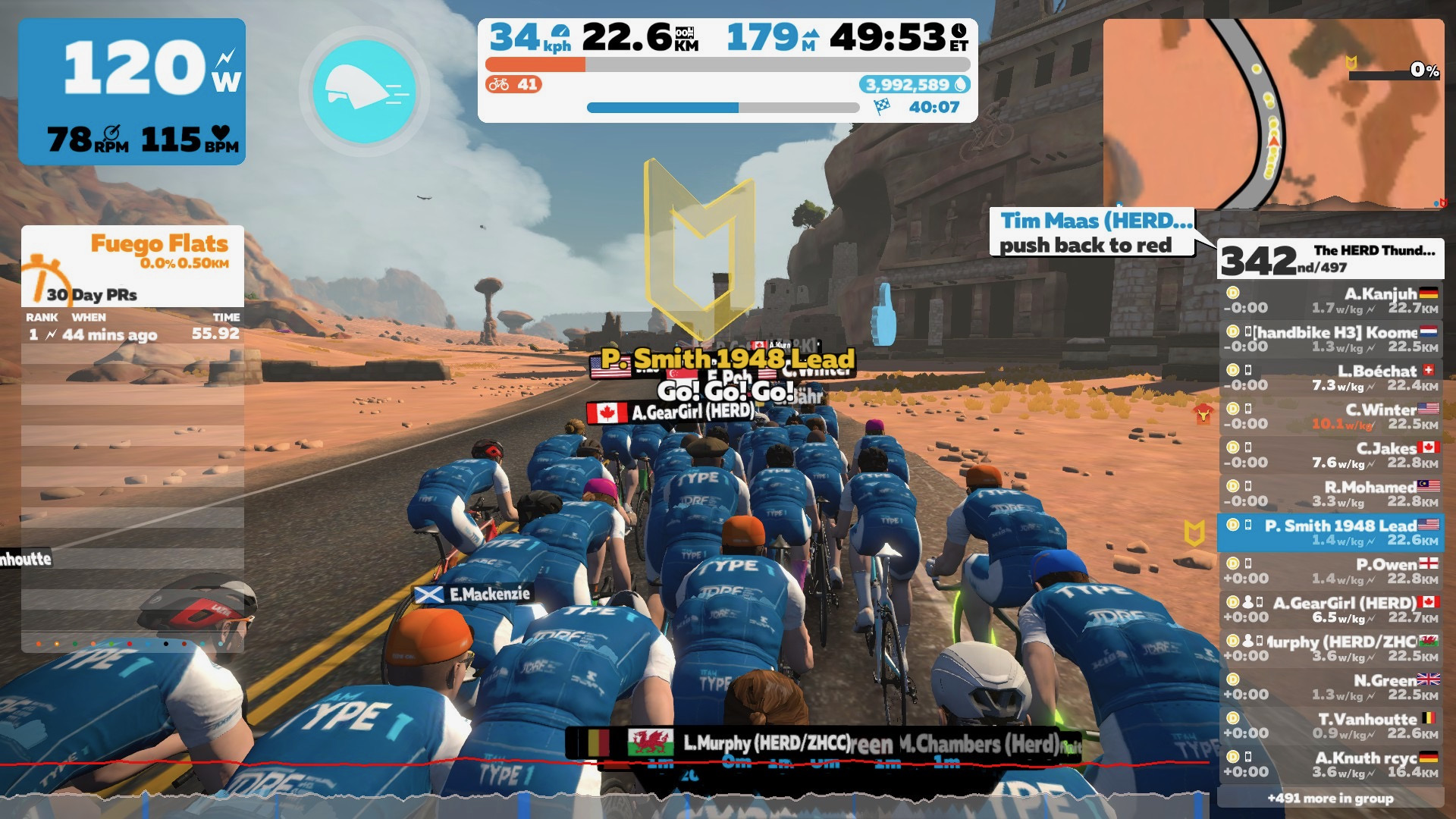 “My goal is to deliver the ride that we in the Herd advertise — and then to add as much fun as I can,” Paul says. “I’ve discovered that I can please some astoundingly different audiences. I watch singletons and groups ride away from the blob, but it would detract from the ride if I concentrated on them.”

The number of turtles on this thundering ride varies by the time of year: 250-350 in the Northern Hemisphere summer and 500-750 when it’s cold and rainy, especially in Europe.

“We have regulars fighting cancer, recovering from joint replacements and transplants,” Paul says. “We have newcomers both to cycling and Zwift. We answer questions and ask them.” 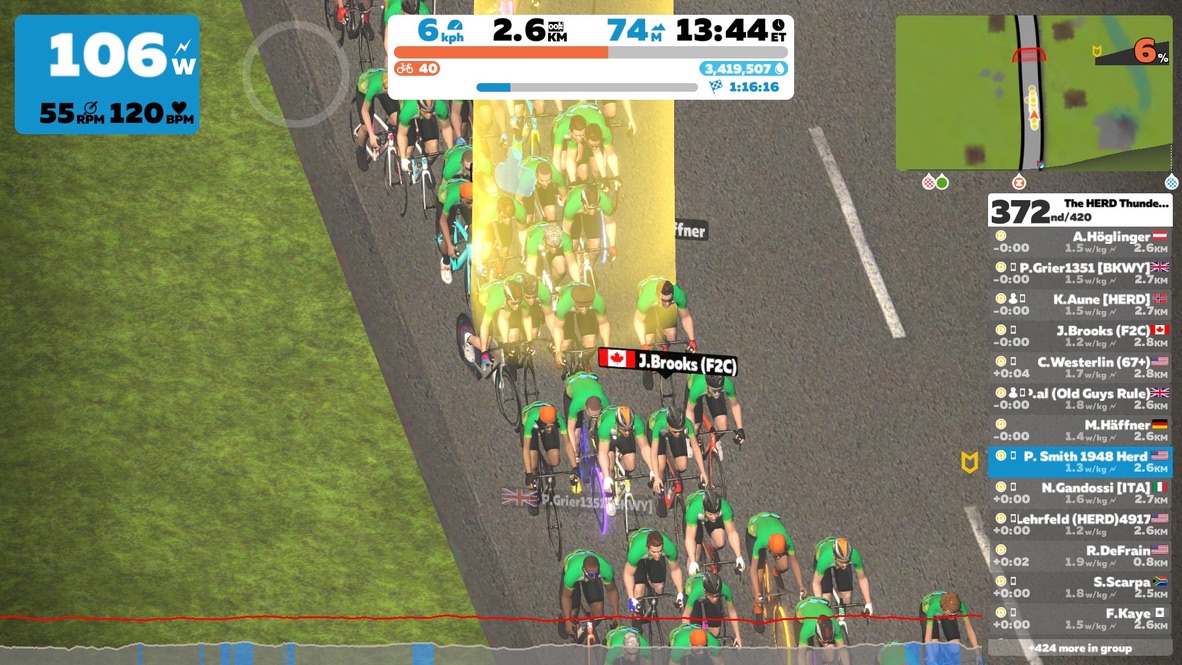 Elizabeth Allen, one of The Herd’s founders, started the Thundering Turtles before there was a Herd. Its basic structure is unchanged — a longer low-D ride.

Paul says, “I’ve led the Turtles since April 2019, when Elizabeth was adding hours at a bike shop for the spring rush. Elizabeth ran into some health problems and I’ve been at it since.”

Paul Smith is the main ride leader for Herd Thundering Turtles. Here’s his story in his own words:

“I’m a 72-year-old retiree who got into Zwift because I was too intimidated to ride Middle Tennessee’s roads solo. I’m the guy who couldn’t finish the easy Zwift rides in early 2018. The Herd’s predecessor was endlessly supportive and I progressed.

I eked out the 2018 Cervelo S5 with Zwift Academy paint largely because PACK’s Steve Clogg ran just one more sub-2.0 group ride and because 3R’s K. Thomas helped me through the last race. I’ve led low-wattage rides in two Zwift Academies, paying forward their kindness. James Bailey of the Herd Racing encouraged me to try racing. Now the Thursday WTRL Team Time Trial and the Thundering Turtles are the high spots of my week and I’m our developmental team captain in Zone 10.

You can learn a lot about The Herd and its events at theherd.club. You also can join The Herd Facebook group to join the club discussions and see photos from the latest Thundering Turtles ride.