Zwifters Meet to Run In Scotland

Earlier this month nine Zwift Runners from Europe and beyond convened in Inverness, Scotland to run the Loch Ness Marathon together, in real life!

It’s been incredible to see the growth of the community on Zwift Run over the years. Friendships have been forged through group runs, workouts, and events. People start to recognize the names of regular runners in events like Run in the Park, PACK Social, or 5K Down Under. And runners come together for specific events like the Watopia Run Festival or Zwift Academy!

In January 2021 we saw comedian Eddie Izzard run 32 marathons in 31 days on Zwift. As a result of that project, the Make Humanity Great running group was formed. The Film My Run live streams bring people together to run and chat and Zwift Long Distance Runners (ZLDR) is now the biggest running group on Zwift.

Zwift runners train together week in week out to run races and events on Zwift. The story of how nine Zwifters came to run the Loch Ness Marathon IRL is lost in the mists of time. But it has its roots in the ZLDR group.

Zwifter Amanda Alison had signed up for the marathon and during conversations on their regular group runs, she had mentioned it and perhaps it was Paula Whitelaw who suggested they try a real-world meetup in Scotland.

Before long, word had spread and Kevin de Luca from France signed up as did ZLDR founder Jens-Eric Rasmussen from Sweden. Emma Steeley, Nick Lloyd, Peter Barlow all joined from the UK and Cecilie Førland from Norway signed up. Grace Shin put the USA in the hat and finally, Neil Whitelaw was thrown in at the deep end because of an injury to his partner Paula who was one of those who’d had the initial idea.

Team Nessie, as they were now called, set up a training group. They met almost daily to run together on Zwift, following an 18-week marathon training plan. As it transpired many of the group were looking to run a similar marathon time of 4-4.5 hours. 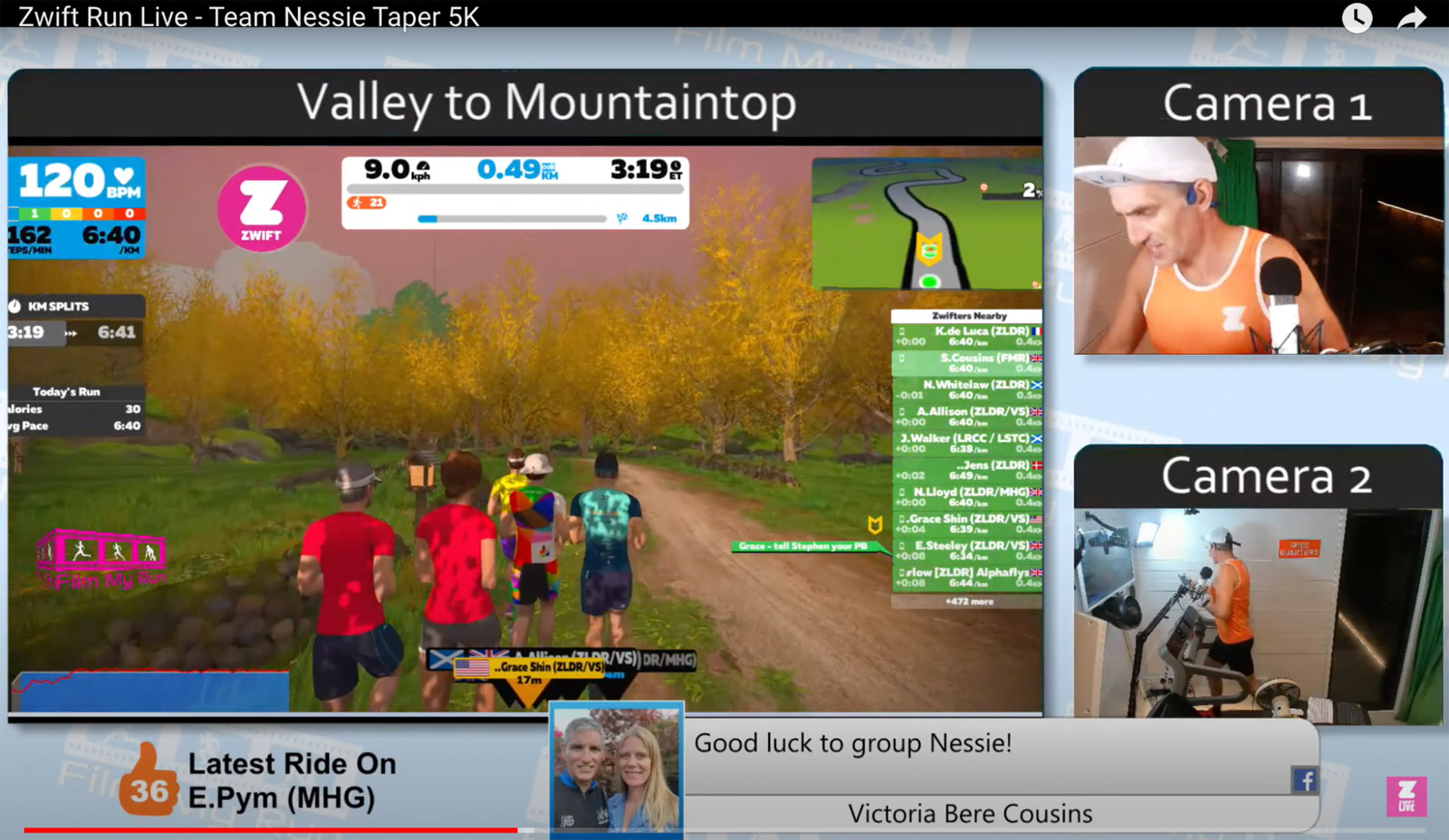 The bond between these guys grew stronger every day. Despite having never met in person they spent so much time together on Zwift that they felt close to each other, as you might in the real world when you have shared interests and experiences.

After flying in or driving up to Inverness, some of Team Nessie met for the very first time at the running expo to collect their race numbers. In the evening, everyone sat down to eat together. Of course, pasta was the main course for many and the atmosphere was one of excitement and nerves ahead of what would, for some, be a first-ever marathon. 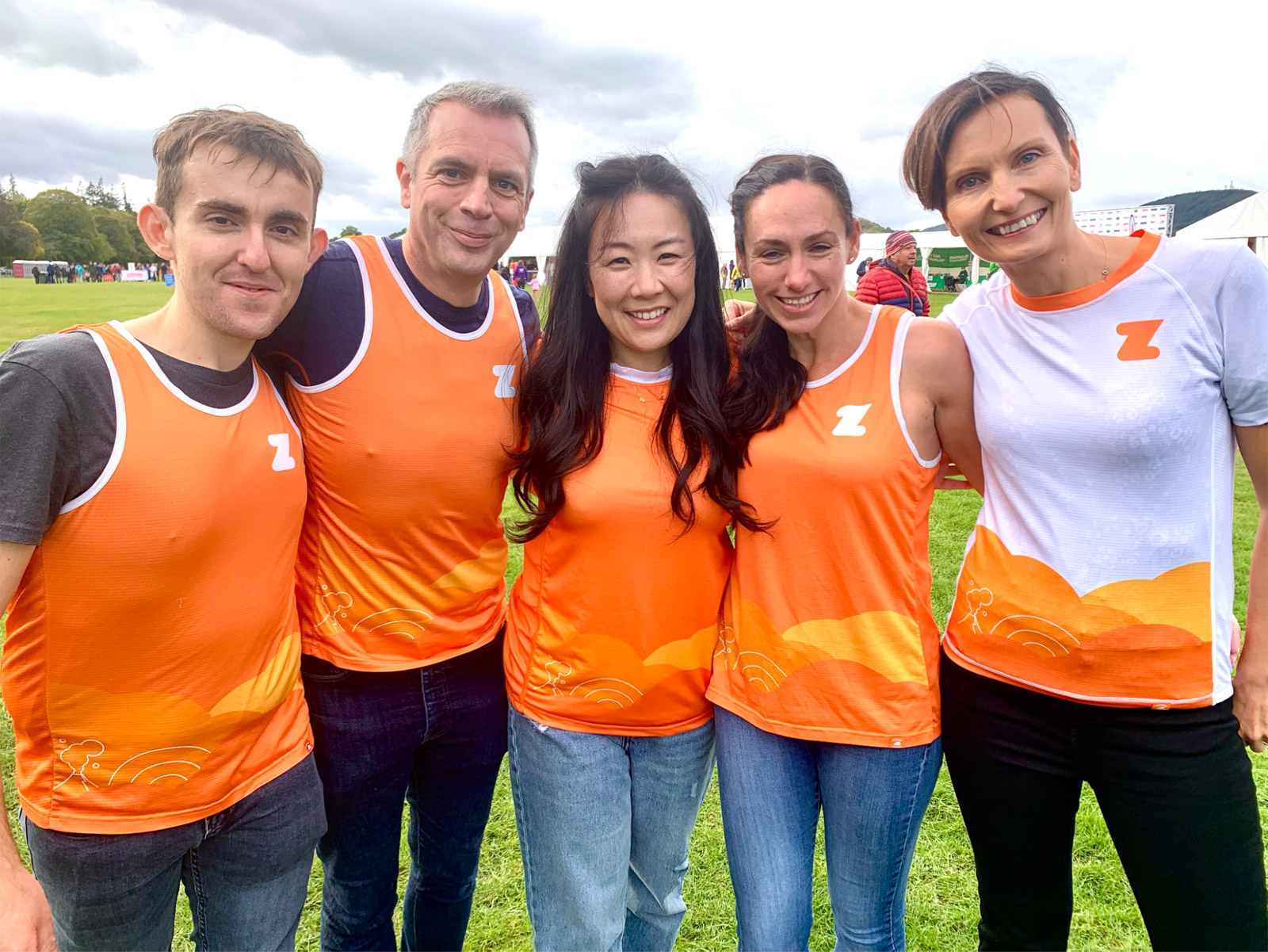 Loch Ness Marathon is a point-to-point road race along the banks of the famous loch. Runners are taken by bus to the start and then run the 26.2 miles back to Inverness. The course is a little undulating but overall it can be classed as a flat marathon. In fact, overall it is net downhill.

Having eaten and rested well, the next morning everyone was keen to get on the transport at 8am. The team arrived feeling appropriately nervous, but also energized and confident about what was to come! 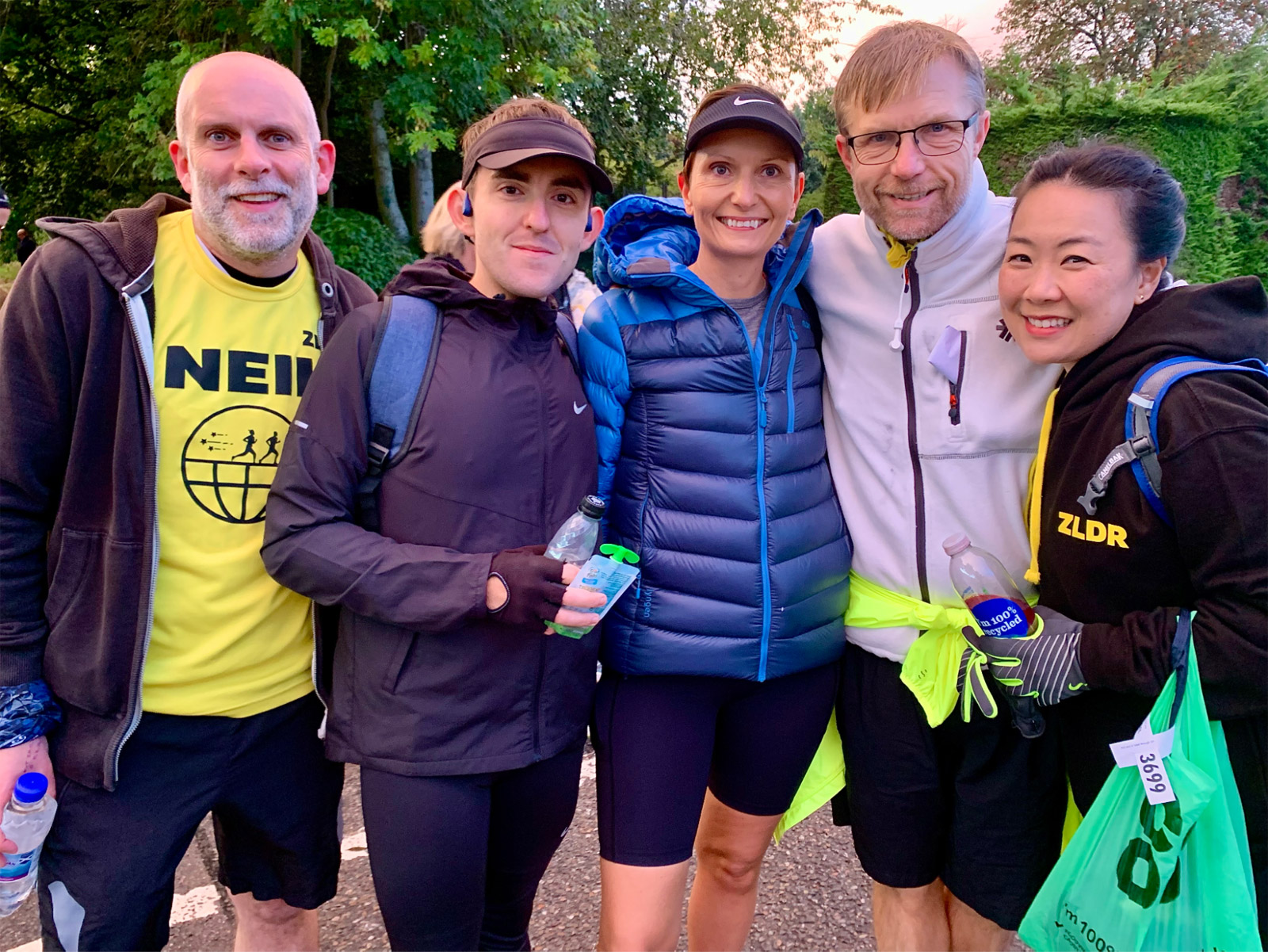 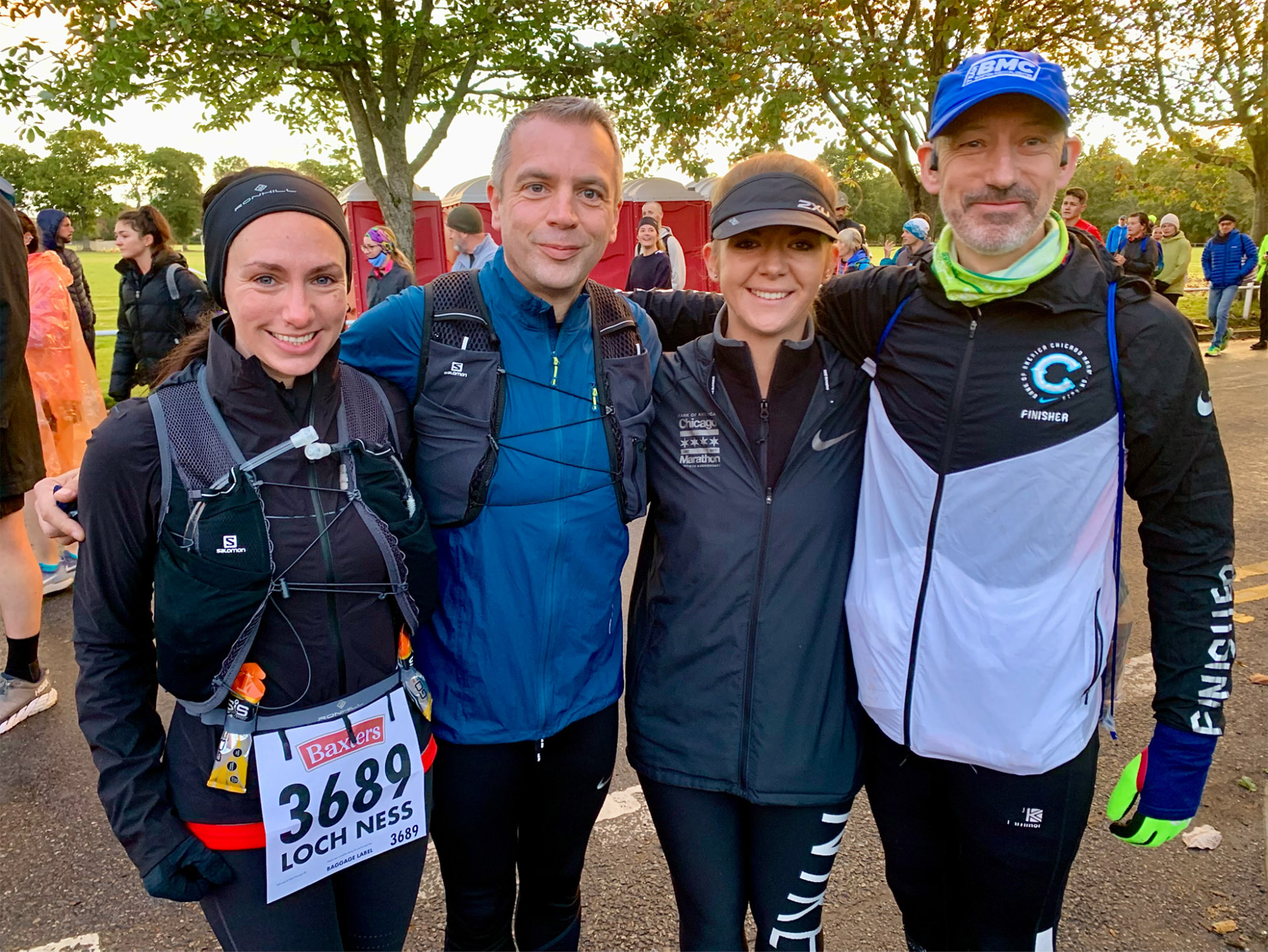 Initially, Team Nessie had planned to stay together for as much of the run as possible. However, from early in the race it was clear that despite having similar time goals, people wanted to manage their race in different ways.

Nick, Cecilie, and Amanda wanted to try and maintain an even four-hour pace from the off. Grace was looking to ease slowly into the run. Jens and Neil were taking things conservatively, and Emma was the most cautious initially.

In true Zwift and ZLDR tradition, Kevin stayed with Emma the entire run. He said his goal for this marathon was to help anyone who needed it, rather than go for a time himself. 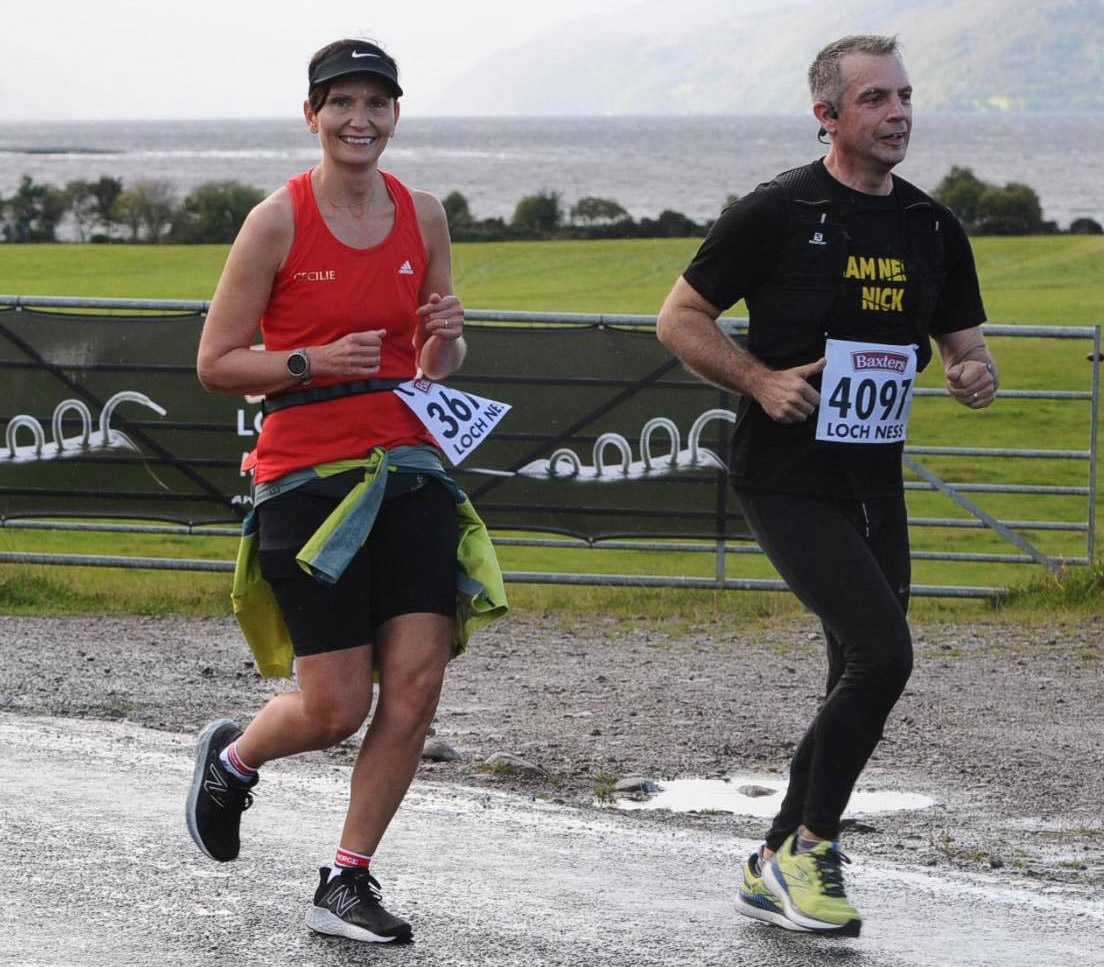 From the halfway point things started to get serious. Emma had found her feet and was making good progress. Cecilie was maintaining 4-hour pace like clockwork. Grace was speeding up and picking off runners ahead of her. Jens and Neil were comfortably clocking off the miles but slowing a little. 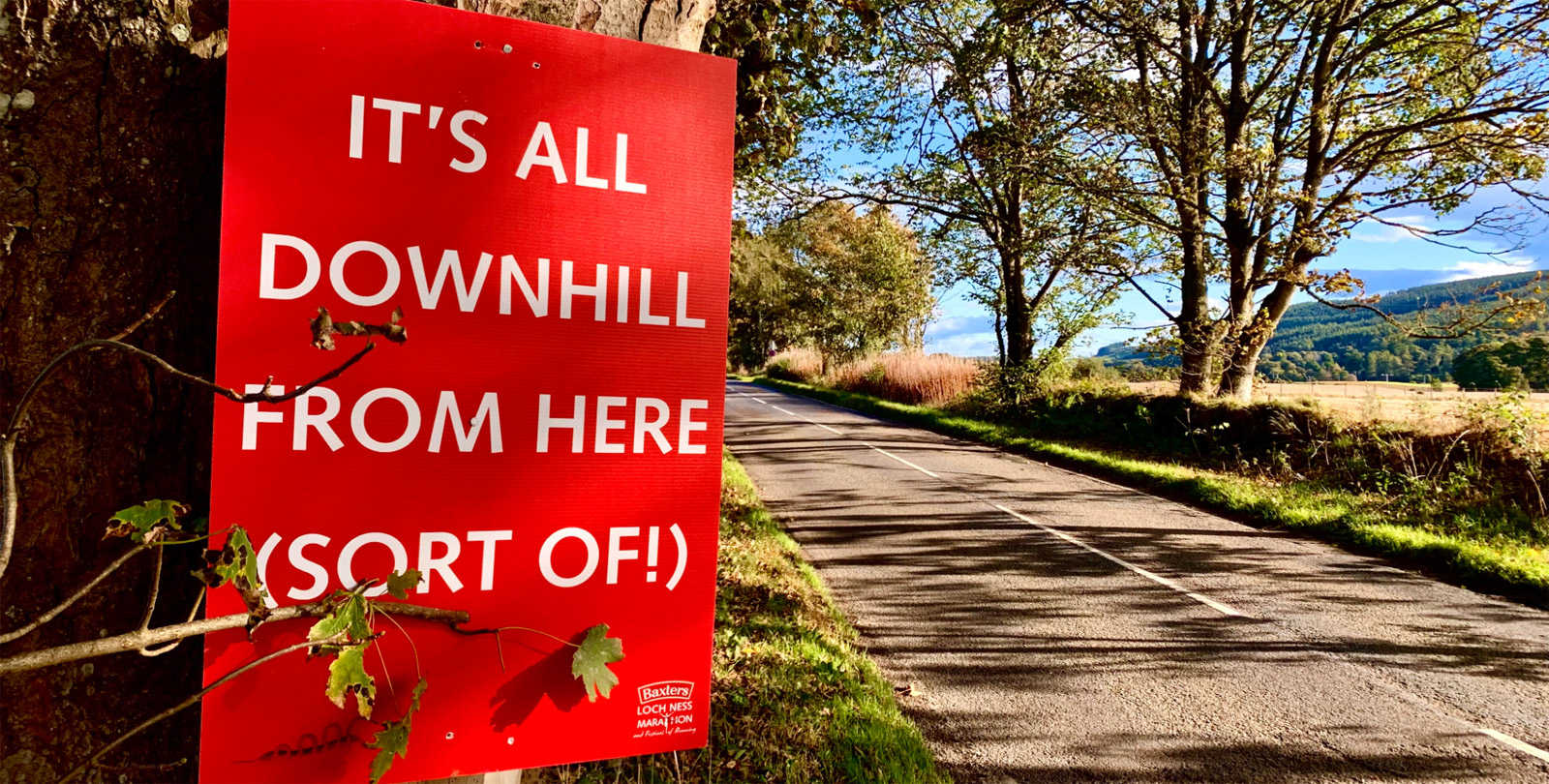 A sign approaching the top of one of the hills

With 10k to go, Amanda and Nick were starting to tire. The 20-mile mark can provide some tough lessons for new marathon runners and it was no exception here. Grace got the fire in her eyes and pushed on. By now there was no stopping Cecilie. 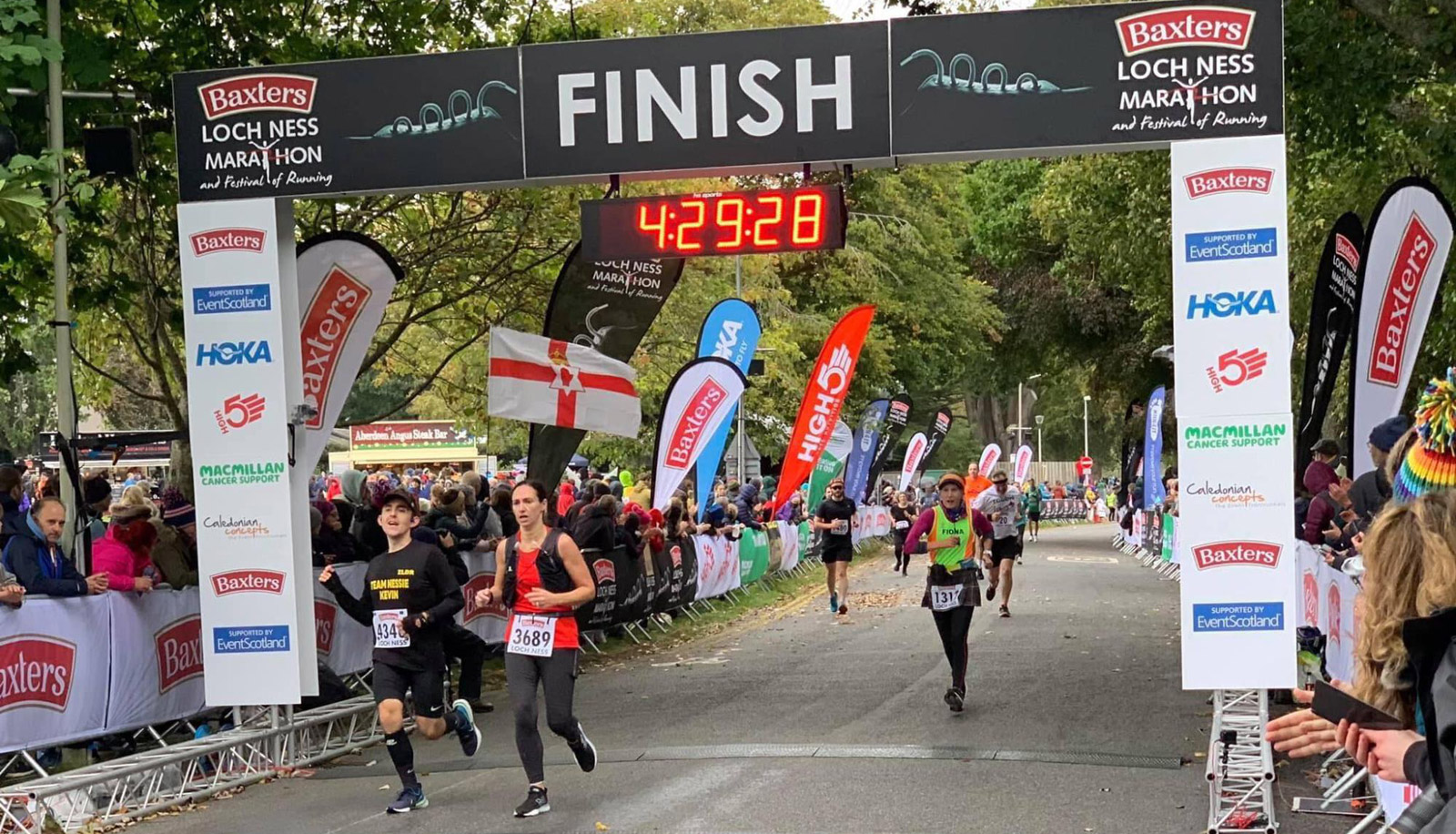 Crossing the line in 3:57, Cecilie Førland made it home in her goal time. With a tremendous push in the second half, despite some leg sapping inclines, Grace managed a 4-minute negative split to come in 4:04. 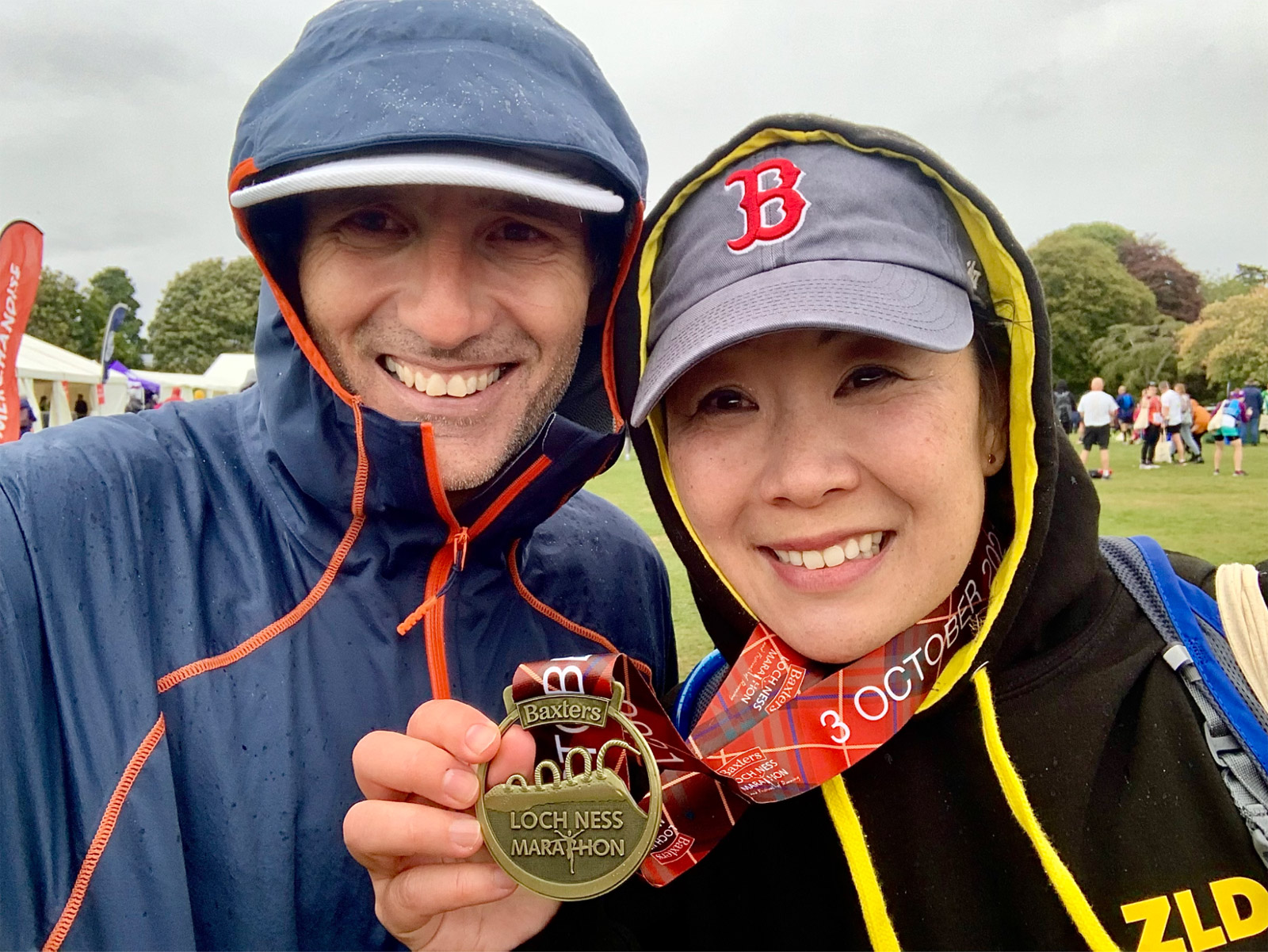 Grace Shin with her medal and Stephen from Film My Run

Neil Whitelaw, Nick Lloyd, and Jens-Erik crossed the line together in 4:13, closely followed in 4:17 by Amanda and Peter. Emma and Kevin made it to the finish in 4:28, meaning that every Zwift runner completed the Loch Ness marathon in under four and a half hours.

The weather had been unpredictable to say the least. During the race it was cold at times with dark clouds and some rain. But then suddenly the clouds would clear and there would be blue skies and sunshine! There was even the briefest glimpse of a rainbow over the loch at halfway. 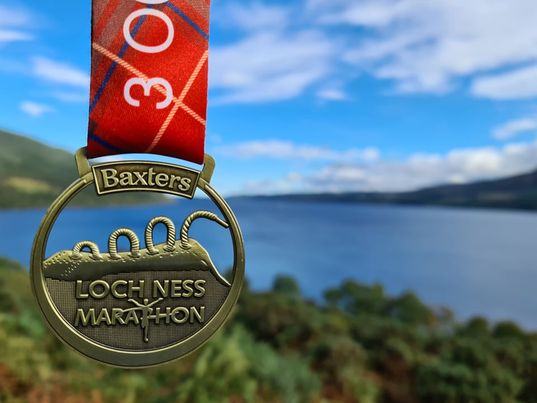 But once across the finish line, it definitely turned colder and Team Nessie escaped to the comfort of their hotels to prepare for the evening celebrations. 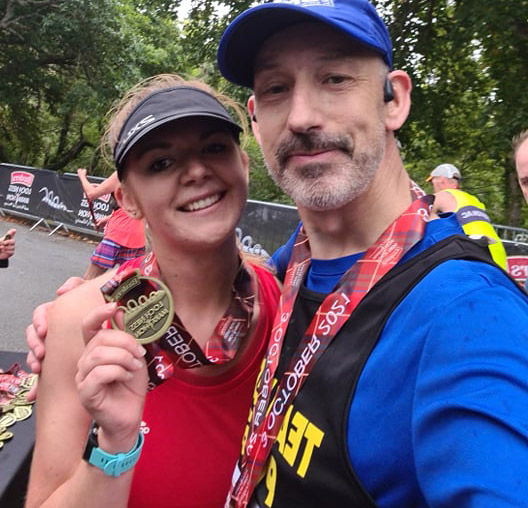 It was a terrific evening. Having never met each other in person before, Zwift’s own Team Nessie had now fully bonded. The journey complete, the adventure almost over, it was a happy and emotional evening savoring good food and the company of real friends made in the virtual world.

A few days later and everyone meets up: usual time, usual place for another Zwift run. There’s lots of text chat and someone mentions the idea of Copenhagen Marathon in 2022… 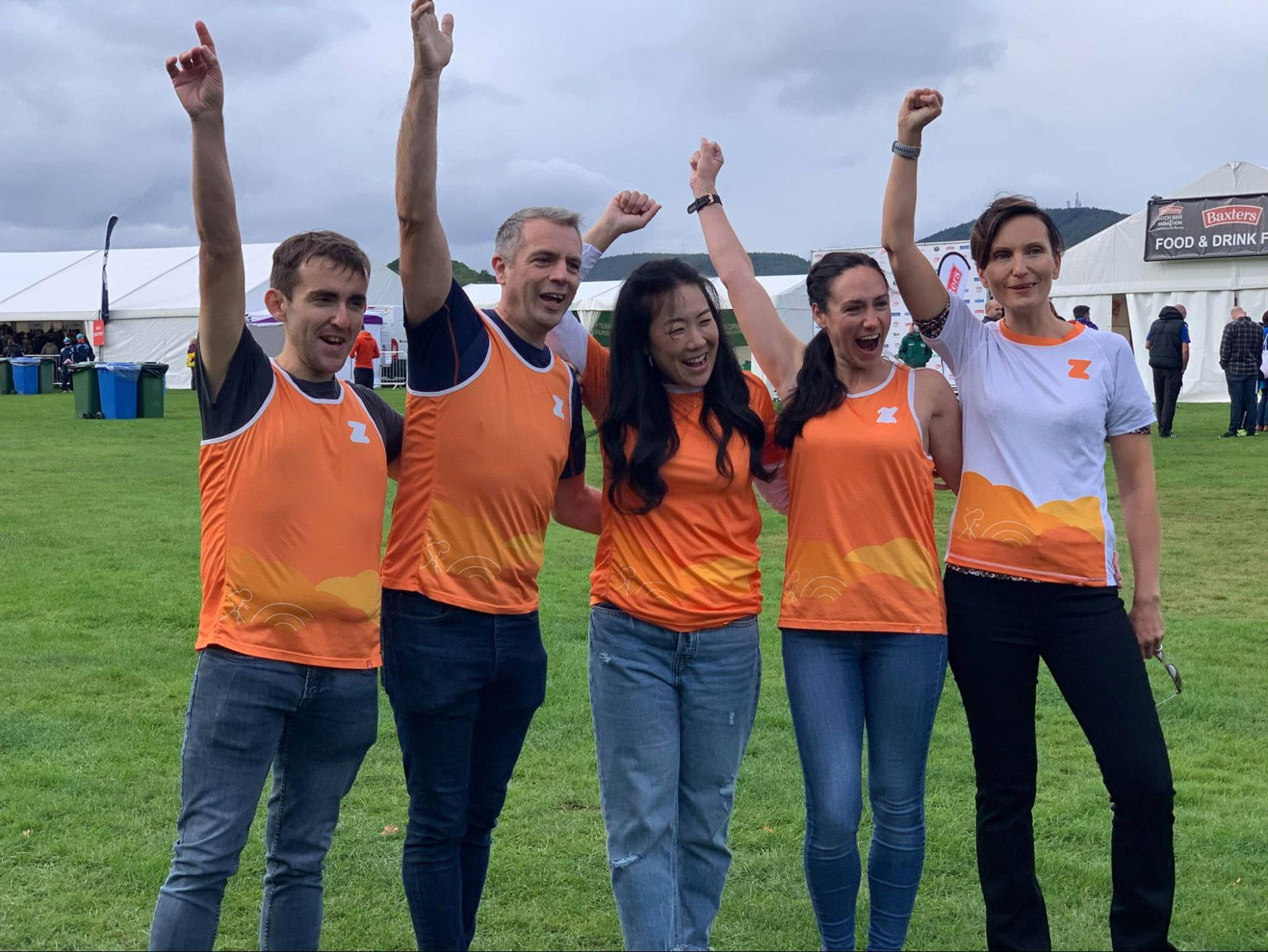