Arran Leach: Motivation To Get Stronger

Arran Leach loves working with his USMES team during Zwift Racing League, so he decided to bring that to his group rides.

Each ZRL season, Leach and his teammates hold race simulations in the Hawaii Pineapple Ride. One leader will guide a race-pace effort, while another may be leading out sprinters who are going for points for being first across the line. If a team time trial is coming up, participating teams are invited to set out one at a time.

“I wanted to create something different,” he says. “Our whole philosophy is making riders stronger.”

Zwift Racing League, hosted by Zwift and WTRL, is a seasonal race series with a team-based format. This encourages teammates to work together and allows different types of riders to take on different roles. In points races, participants can earn points for their team by going for a high finish placement, or they can target sprint and climb segments along the route. During team time trials, teams race against the clock to reach the finish together as fast as possible.

When ZRL is between seasons, the USMES Hawaii Pineapple Ride focuses on different aspects of race training each week. They might practice sprinting, end with a maximum effort up a climb, gradually ramp up in power for 20 minutes, or send some riders off the front and tell others to chase them down.

Leach took over the event when its two leaders, who were based in Hawaii, could no longer lead it. He talks a lot about how it’s going to hurt, but the ride’s goals are all about helping the community.

“The way you get stronger is by going against people who are harder than you and stronger than you, and you just have to push yourself beyond your normal limits,” says Leach.

After all, he’s speaking from experience. 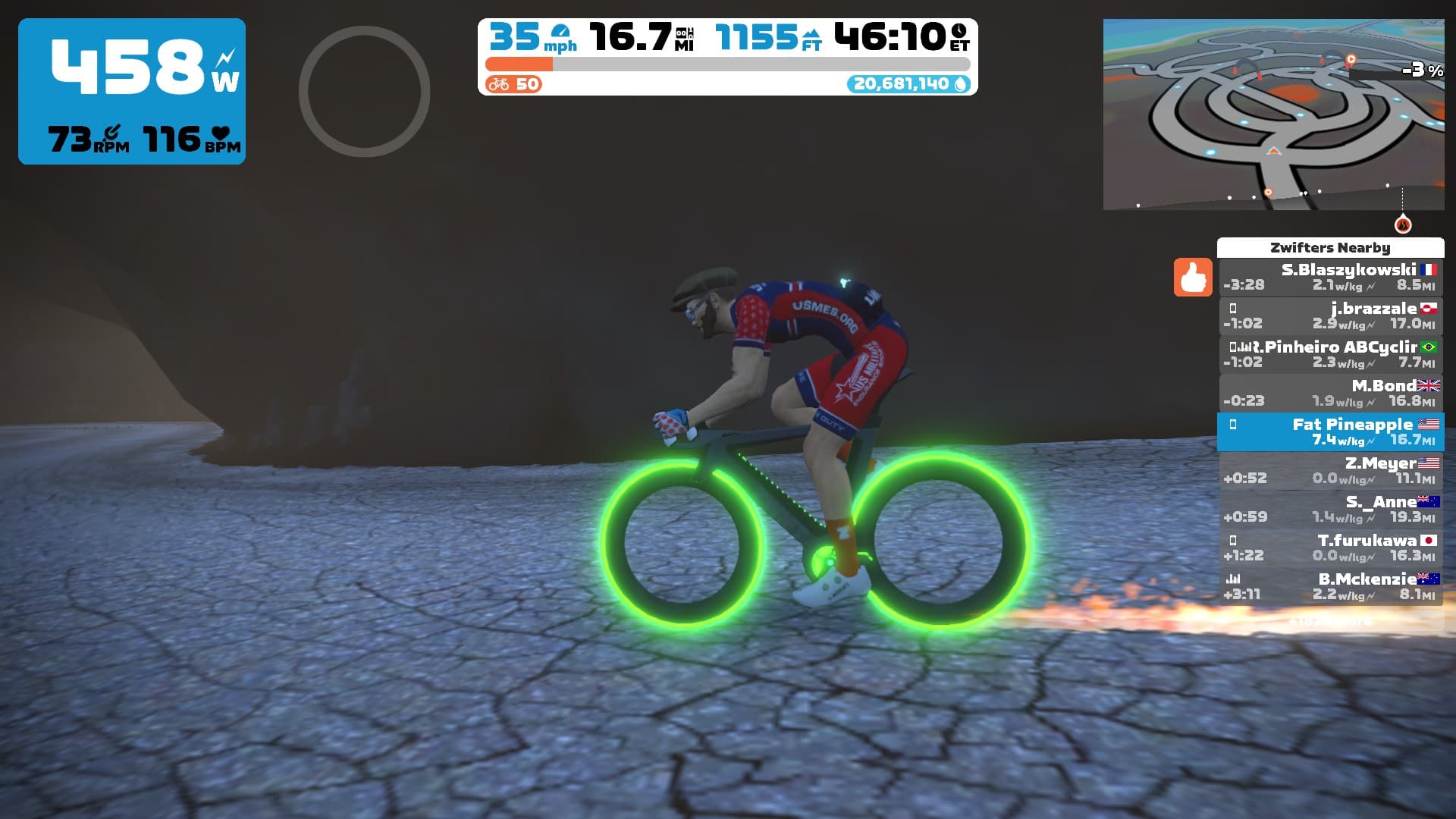 Leach joined Zwift at the start of 2019. He joined some USMES (US Military Endurance Sports) group rides and started helping the sweepers pull riders back to the group. He loved their community spirit and the way they rode together. A competitive triathlete by nature, Leach told them he would love to join their race team if they had one.

In 2019, USMES didn’t have enough racers to field an A team and a B team at the same time, so they made an A team of three A riders and three B riders. Leach himself was on the low end of the B's.

The B racers were left to fend for themselves in points races. In team time trials, though, everyone has to work together. Racers save energy by riding behind teammates in their draft, then take turns “pulling” the group at the front.

“It was hard, because we had to park our egos,” he says. “We wanted to help by pulling, but by doing that, we were blowing our hearts and legs up. The A's said, ‘Hey guys, we appreciate that you’re wanting to pull, but you need to just sit in.’”

For their second season, USMES rounded up a few more people, and Leach began racing in a proper B category team. There, he could finally be competitive. He and the team weren’t high in the standings at first, but they got better each season, until Leach says they “dominated” the latest one they finished.

To learn more about USMES on Zwift, check out their Facebook group

Part of the Family

Racing with a team brings a different kind of motivation than racing solo, Leach says. You don’t want to let your teammates down. If something goes wrong, though, you have teammates who can help.

Leach recalls one teammate who is normally a climber but was struggling in a flat team time trial. Leach went back to try to pull that teammate back to the group, but the other racer couldn’t hang on.

Getting the “OK” to go on alone, Leach dug in deep to make it back to his team. But now he was the one struggling! The rest of the team protected him as they kept working.

“I sat in the middle and recovered for as long as I needed, and they kept skipping me on pulls,” he said. “We still managed to win the TTT!”

The USMES team also has a great time in their team chat, both in and out of races.

“The A's were so serious, and there was very little activity on chat,” Leach says. “In the B's, we’re just poking fun at each other. We have a lot of fun.”

Teammates may rib each other and joke around, but they also support each other when they need it most.

“I’m not military, and I’m not from America, but they’re like my brothers,” he says.

Leach is from England, but he moved to Wichita, Kansas, over a decade ago for work. As he travels around for Ironman triathlons, he meets friends from his team in real life.

“Two guys live in Tennessee, and for Ironman Chattanooga, I stayed with one of them,” he says. “The other guy met us at 7:00 in the morning for a ride.”

Leach visited another teammate in Virginia just to ride with him in the mountains, and he met another twice at separate Ironman races. Each time, they welcomed him like they had known each other for ages.

“Zwift racing inadvertently has paved the way to some really cool stuff in my life,” he says. “I’ve had the opportunity to race and meet these great people who welcome you into their family, no questions asked.”