Twice a week, the BMTR Faster Masters roll through Zwift like a freight train. They’re putting down serious power, but they don’t take themselves too seriously, trading jokes and encouraging remarks the whole time.

This event is one of the few on Zwift paced at 4 w/kg that isn’t a race. It’s fast, friendly, and fun. The ride is targeted at “masters” athletes - usually defined as those over 35 - but anyone of any age is welcome to join.

“What makes our group special is the pace of our ride and the lack of the use of a fence or sweepers,” leader Paul Bybee says. “We also focus on being positive and encouraging, and attempt to be funny and lighthearted.” 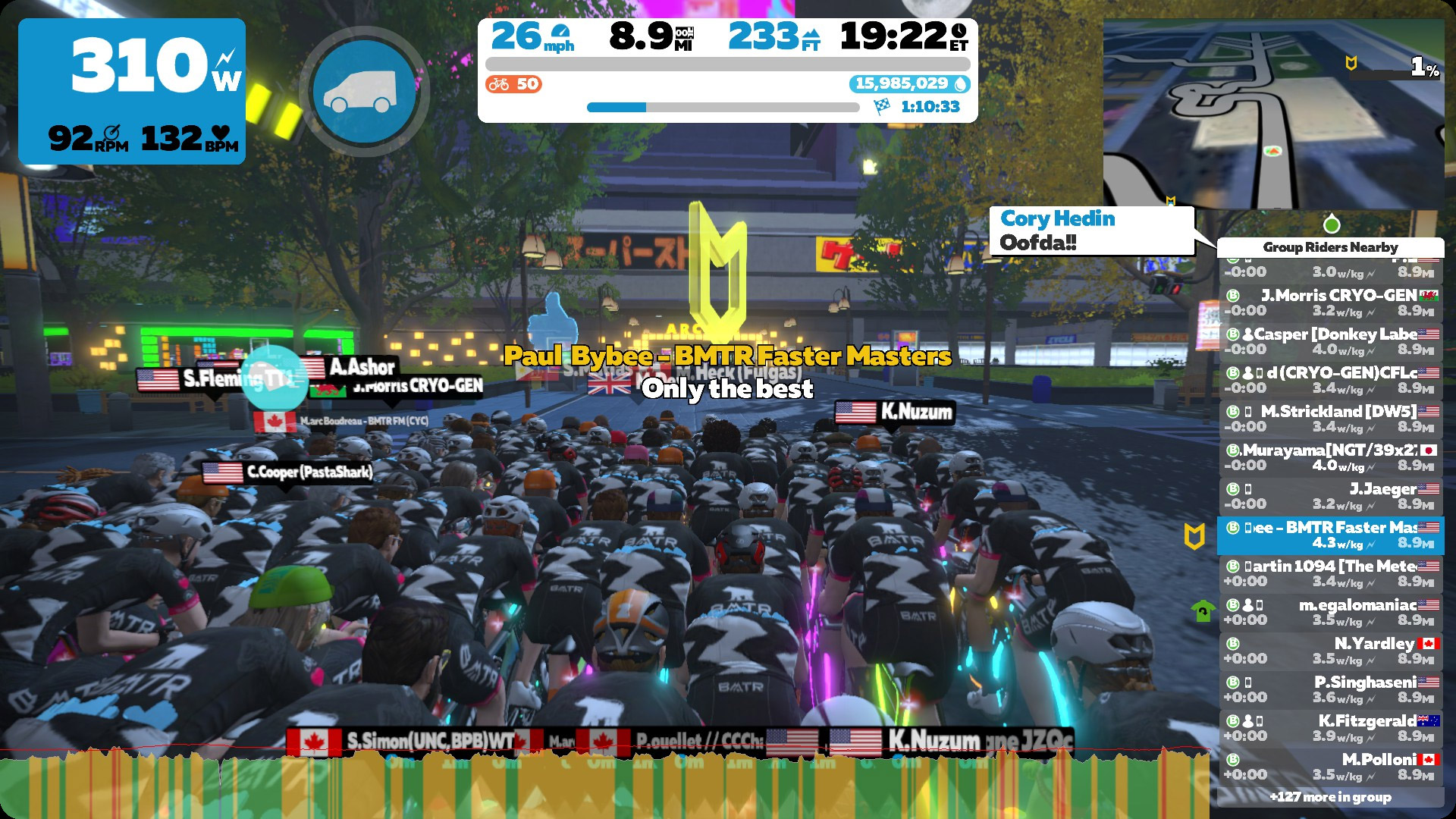 The Faster Masters are true to their name! They start with a 5-minute warmup at 3 w/kg, then ramp it up to 4 w/kg for the rest of the ride.

“That is for a rider of roughly 80kg, so your effort will be harder if you are lighter and easier if you are heavier as we usually ride flatter courses,” says Bybee. “We stay true to the pace advertised, and often have an after-party or mini race after the official ride ends.”

There are no sweepers to help struggling riders, but the group is still welcoming to those who might not be able to keep up the whole time. The ride sticks to flatter routes, which allows a big group to form and helps riders stay in the group with a strong draft effect.

“Our goal is to support riders with encouragement, and if riders are dropped, we ask them to return the following week with a goal of riding 1 minute longer in the beacon group,” he says. “With this approach, over the years we have seen tremendous growth in riders that could not stay for the duration. Often now those same riders help lead at the front for the entire ride.”

Typically, there are about 100 to 150 riders participating in Faster Masters, with a core group of regulars. Expect to see many of the same names each time. You’ll get to know your fellow riders if you keep coming back, and this friendly group will make those 90 minutes fly by.

When you see a message saying “go go go,” that’s the start of the afterparty race to the next sprint point or banner.

“If the pace sounds too fast, come challenge yourself and stay as long as you can,” says Bybee. “Then follow that up the next week with a goal of staying longer. If you challenge yourself, you will be amazed at how you can improve your fitness.”

Leaders for BMTR Faster Masters include Paul Bybee, Steve Pequignot, and David Cleasby. All three are seasoned Masters riders with a background in racing. Bybee started out as a competitive runner in distances from 5k to the marathon, then moved to cycling in the mid-1990s and has been competing in the cycling discipline since that time.

Paul Bybee started Faster Masters about 5 years ago. He was looking for fast-paced, longer rides during the week and couldn’t find any. He says:

“The group was named Faster Masters to attract other Masters riders, but at the same time, it is open to all riders. The goal of our ride is to provide a positive vibe in a fast-paced ride while encouraging others to improve and stay with the group.”

When choosing a name, Bybee was torn between “Faster Masters” and “Faster Dad Jokes.” Expect some banter and jokes during the rides!

After a few years as an independent group, the ride became part of the BMTR community. This has been a great fit because their cultures are strongly aligned. BMTR is short for Bear Mountaineers, “a group of cyclists who enjoy Centuries (100-mile rides) and Endurance Rides with challenging climbs either outdoors (to Bear Mountain or the like) or indoors on Zwift.”

You can find out more about the Faster Masters ride at its Facebook group, BMTR Faster Masters. To learn about BMTR and its other events, visit the Bear Mountaineers Facebook group or join their Club via the Companion app. See upcoming BMTR events at zwift.com/events/tag/bmtr.