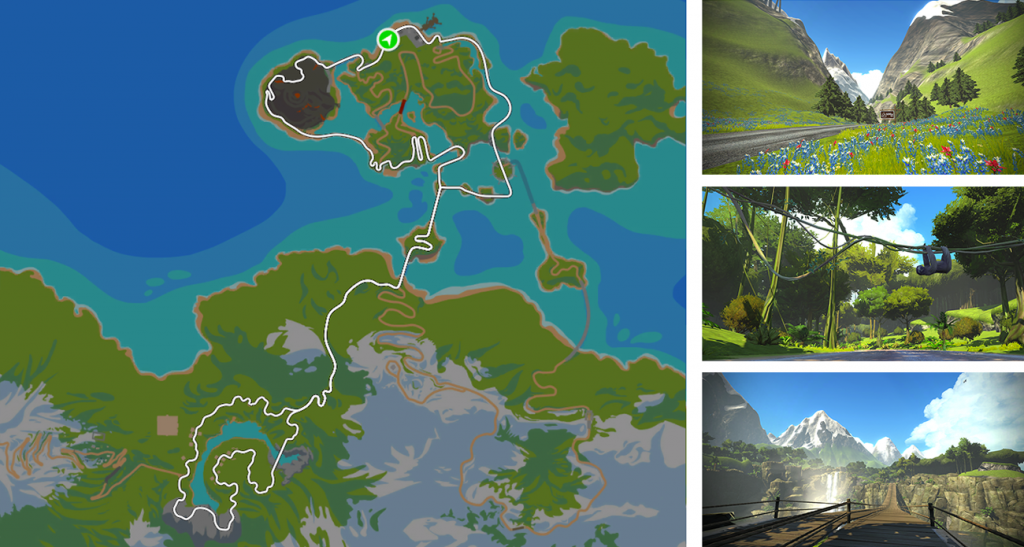 Get your gravel fix with the Road to Ruins route. You’ll explore a Mayan Jungle complete with rope bridges, temples, waterfalls, caves, and the ruins of a lost civilization. Unlike anything else in the world of Watopia,  the Mayan Jungle provided the perfect digital canvas for our game artists.

Starting at sea level, you’ll spin up the gentle climb to the start of the jungle loop. Before you reach the jungle, you’ll pass the bluebell field. The flowers mark a defining visual checkpoint before the landscape changes in a big way.

And even if you don’t stop and smell the roses bluebells, know that each was planted with care. Every flower that you see is different. Size, color, angles, and grouping — each meticulous detail required as much sweat and determination as nabbing a personal PR.

A little farther on, you’ll descend to the start of the jungle loop. At the fork of the jungle loop, you’ll encounter the Jungle tri-totem. Look closely, and you’ll notice the tri-totem has three different faces. Miguel Rivero, a 3D artist, created these faces from his imagination and although he worked a lot on this route, the tri-totem is his favorite element because it sets the tone for the Mayan Jungle and gives the Road to Ruins route its identity. 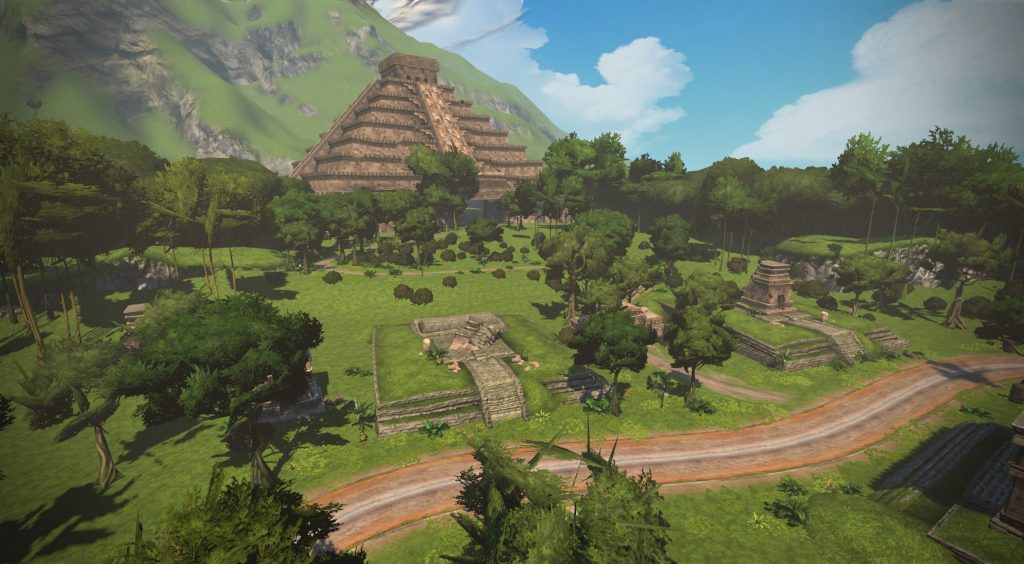 Making buildings represent something familiar to real life requires correct dimensions are significant care to detail. Since Mayan ruins are supposed to look ‘broken' that aspect is less critical. At least for our application. (Sorry, archaeologists.) In terms of poly count — the digital building blocks our game are made from —  the ruins are considered low ‘cost’ to create as they are made up of 1,800 polygons.

In comparison, some buildings are north of 20,000 polys. At Zwift, the polygon count is the measurement of the cost of development. Cost and game detail are always balanced. To produce high detail at a low cost, the design team of  9, pulled some technical tricks from their sleeves to form the dense canopies around the jungle with a low total polygon count which historically is complicated and time processing to do. Finishing off the magic of the Jungle are the fireflies that float around in the dark areas that Jon Mayfield, co-founder, and chief game designer, hardcoded into the game.

How this works is a mystery to everyone but Jon.