When Scottie Weiss became the first Zwifter to ride a century, I knew I had to catch up with him again.  Again you ask?  I first interviewed Scottie in 2002 after he won the Elite Men’s National Road Championships, so I was not surprised that Scottie was still as dedicated as ever and cranking out the miles.  Scottie shares his thoughts on racing, balancing training with work and family and of course, Zwift.  Enjoy!

Z: Tell us about your background in cycling.

SW: I've been racing for over 18 years and worked in the bike industry as a graphic designer for most of that time as well. My racing has been done in the US with teams like Zaxby’s, West Virginia Pro Cycling, AEG/Toshiba, Kenda 5-hour Energy Pro Cycling, and others. I've raced the UCI World Cycling Tour Final twice and plan on going after the world title again this year! I'm also a past Elite Road Champion (2002) and Masters US national crit champion.

Z: Congrats on being the first Zwifter to ride a century - 100 miles in a single ride. You followed that up two days later by riding 133 miles. What is it like to ride five-plus hours on Zwift? 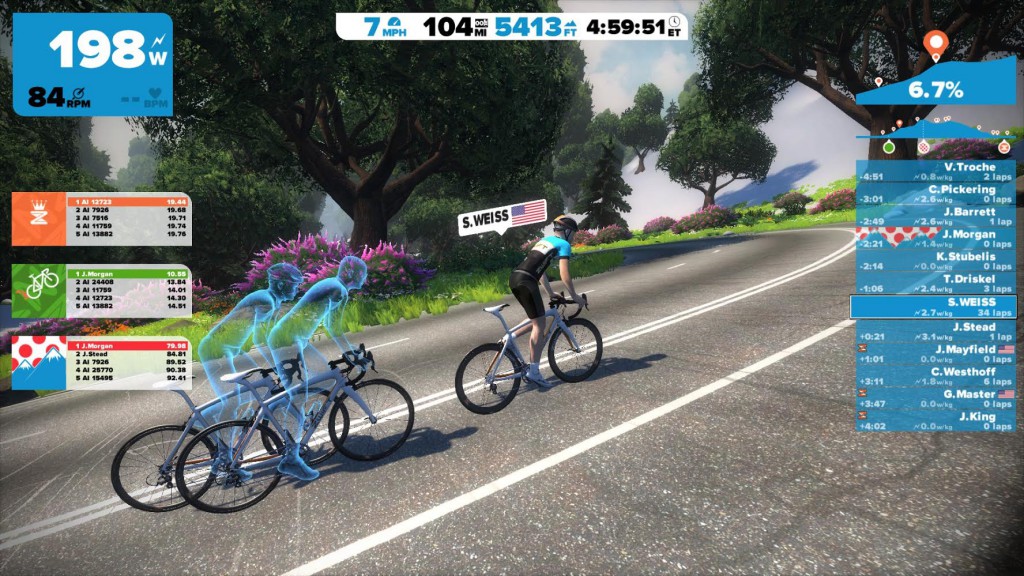 SW: Thank you! It’s amazing how Zwift makes riding indoors so much more enjoyable, even fun! Workouts are very similar to that of a ride outside, and the interaction with so many others from around the world is something you can’t get anywhere else. Don’t get me wrong; it was work, but very much more enjoyable using the Zwift platform!

Z: Did you take any breaks during those rides?

I did not take any break for these two rides. I was working so hard at times that I simply got lost in the ride! 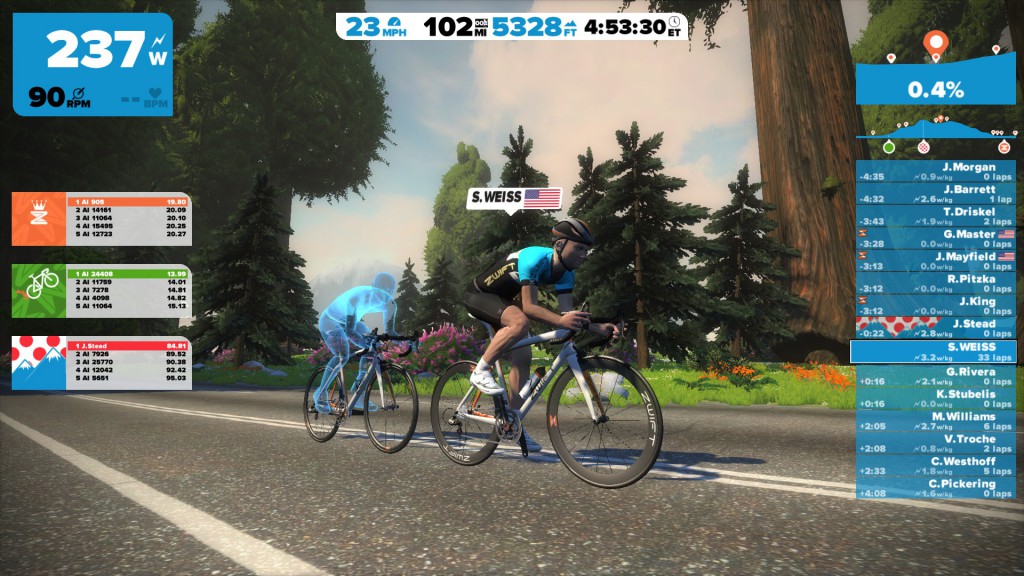 Z: What do you eat and drink when you ride that long?

SW: Water and Gatorade to drink. As for eating, it’s a mix of Power Bar and baby food packets: they’re easy to eat, and I can find them in any grocery store. I typically eat the same stuff out on the road as well.

Z: How do you balance the intense training you do with your work and family?

SW: My family support is unbelievable! I’m truly lucky to have Trina and Noah. I share my time, but my family always comes FIRST! In return, they share time with me during training, either by moto pacing me or just listening to me ride the trainer for hours. Honestly, it’s not always easy, but nothing is in life. It takes work that I’m totally willing to put into it! 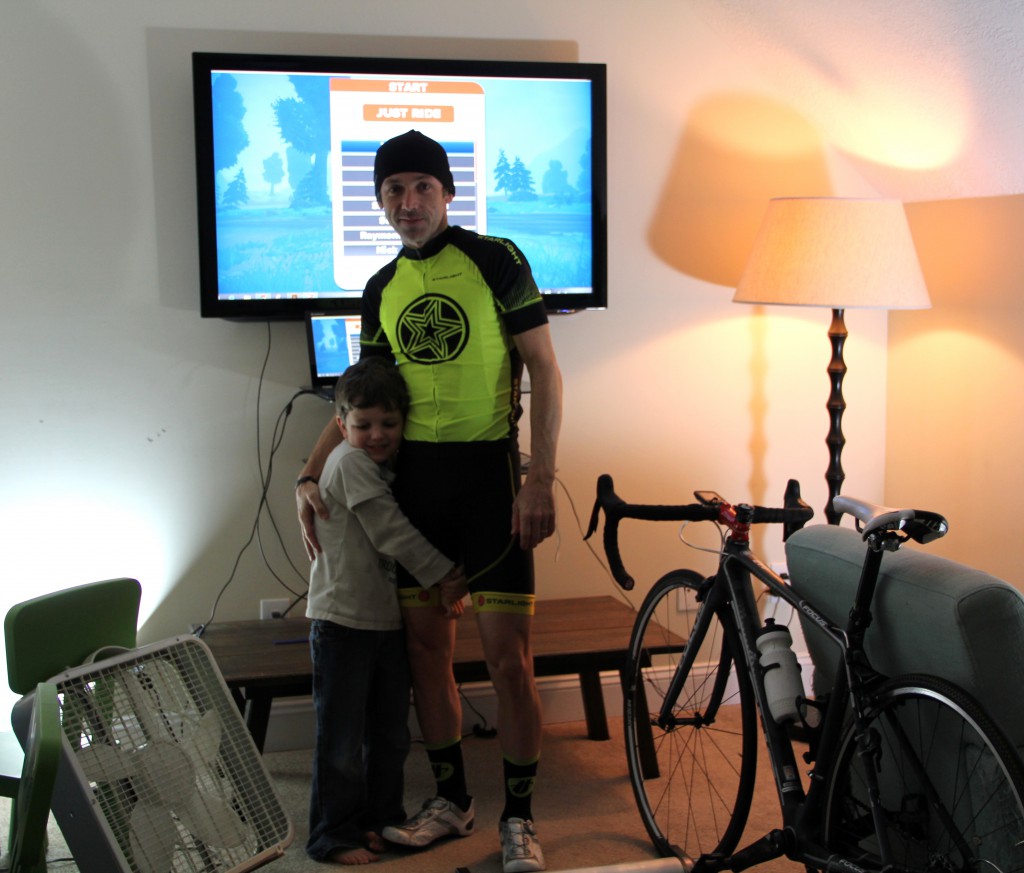 SW: It’s actually the other half of my home office. I have a nice setup that feels great. I have a flat screen TV linked up to my computer and some external speakers. And of course my Tru Trainer rollers, and a fan above me. I also added a box fan to help regulate the temperatures. Using Zwift, I find I’m sweating more and working harder! 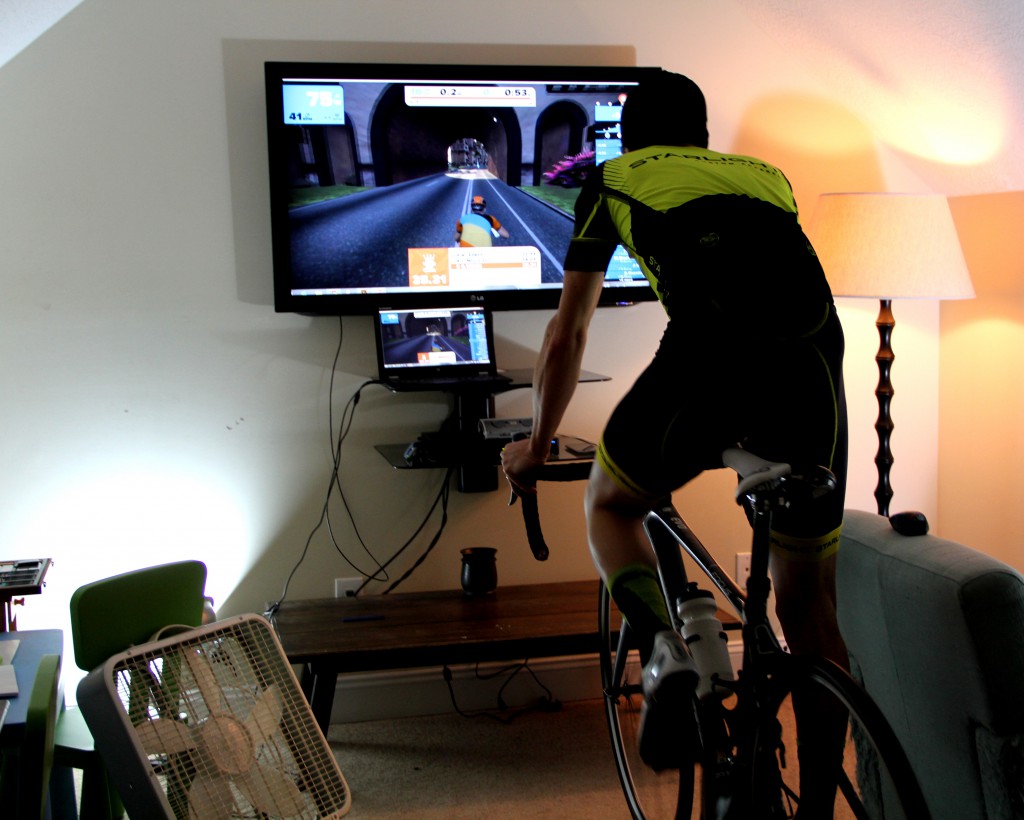 Z: Do you do specific workouts on Zwift or just ride?

SW: I’ve done both. I sometimes go for the sprints or KOM’s as a tester. I’ve even ridden with friends during century rides or while they did interval workouts, so it is very versatile. I see endless options for the platform moving forward as the system grows out of Beta. Seems everyone wants to join in on the fun!

Z: If you could go back in time and race one race all over again which race would it be and what would you differently?

SW: I tried my best over the years in every event I entered, and I feel that the outcome is just that: the outcome. I don’t have any regrets from the past and feel great about every day ahead! I’ve been very fortunate to have the ability, support, and following, so I’m happy with the way the cards fell.

Z: What are your goals for this year?

SW: My top focus and goal will be the Masters World Championships for 2015! This has been TOP on my list for three years, and after coming so close twice (Italy and Slovenia), I want it even more now! Goals along the way include helping my new team (SeaSucker/Guttenplan Coaching) to the best of my ability. The team is really strong and well-organized, and I'll be doing some good crits and road races with David and the guys. Racing with the guys will help me gain the race fitness for my ultimate goal.