A 70-Year-Old Zwifter Feels His Power

﻿Roy Reynolds recently celebrated his 70th birthday, and he seems to have enough lung capacity to blow out dozens upon dozens of candles. Reynolds, who lives in the UK’s North Yorkshire and is emblematic of a notable wave of ambitious, older athletes, is killing it on Zwift.

Reynolds recently pedaled to a peak output of 700 watts (that’s impressive power). He climbed the London course’s Box Hill in just over 9 minutes, which is a competitive time in many Zwift races. His max heart rate still exceeds 165 beats per minute.

“At a ‘certain age,’ I am quite at liberty to take the easy option and ease off,” Reynolds wrote us in an exchange of emails. “But I still wish to improve.”

Reynolds has never won the Tour de France, or La Vuelta. He’s never competed in cycling, or completed long tours. Reynolds has been riding bicycles since his school years, and he and his wife once owned a tandem bike. But then their two dogs came along, and for years the couple mostly walked the dogs a lot in England’s Yorkshire Dales and Lakes District national parks.

“The tandem didn’t fit in anymore,” he writes.

At 50 Reynolds finally retired early from his engineering job at a UK utility, but before 2012 (at age 65) he only rode flat-bar hybrid bikes.

“Tempted to say I dedicated myself to sex, drugs and rock & roll,” he writes. But instead Reynolds chose the path of “leisure and hobbies.” In 2012 he bought himself a road bike, as well as a Tacx Vortex Smart trainer to sometimes escape North England’s mercurial weather. Research around trainers ultimately led Reynolds to learn about Zwift. Reynolds believes that he finally made his way to Watopia in early 2015.

“I’d found indoor-trainer cycling very boring,” he writes. “Zwift was good to look at, and great fun. I took to it immediately.” 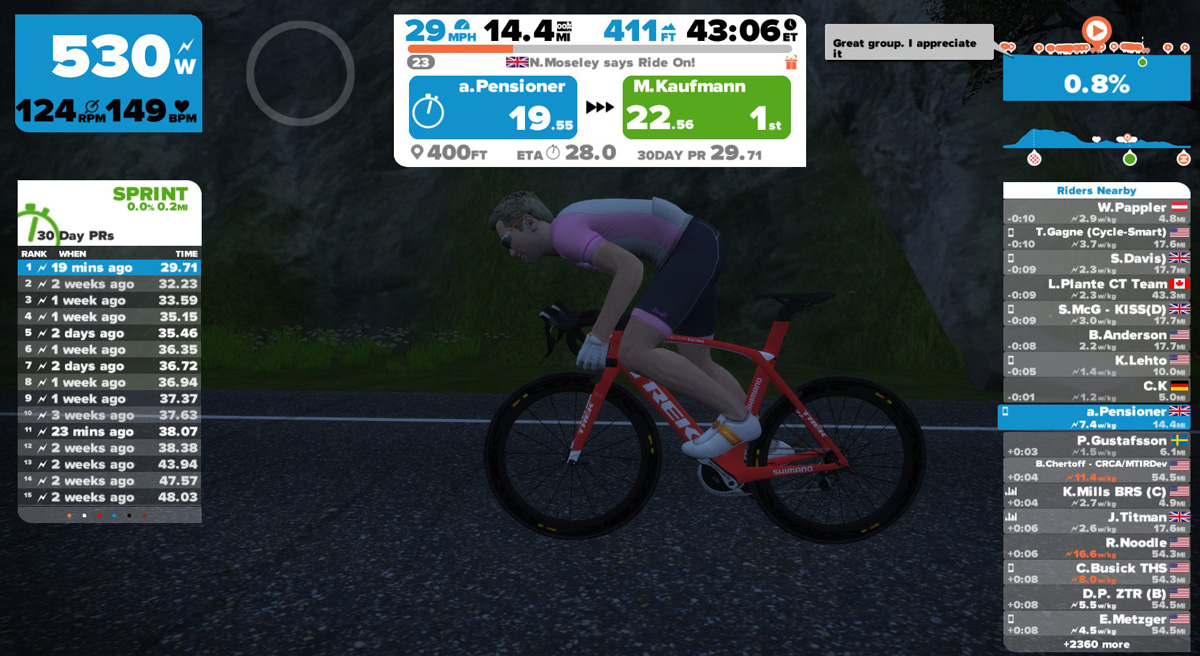 At the humbler end, Canadian Olga Kotelko, who died in 2014 at 95 years of age, held dozens of age-group world records in track and field—many of them set after she had turned 90. Another Canadian, 85-year-old Ed Whitlock, recently ran the Toronto Waterfront Marathon in under four hours. Whitlock also ran a sub-three-hour marathon when he was 73. Neither Kotelko or Whitlock were ever elite athletes. But they’ve both been active for decades, and like many older athletes who have enjoyed some benefits from exercise as far back as the fitness-oriented 1970s and ‘80s, they refused to let their age automatically put them on the bench—or a couch.

“The message with these people is not that they’re freaks,” Dr. Michael Joyner, a researcher and expert on aging and performance at the U.S.-based Mayo Clinic, told The New York Times in a 2016 story about Whitlock. “A whole lot of aging, with a bit of luck, is under some volitional control.”

“I think far too many people give up as they get older,” he writes. “If you adopt an unhealthy lifestyle, possibly gain weight and become unfit you will eventually lose the ability to do many physical tasks that you once took for granted. Zwift is perfect for starting to reverse that trend. You can go at your own speed.”

Reynolds, who Zwifts inside a shed converted into a multi-screened, wood-paneled pain cave, enjoys Zwifting alone, with friends, and in group rides. He’s never had any setup or technological problems (and he now rides on a Tacx Neo Smart trainer). 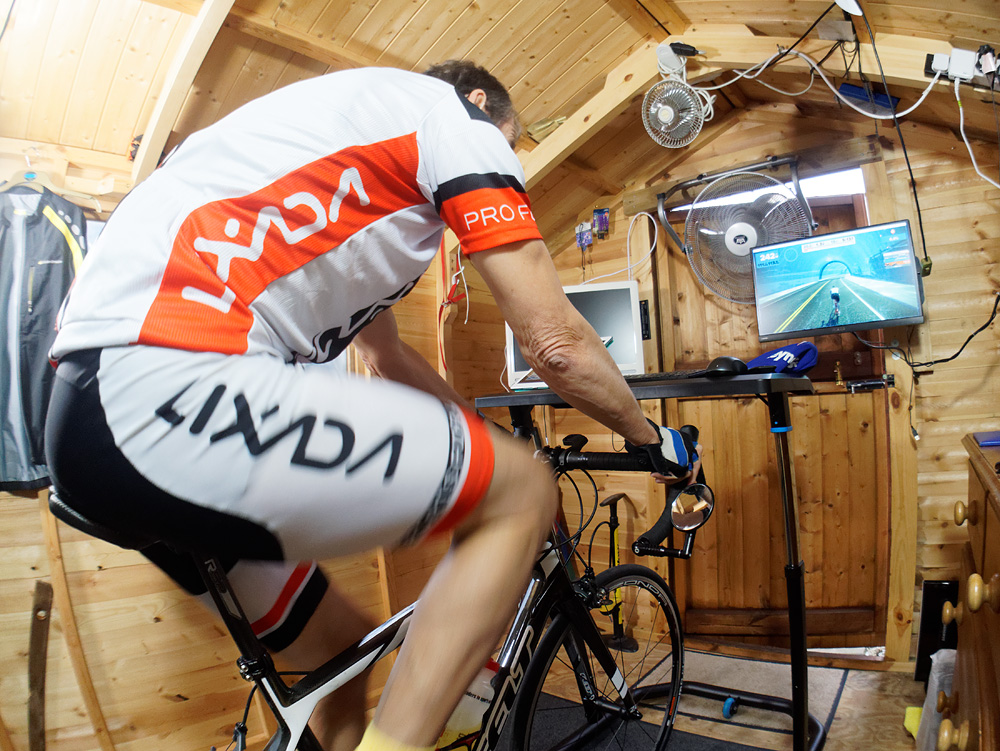 “I would like to see some way of grading riders by age [if a rider chooses such an option],” he says. “I think this would especially help older riders.”

Reynolds himself seems to require little motivation. He recently broke the 700-watt barrier by putting in a heart-pounding effort while ascending out of the London Underground. His impressive power-to-weight ratio of 9.7 watts/kilogram appeared in red.

Among the 82 comments in response to his posting were many assurances that the older Zwift rider had done nothing wrong. Everyone remarked that Reynolds had achieved something great, and that he was a genuine inspiration.

“I want to be like you when I grow up!” wrote Facebooker Rafael Rivera.

Reynolds puts the adulation and achievements in perspective. He’s grateful for every day of Zwifting, and for his good health. 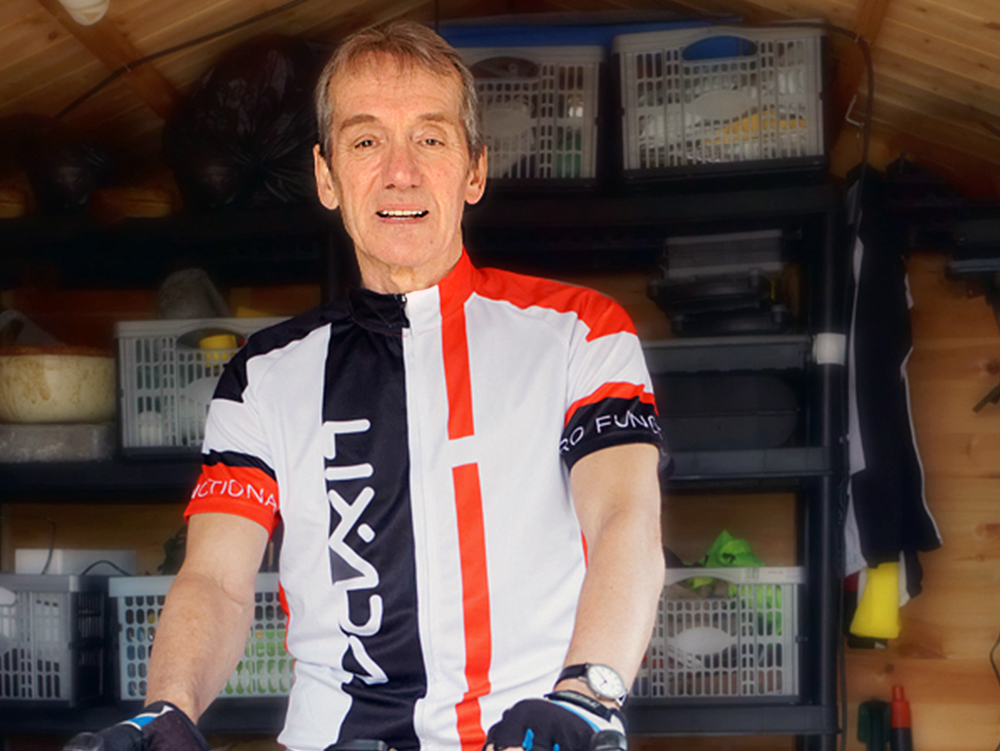 “As I move through my 70s, I realize that decline is inevitable,” he writes. “I want to stay competitive—with myself—as long as possible.”﻿﻿﻿