Round Six had a steady start, but the tension built up to a chaotic bunch sprint for the women of the KISS Super League.

This week’s race was on 5 laps of the London Classique course, which recreates parts of the real-life Prudential RideLondon Classique race. It starts out on rolling terrain before entering a mostly flat 5.4-kilometer loop. Each lap, though, features a 200-meter long climb with an average 5% grade. Whitehall Hill comes about 3 kilometers before the finish line, making it a popular place for attackers to try to spoil the sprinters’ party. 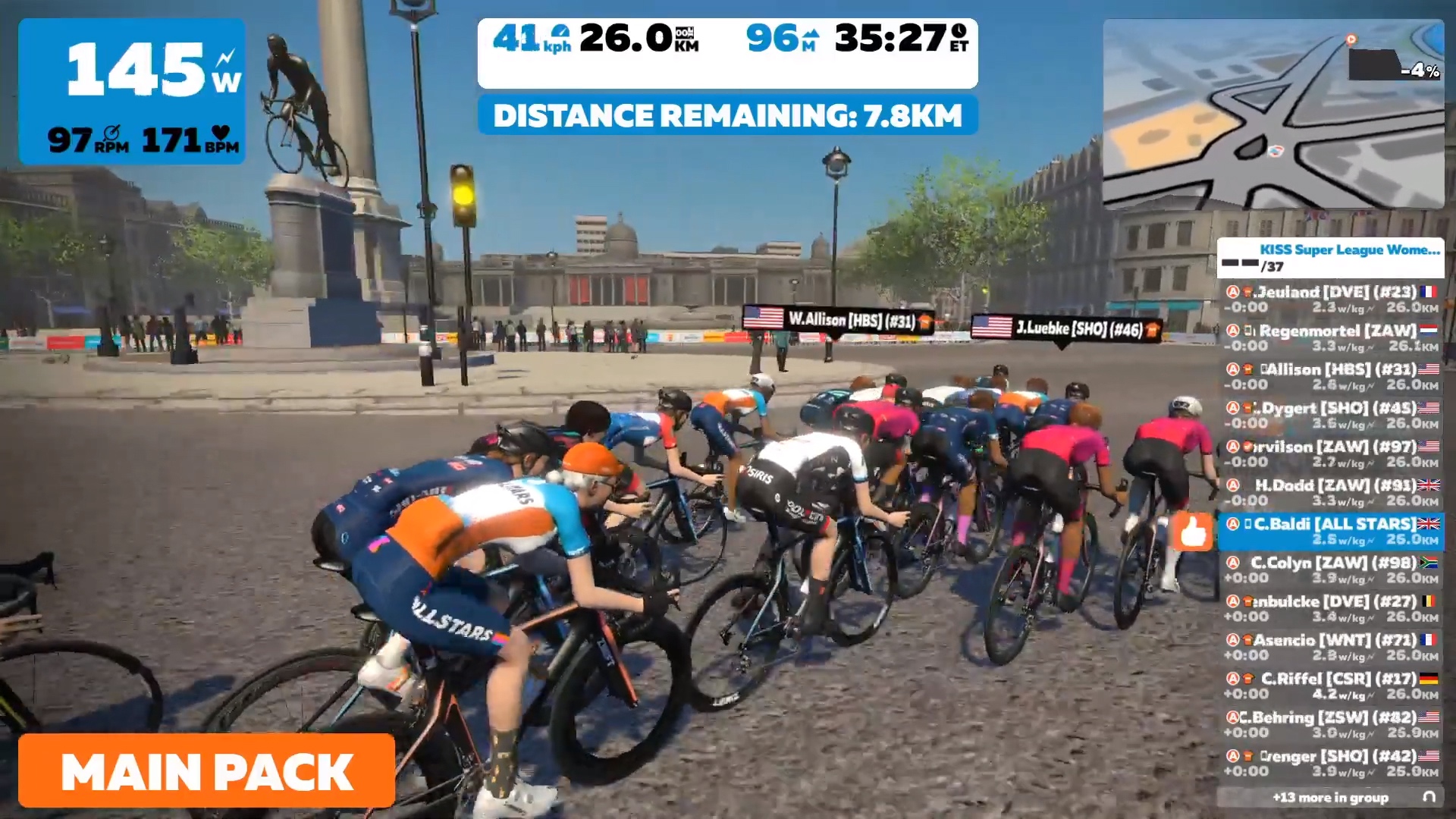 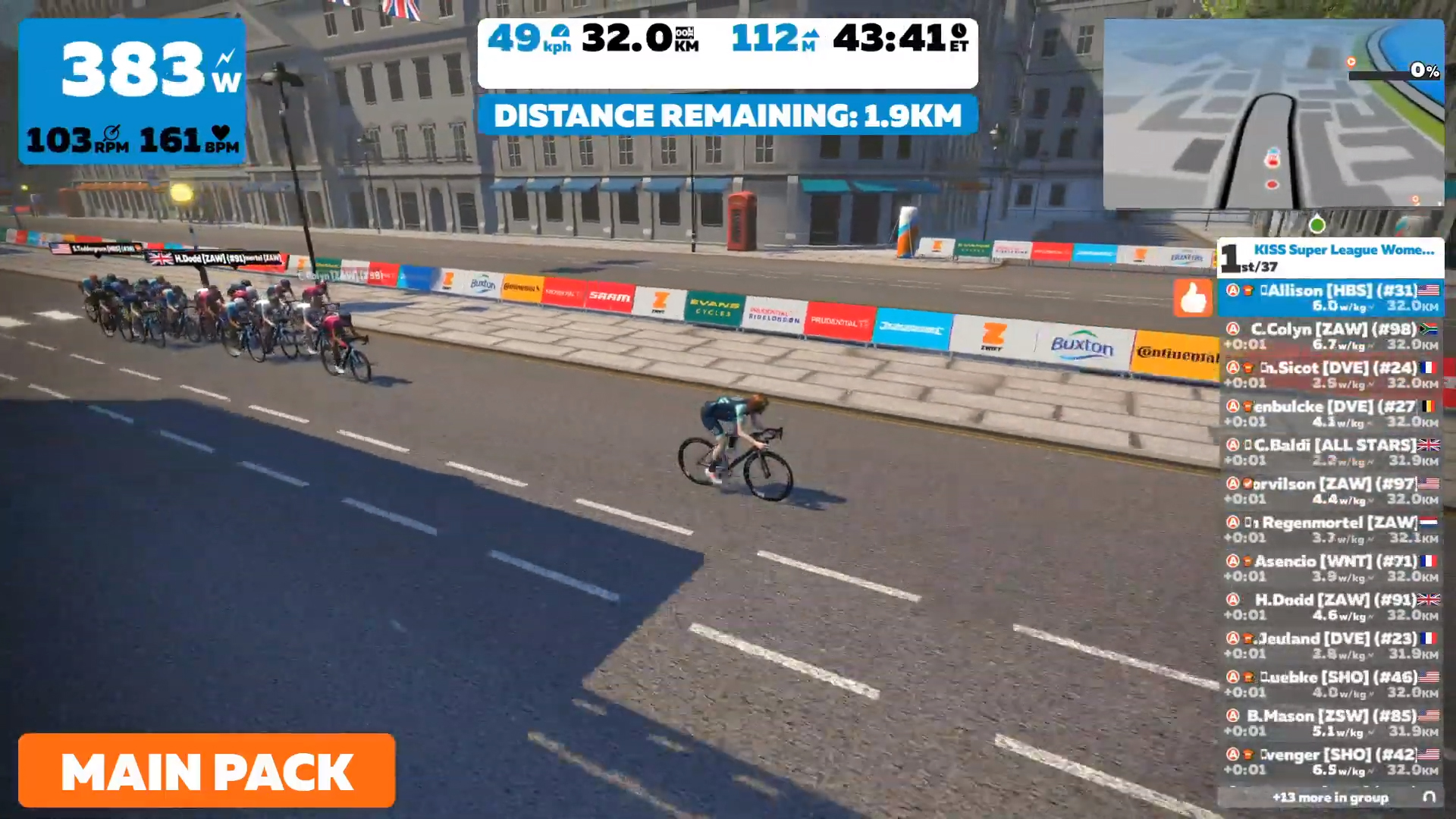 In For A Sprint

The group of about 20 racers took a controlled pace the last time up Whitehall Hill – just high enough to discourage anyone from trying to get away. But once they reached the top and took a breath, Whitney Allison (Hagens Berman-Supermint) attacked! Catherine Colyn (Zwift Academy Dream Team) chased her down, pulling a few more riders with her.

The group started to stretch out behind. Several riders had to use their PowerUps early in order to close the gaps that were forming, leaving them with no help at the finish.

Britt Mason (Zwift All Stars) was one of the first to start her sprint with an aero helmet PowerUp. Erica Clevenger and Chloe Dygert Owen of Sho-Air Twenty20 were hot on her heels. Chasing closely behind were Marion Sicot (Doltcini Van Eyck), Laura van Regenmortel (Zwift Academy Dream Team), and Mason’s teammate Baldi. Claudia Behring (Zwift All Stars) picked her way through the group from the back, earning the fastest time on the finishing sprint segment. But it’s the first racer across the line who takes the win. Mason stayed clear of the others for her second victory in the league! 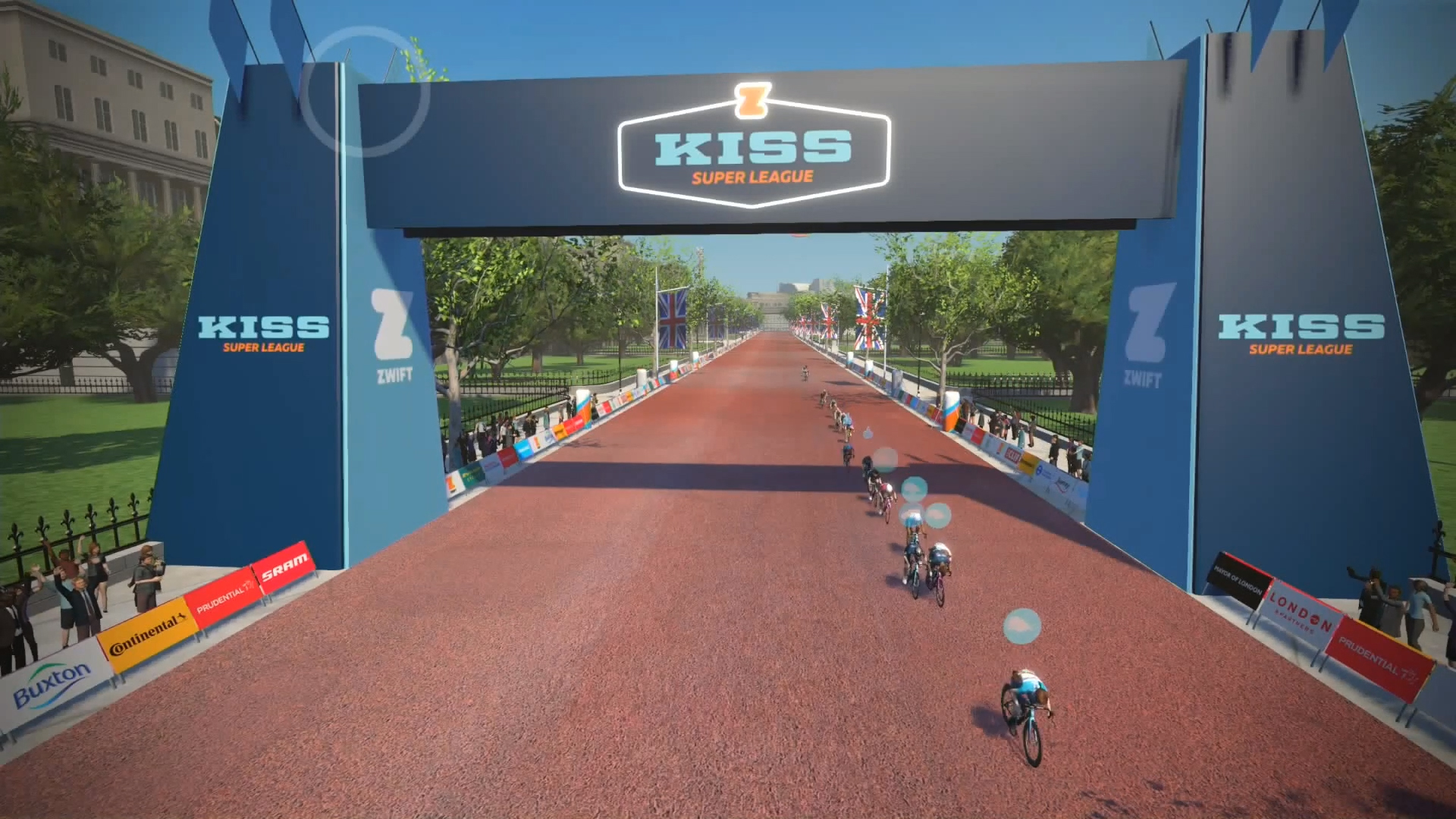 After the race, Britt Mason said she was waiting for the watt-per-kilogram numbers in the Zwift sidebar to light up orange - showing that the others had started their sprints. But the sprint felt like it was starting late.

She said the race went well for the Zwift All Stars, and the pace was more conservative as the riders started to learn how to conserve energy on Zwift.

“I am loving the Super League,” Mason said. “What an opportunity it has been to toe the line with the pros, and I am so honored to be a part of the AllStars, a strong group of women from all over the world.”

Thorvilson said she’s not likely to be going for a sprint in an outdoor race, but she knows how to play her cards just right in Zwift, so she decided to try her hand at it this week.

“I've definitely seen improvement in some of the pro teams who I think are starting to get a feel for the Zwift racing,” Thorvilson said. “I think it's pretty great that they are into it. We all know this is not real life (road racing), it's a different discipline, if you will, and it's fun.”

She said the Zwift Academy Dream Team is enjoying the KISS Super League. She is proud of their performance. They’re in third place in the overall team competition, even though they have sometimes had to field only 2 or 3 riders instead of 4.

“We've done pretty well in all the races where we had a full healthy roster,” Thorvilson said. “We haven't won yet... but don't count us out.”

Next Week – Round Seven

Tune in live! Starting next week, race times will change back to their original schedule in the U.S. due to Daylight Saving Time.

Prudential RideLondon 2019 over 3 years ago