The reverse version of Watopia's Flat route contains no significant climbs, but there are still enough bumps and rollers to put in hard attacks and catch others off guard if you're feeling strong. Along the way enjoy the blazing fast JW Bridge sprint segment, the cobbled Italian Villas, and Ocean Boulevard's underwater tunnels.

What follows is a detailed look at key sections of this route from a racer's perspective. Top A racer Justin Wagner has generously shared some pointers, so get ready for some must-have tips for achieving your best results when racing Watopia Flat Reverse.

Justin introduces the route: "Although Watopia Flat Reverse is a flat course (shocker, I know), there are some key spots where if you aren’t paying attention, you can be caught out and left behind. Or, if you are an astute racer, you can use those spots to put your opponents in a spot of bother." 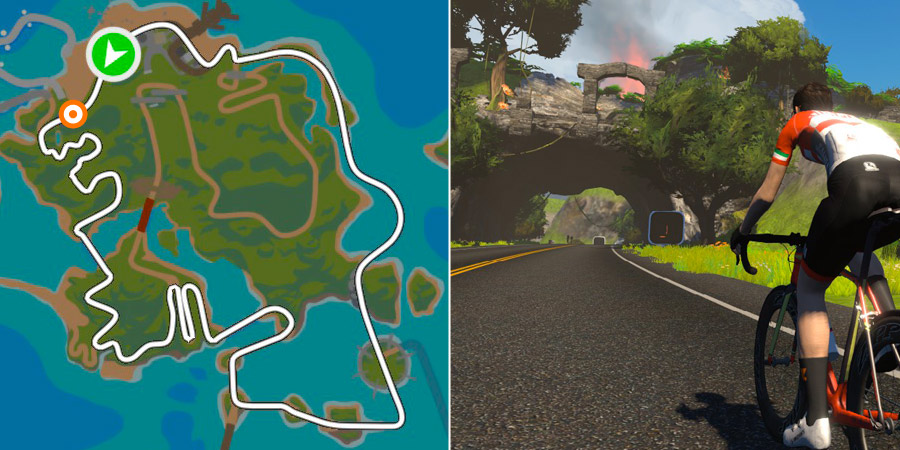 This will typically be a fast start as strong riders look to break up the pack and make a selection early. You'll want to go into the starting pens fully warmed up!

The route begins with a short uphill into the Esses, so be ready to ramp up your power quickly to keep pace with the pack.

#2: The Esses in Reverse 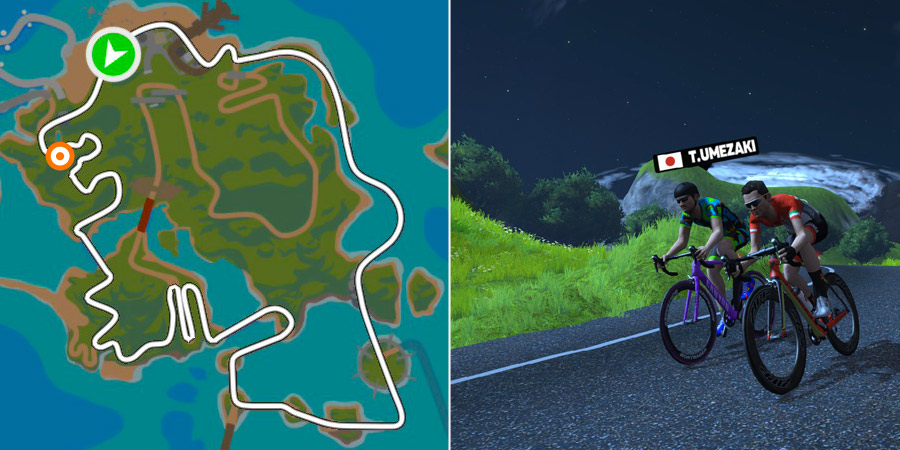 Vigilance is important through the twisty, rolling Esses section. Justin warns, "The race almost certainly won’t be won by moves made in this section, but you can absolutely get dropped and lose the race if you aren’t careful here. Pay attention to the momentum that your avatar has as you crest the rolling hills, then recover as you fly down the descents. But don’t wait too long before you put the pressure on the pedals, otherwise you’ll quickly find yourself off the back and in no man’s land." 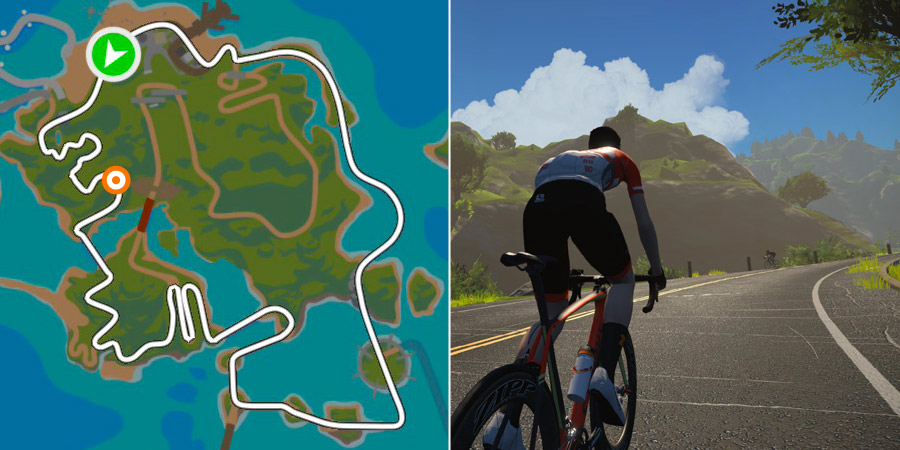 It may surprise you to learn this is actually the biggest climb on Watopia Flat. This one is all about momentum--time it right and it'll be over quickly. Keep your speed up on the downhill coming into the climb, then ramp up the power to maintain speed up and over. Don't ease up until you're flying downhill and well-positioned in the group! 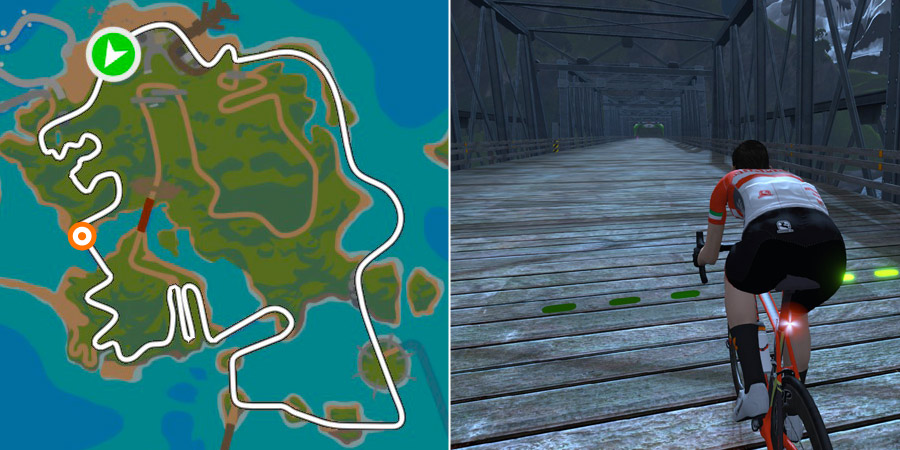 If your race is tracking sprint points you'll want to ramp up the power on the straight downhill heading into the left-hand turn to the bridge. This is a very short sprint, so hit the start at full speed and keep your power up until the banner at the end of the bridge.

Not going for sprint points? Riders will likely roll through this section. Stay vigilant and recover for the short climb out of the Italian Villas. 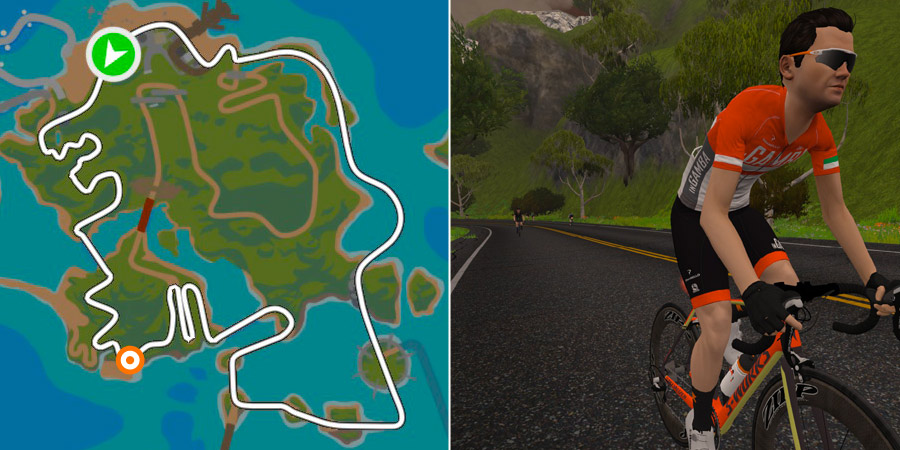 Riders who are already on the rivet may get dropped on this little bump as stronger riders attack. If you're struggling, try to position yourself near the front of the group heading out of the Italian Villas so you can surf the wheels, staying in the draft as you slowly drift back through this section. Use your feather powerup if needed.

Feeling strong and daring on your final lap? Justin says, "If you are extremely confident that you are heads and shoulders better than your competitors you may use this to launch an extremely early breakaway attempt for the win, but most likely you’ll just want to make sure you don’t get caught resting and get gapped."

#6: Rise Out of Ocean Tunnel 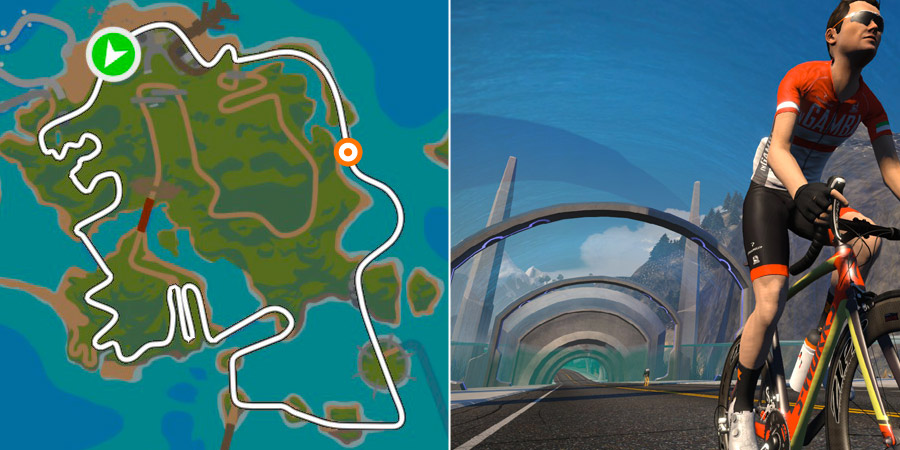 This ramp out of the tunnel will always be attacked, most of all on the final lap. Some riders may attempt a long break beginning here, but those attacks are usually brought back.

It pays to know the course in this final stretch. Justin gives us the tour: "About 1.5km from the finish you’ll begin a climb to get out of the Ocean Tunnel and up onto 'dry land.' It’ll flatten out a bit before another gradual rise at 900m to go. Then once you’ve made the right hand turn to get off of Ocean Boulevard you’ll be on completely flat land until the finish."

This final 1.5km is where you really want to play your cards right, as this is almost certainly where the winning move will be made. 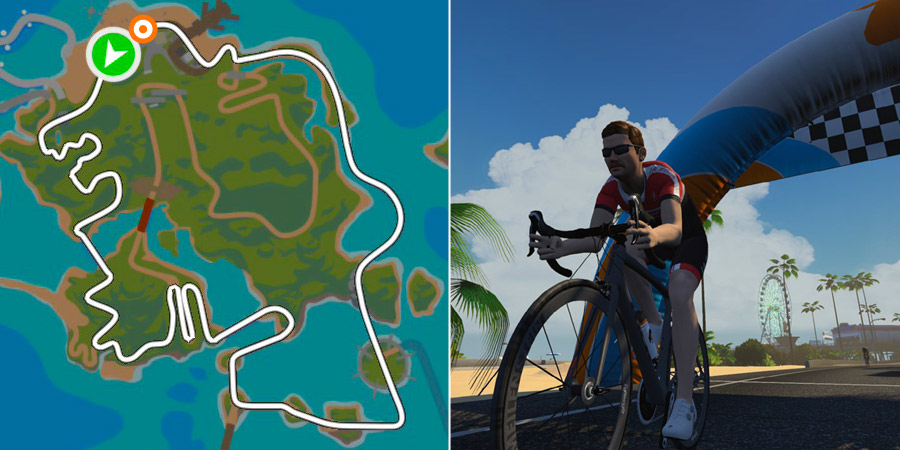 Since this is a flat route, the final podium will almost certainly be decided with an all-out pack sprint. Use your aero helmet powerup, time it just right and you may come out with the win.

If you're riding with a team, Justin shares one strategy which can be used to give the win to a teammate who isn't the strongest sprinter. He calls it the "Multi-man Leadout Approach".

I offer for your benefit one strategy to use in the final 1.5km section that would work quite well if your goal was to help a teammate that may not be the best sprinter in the bunch, but can suffer like the best of them for about 2 minutes. Here is what to do. When the pack surges on the climb coming out of Ocean Boulevard, you’ll want to surge with them, but not too hard, just hard enough so that you stay in the sweet spot of the draft, and still have some in the tank.

As soon as the pack lets off the gas when it flattens at the top, this is when you make your team move. You’ll need one or more guys as your lead-outs, and the “protected” rider as well. All of these guys will need to surge HARD as soon as the others back off, with the protected rider surging just enough to catch the back end of their draft. You’ll need to make sure that you’ve created a gap so that the pack behind you isn’t benefiting from your draft. If you don’t get a gap, abort this move and resort to a strategy for a final sprint.

Assuming you do get a gap, you’ll want your lead-out team to absolutely demolish themselves while they have the protected rider in their draft. Ideally, they’ll run out of steam at about 500 meters to go, and then the protected rider can leapfrog them with his final kick. If you played your cards right, meaning you got a gap at the beginning, and your lead-out team was strong enough to continue opening up the gap, then your protected rider will be in perfect position to place as high as possible, despite him not having the best sprint.

We hope you've enjoyed this Race Recon. The goal of this series is to explain the features that make each Zwift route uniquely challenging for racers. Previously we looked at the Volcano Circuit CCW. Be sure to read that post for more tips!

Racer to Racer: Claudia Behring over 3 years ago