Alan Dempsey had a dream to help junior cyclists.

He didn’t think that when it came true, it would look quite like this.

Dempsey is a youth development racing coach with Ottawa Bicycle Club. Every Monday, Wednesday, and Friday, the young cyclists he coaches log on to Zwift and ride as a team in a Meetup.

For the time being, they can’t train as a group on the road. Their coach can’t see them in person. But Dempsey is there virtually, riding along and giving them instructions and advice on Zwift. He’s able to personalize it to each rider because he can see their data in real-time – something that would be impossible outdoors.

“It provides me with an opportunity to not only lead workouts but also teach,” he says. “From a coaching perspective, this makes training rides more valuable than if I were to send them off on their own.”

Dempsey also coaches adult Ironman athletes through his coaching service, Human Power Performance. He was just getting started coaching junior triathletes and elite draft legal triathletes when the COVID-19 pandemic brought everything to a halt.

So Dempsey turned to Zwift. He started holding Meetups for the Ironman athletes to finish out their Sunday endurance program.

“The success of those rides led me to encourage my juniors to get on Zwift,” Dempsey says. “I put out a call to the Ottawa Bicycle Club membership to see if anyone had spare trainers or power meters. Now almost the entire youth racing program is on Zwift.”

Here’s how Dempsey uses Meetups to keep his athletes training together:

Learn more about how to use Meetups

When Dempsey received his first paycheck in his first job out of high school, he bought a road bike. He wanted to race bikes full-time, so he joined a local cycling club. But he soon realized that pursuing that goal would be too expensive with student loans and a part-time job.

Instead, he started running, and he competed in a few triathlon races. A move to London, Ontario for graduate school brought him to the Forest City Velodrome, which helped him enter the world of competitive cycling. He wasn’t doing it for a living, but he continued racing his bike for a few years.

Dempsey returned to Ottawa, Canada, after graduate school and founded Human Power Performance, a coaching service and club for cyclists, triathletes, and runners. Three years later, in 2018, he focused his personal training on triathlon and began competing professionally. 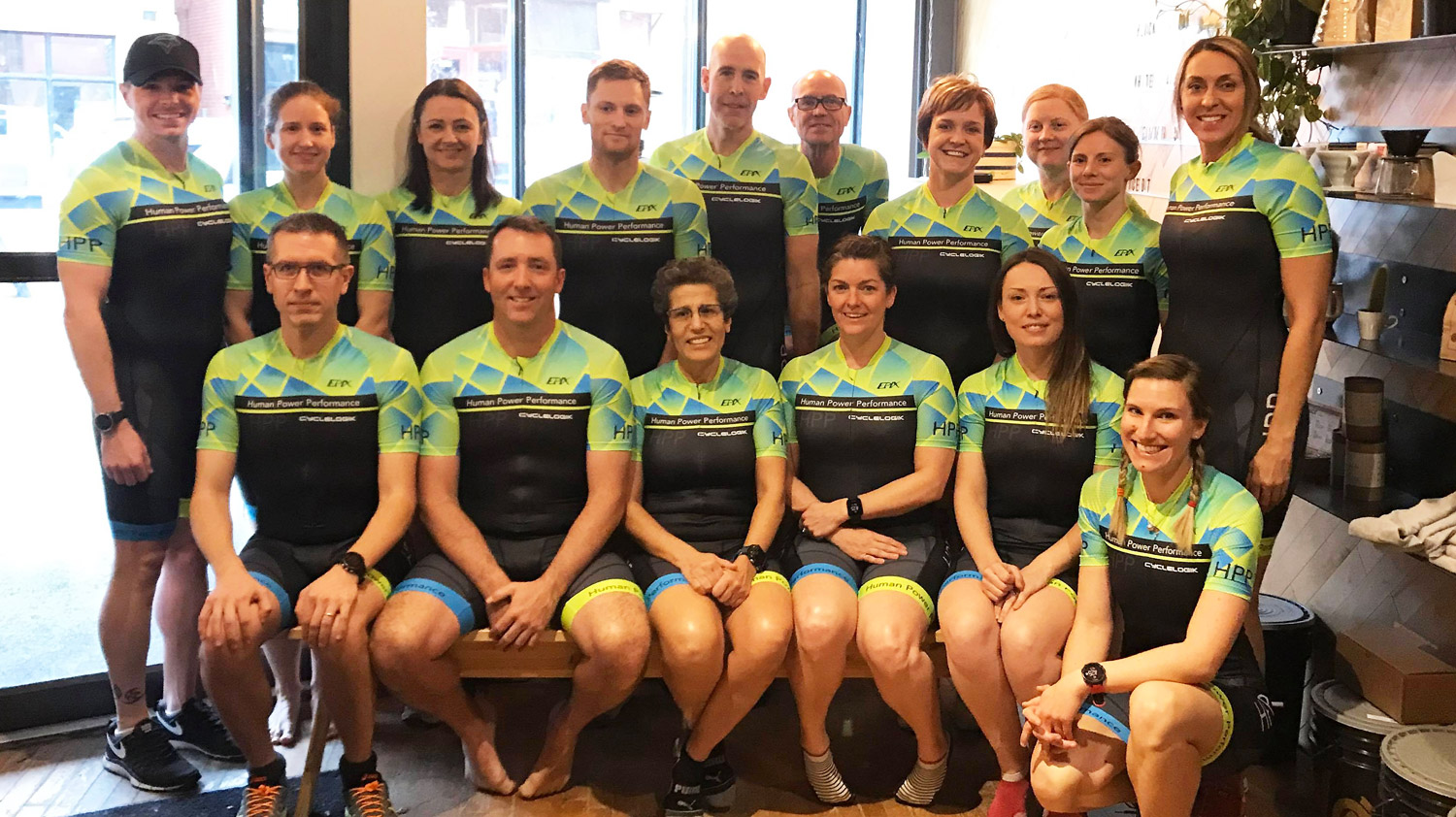 Alan and his HPP squad

“It was my dream to start a junior development cycling team,” Dempsey says. “But after moving into triathlon and building a name for myself as a triathlon coach and triathlete, I thought that dream had died.”

Then, he met a board member from the Ottawa Bicycle Club (OBC), who led him to interview for his position there. Now, he coaches junior cyclists along with adult and junior triathletes.

Dempsey first found Zwift in early 2015, but it wasn’t until 2017 that he started relying on it for all of his indoor training. He had prescribed athletes structured workouts on Zwift before, but this year he’s using it a lot more.

Making the Most of Meetups

Dempsey notes that Meetups have some limitations compared to other events. As of April 2020, organizers need to manually invite Zwifters who follow them. Riders can’t join Meetups late or rejoin. But he has some tips to help organizers make good use of this feature: 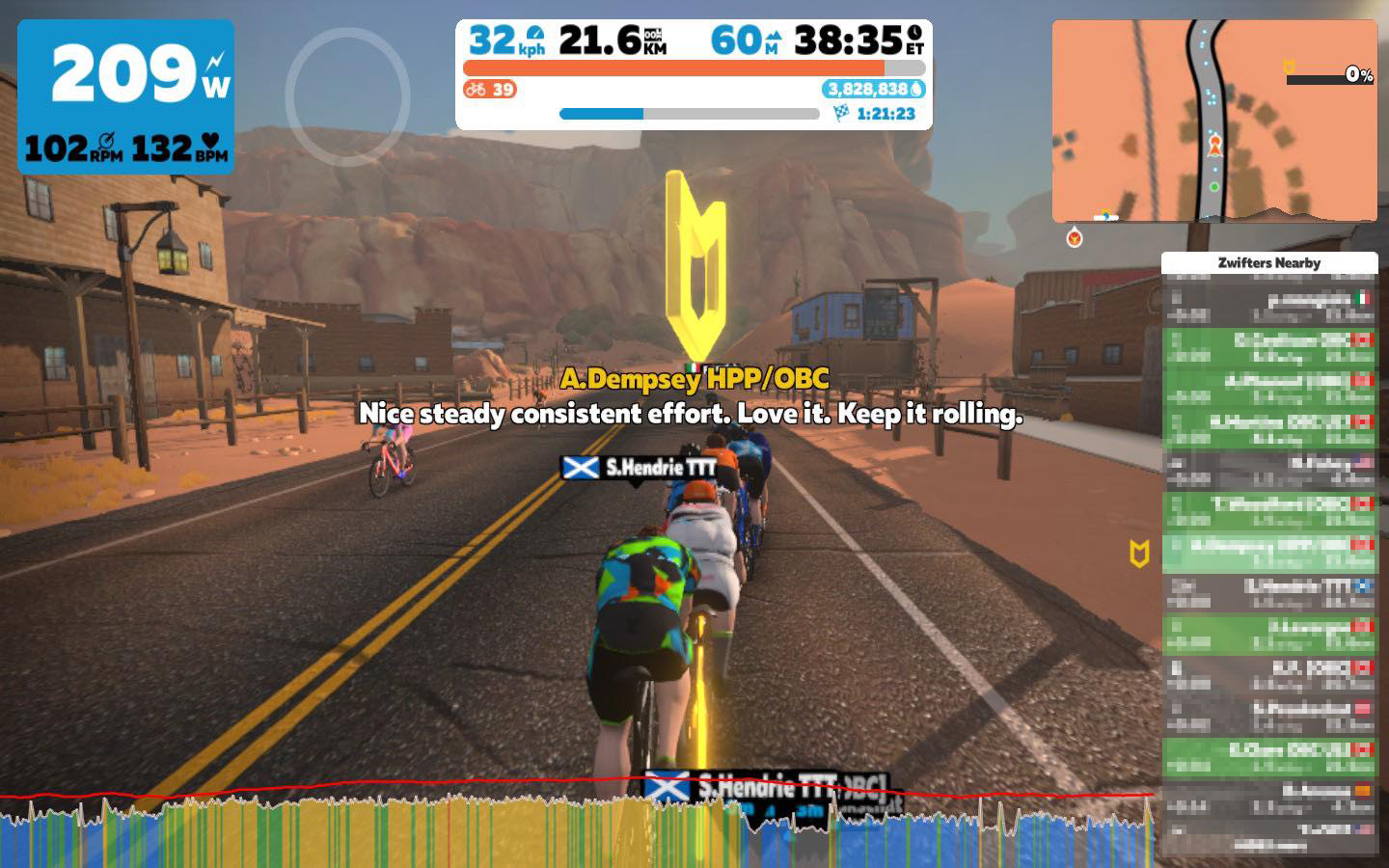 In some of their workouts, the junior riders are split into two teams that take turns working and recovering.

“Seeing the juniors encourage each other when the going gets tough is amazing,” Dempsey says. “And the same for the long rides with my triathletes… It warms my grumpy cold heart a little.”

Cooperation and camaraderie are important for teammates. But sometimes athletes just want to compete. The juniors race in a time trial tournament that’s also held through Meetups. “Keep Everyone Together” is not selected here! These races against the clock are live-streamed to a club Facebook group, so parents and other club members can watch and cheer.

The triathletes Dempsey coaches have used Zwift to compete in Ironman and Sportstats virtual duathlons, which combine indoor cycling and running. These are live-streamed publicly, so people can see that good things are still happening in the world of sports.

Dempsey says it was important for him for his athletes not only to continue their training, but to do it together.

“As an athlete who struggles with depression and anxiety, if I had to isolate like this 5 years ago without a social training tool, I would have to contend with both the threat of a virus and mental illness,” he says. “Zwift has been an important tool in my mental health toolbox through this crisis. Not just because I can ride a bike, but also because I can provide value for others as a coach, which is incredibly rewarding. I have a reason to get out of bed every morning and Zwift is an integral part of that reason.”