The group has strong sweep support and friendly banter for the full hour. Whether you pursue the red beacon of the Lanterne Rouge is up to you!

“We developed Poursuite de la Lanterne Rouge to offer riders comfortable on social-paced D rides an opportunity to try something a bit faster, while giving stronger riders a chance to test themselves with a friendly chase of our ‘Lanterne Rouge’ during the last 15 minutes,” says ride leader Steve Whitcombe. “We pride ourselves on holding the group together without a fence through a combination of strong sweep support and friendly persuasion.” 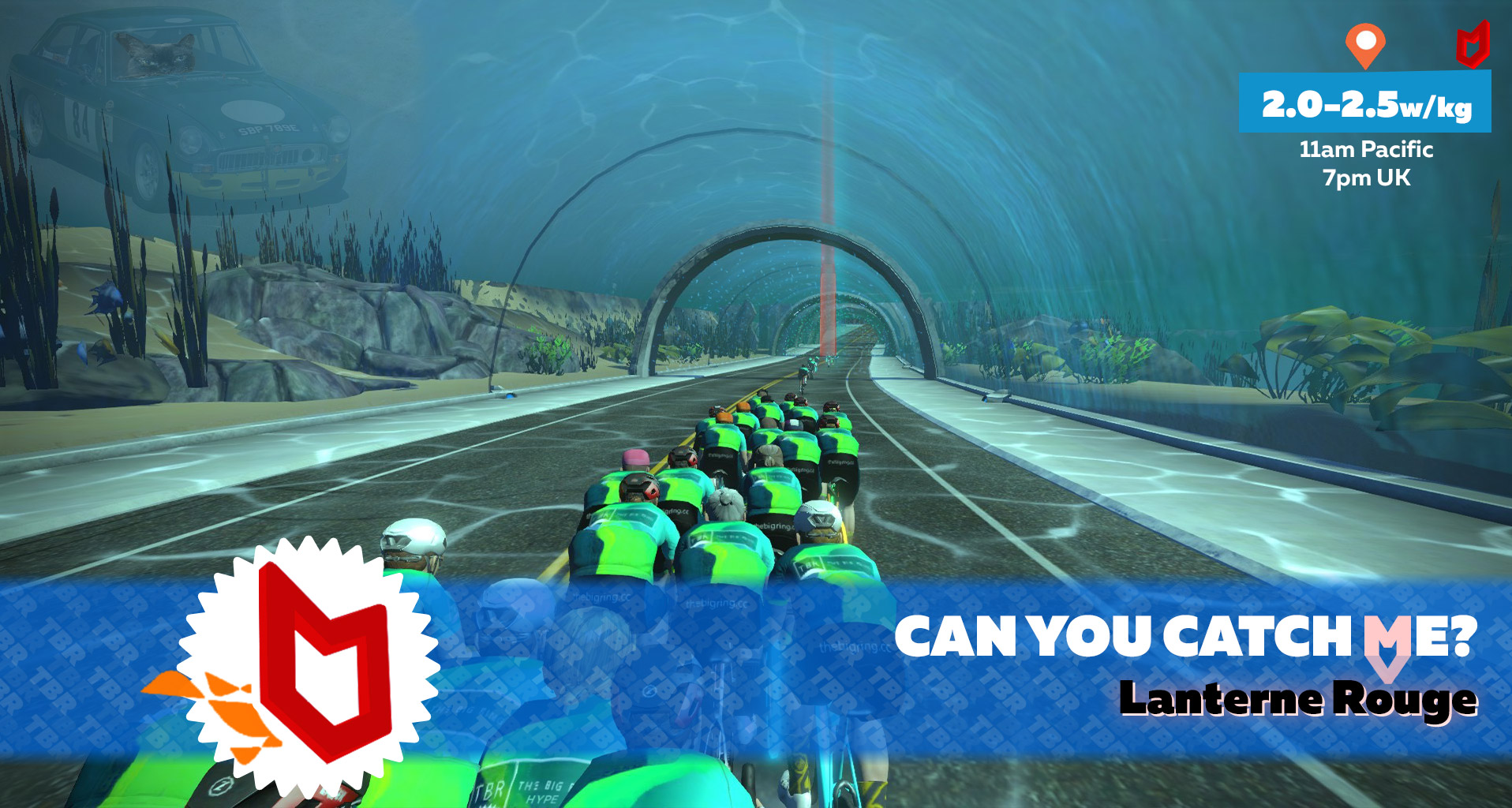 Poursuite de la Lanterne Rouge starts out as a steady group ride. For 45 minutes, the ride cruises at an average of 2.3 w/kg, for a speed of ~23 mph (38 kph). They pride themselves on always sticking to the advertised pace.

The rest of the riders then try their best to chase down the red beacon before the ride ends. At first, they did this all together, but now riders can choose one of four groups. The slower “White Jersey” group waits one minute to start chasing, the “Green Jersey” group waits two, and the faster “Maillot Jaune” (Yellow Jersey) group waits three minutes. Finally, those who aren’t up for a chase can just stick with the leader’s yellow beacon for a steady ride. There’s a little something for everyone!

“We designed this ride as a step up from social-paced rides to encourage those comfortable in D events to try something a bit faster with lots of sweep support,” says Holly Brown-Williams, a backup leader. “We have been very successful in moving riders comfortable at a high D pace into a C event, with the help of a very strong group of sweepers. At the same time, we’ve created an opportunity for C, B, and even A riders to challenge themselves in a fun environment by chasing our Red Beacon (the Lanterne Rouge, Gary Collinson).”

In addition to the Lanterne Rouge, there is a regular crew of 6-8 experienced sweepers. They work hard to keep riders in the group and bring them back if they’re struggling. 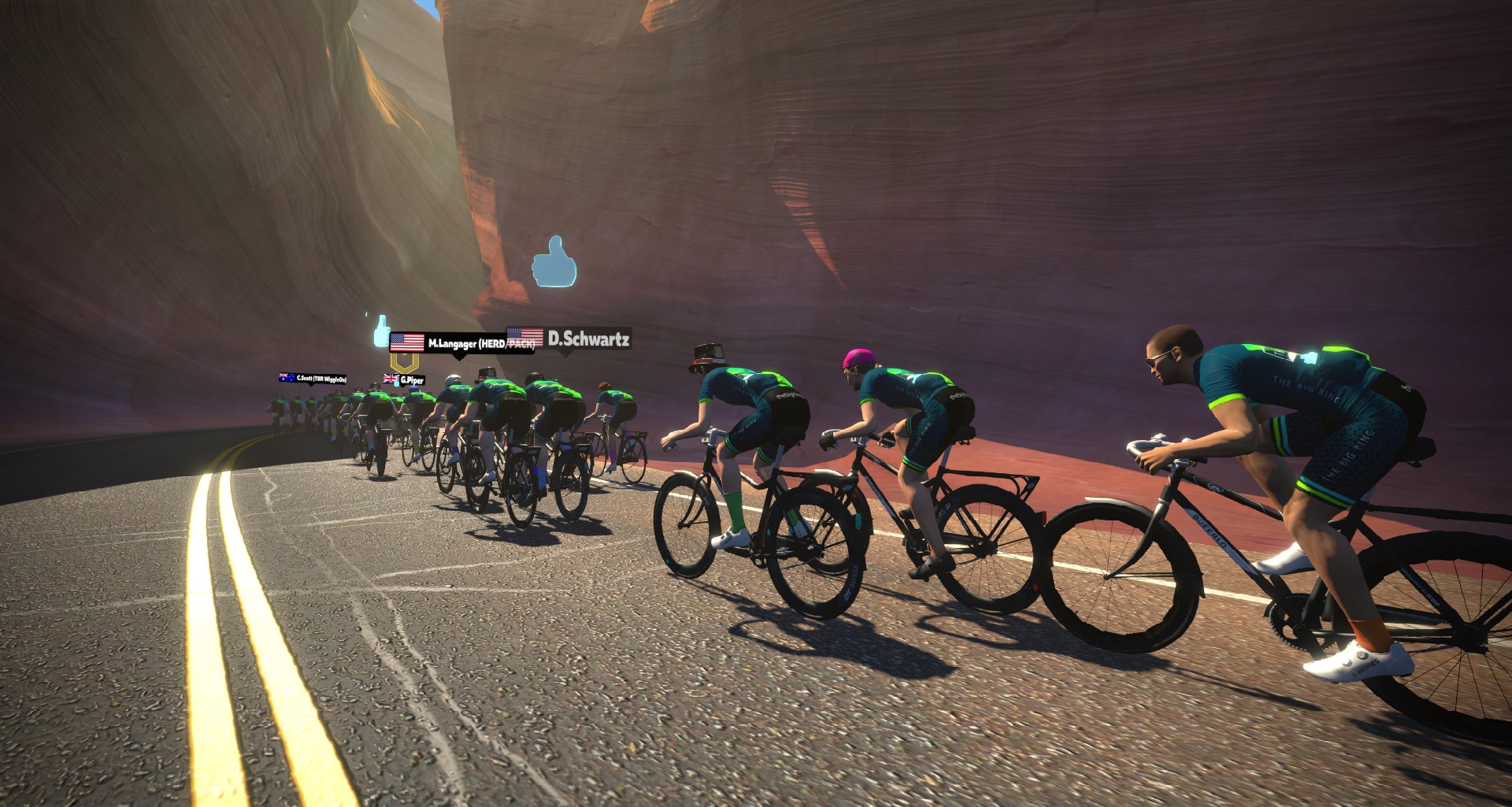 The ride is usually held on the Magnificent 8 route in Watopia. The event-only course offers a lot of variety while making it relatively easy to hold a large group together without using the group ride fence. Plus, it provides the most effective launching point for the Lanterne Rouge!

“One thing we are most proud of is the large number of riders who gained so much confidence and strength through the chase, they are now catching the Lanterne Rouge, and several have joined TBR’s racing team,” Holly says. “Many riders credit this event with improving their speed, stamina, and overall racing skills.”

They also get the chance to win a special prize! On the first ride of each month, Steve randomly draws a name from those who give him a Ride On during the event. He sends the winners polo shirts that are embroidered with the TBR and Lanterne Rouge logos, as well as water bottles and stickers with the club logo.

According to backup leader Holly Brown-Williams:

“Poursuite de la Lanterne Rouge is the brainchild of Steve Whitcombe and was launched in early 2020. The Big Ring (TBR), a global Zwift club of more than 3,000, was interested in creating more events in time zones convenient for Zwifters in the USA and Europe, and invited us to start this ride under TBR. The event was consistent with their experience hosting handicap races and other fun challenges. It was quickly embraced by riders around the world, and it attracts many from the southern hemisphere as well.

Jonathon Levie designed our event graphic. He based it on a screenshot taken while on the event with us. There is a funny hidden image in the graphic, and it takes an astute observer to spot it!”

Steve Whitcombe (known by many Zwifters as “Silent Sweep”) is the regular ride leader, with Holly Brown-Williams and Charlie Lindsay as backup leaders. Steve is 54 and has been active on Zwift since 2015. He served as a sweeper for several events over four years before joining TBR in 2019 and launching Lanterne Rouge.

Steve is also co-leader of TBR’s newer “Happy Hour” event on Wednesdays at 10:45am PT/6:45pm UK. Hosted by TBR for the Knights of Suburbia, Happy Hour is a well-supported C-paced ride with friendly chat that includes a focus on mental wellbeing while enjoying rides inside and out, the mission of KoS.

Learn More about The Big Ring

For more about The Big Ring, Poursuite de la Lanterne Rouge, and its other rides, go to www.thebigring.cc. This will lead to its Facebook group, which is open to all. TBR also hosts the TBR Racing race team.

Zwift How-To: Ride With a FutureWorks Pace Partner about 1 year ago