If you’re a cyclist looking to get into multi-sport races like triathlons, run a 10k, or just get in some cross-training, Zwift has a plan for you.

The “Cyclist to 10k” intermediate-level run plan is 8 weeks long, with 4 workouts per week. You can shorten it to 6 weeks if you have less time. You’ll run an average of 16 miles (26 kilometers) per week, starting lower and gradually building higher.

Dan Rose Aponik, an experienced Zwifter and cyclist, gave this plan a spin and smashed his personal records!

This wasn’t Aponik’s first try at running. About four years ago, he did a 12-week block of run training leading up to a half marathon. But after that race was done, he just went back to cycling. He came back to running in late 2020.

“I wanted to take a break from intensive cycling training and try something new, while maintaining the good base of fitness I had built up over the year,” he says. “I saw that Zwift had released this new Cyclist to 10k Training Plan in a recent update, so I thought the timing would be good to give it a try.”

After completing the plan, he smashed his best 5-kilometer, 10-kilometer, and half-marathon times. Wondering if it’s for you? Read on!

Use your training know-how and raise your running game. This plan serves up base runs along with hill and interval work to sharpen you up where it counts.

With a focus on running regularly and using hills to build strength without excessive speed, this plan steadily and predictably builds your volume. Meant to be done at any point in the year, this plan starts with a low volume requirement and steadily builds over the 6-8 weeks before peaking and culminating in a 10k run.

This plan will push you, but also remind you that it’s important to take time off and to run easy – really easy – as part of the process of getting better. 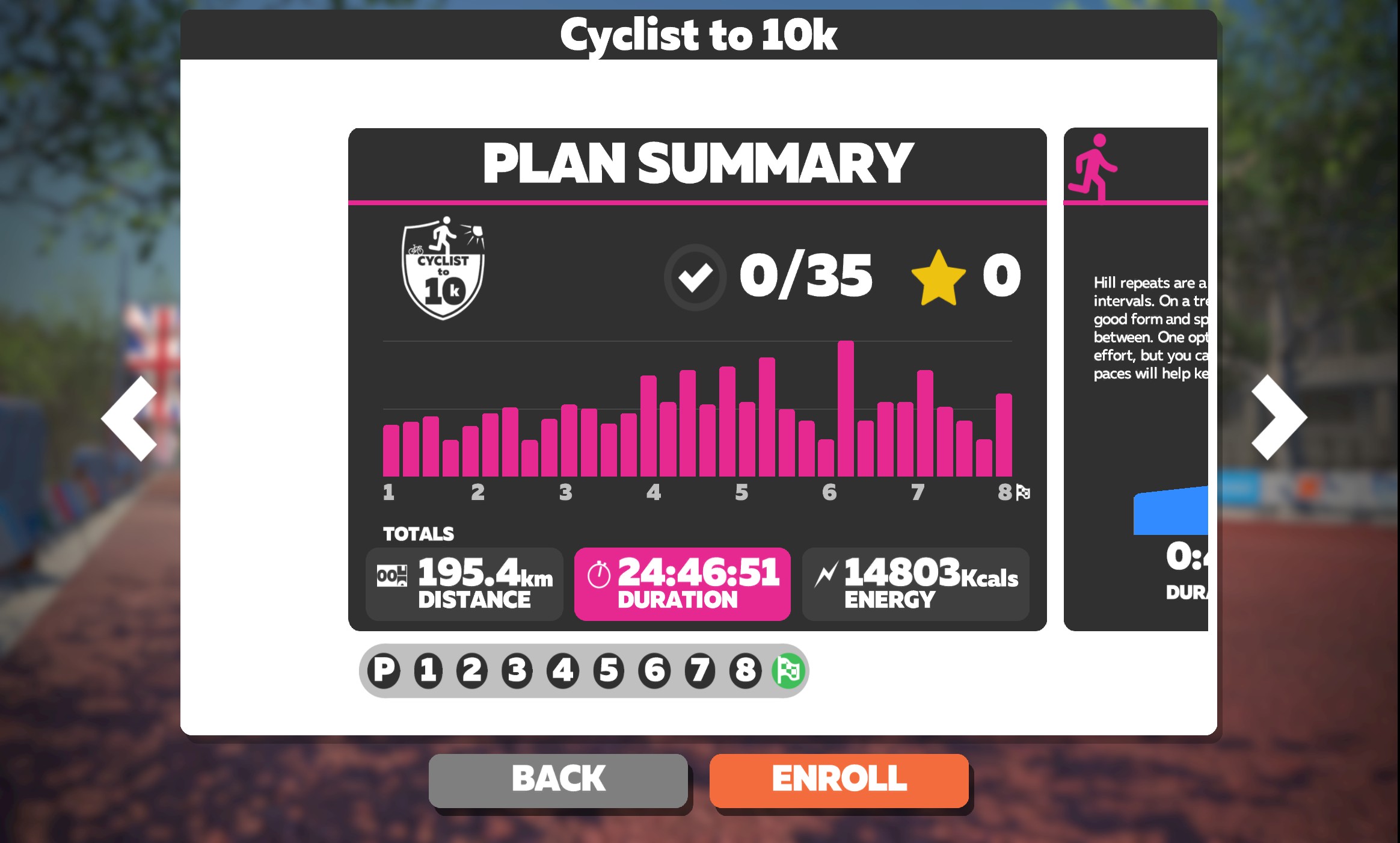 Clip Out, Lace Up

“I’ve really liked the plan and the workouts have had some nice variety,” says Aponik. “My favorite workout was the ‘Long Fartlek’ or ‘Short and Sharp.’ Speed workouts are always fun. There really were no ‘least’ favorite workouts, because after the speed workouts, you find yourself looking forward to the ‘Easy’ and the ‘Tempo’ steady-state runs.”

Aponik says he would definitely recommend the Cyclist to 10k training plan to someone looking to do a 5k or 10k race. If you’re not working toward a race right away, you’ll find a race simulation workout at the end of the program that will let you test your fitness. That’s the workout where Aponik set new personal records over 5 and 10 kilometers.

“The training program sets you up nicely to be ‘race ready’ for that day with some lower mileage in the days before the ‘race,’” Aponik says. “After 8 weeks on the treadmill, I had a really nice gauge of what tempo I could sustain, both for pace and for HR. So I held high tempo for the first 5k and then increased the pace in the final 5k to finish strong.”

The plan assumes you’re a cyclist who understands the principles of training and workouts, but it doesn’t expect you to have any real foundation as a runner. Aponik still recommends that you get some short runs under your belt first.

“My only suggestion would be to build up a little bit of a run base for a couple of weeks before starting the plan, if you have the time,” he says. “To avoid injury, doing some short runs of 1 or 2 miles a couple of times a week to get those running muscles primed would be a good idea.”

If you’re a beginner, Zwift’s two-week Running 101 plan is the perfect intro to get you up to speed.

Aponik has been mountain biking since 2012 and road cycling since 2013. He started training consistently in 2015, leading to a second-place finish in the Tour of Guam in 2018! As the highest placed local rider, Aponik was awarded the Guam National Road Race Championship title.

In late 2019, he signed on with Team Equipe CMI, a pro continental team that had just registered on Guam and was looking for some local talent. One month later, he successfully defended his national title, this time with the help of his Equipe CMI teammates.

He says he owes a thank-you to his wife Rose and daughter Chelsey for supporting him in his racing and training. Going into 2020, he was looking forward to another great year on the bike.

Then the COVID-19 pandemic hit, outdoor bike races pulled the brakes, and Aponik shifted his training to about 80% indoors.

Aponik decided to try the Cyclist to 10k training plan after completing both Zwift Academy Road and Zwift Academy Tri late last year. He has run two indoor half marathons since ending the plan and set a new personal record each time, using what he learned from the training plan to help him with pacing. He also jumped into the WTRL Zwift Duathlon League to challenge himself in both cycling and running.

“It has been tough to stay motivated with no ‘real’ races on the schedule in 2020 and nothing yet confirmed for 2021,” he says. “Fortunately, Zwift has been keeping me fit with several challenges.”

Ready to move from the trainer to the treadmill and go after some records of your own? Log on to Zwift and enroll in the Cyclist to 10k training plan!

Meet the Pride On Ride Leaders 7 days ago