Whether they’re riding bikes with their kids or sneaking in a run at naptime, Zwift mothers find ways to stay active and have fun. Here’s a look at how four different moms, mums, and mothers-to-be balance parenthood with fitness.

“Anna (7 mths prego)” started riding and running on Zwift in early 2019. Her name got people’s attention. As the number grew to 8, then 9, more and more people sent messages encouraging her and asking questions.

“I realized that so many mums were using Zwift for the same reasons I was – convenience, sociability and keeping active,” says Anna Russell. “I noticed there was a group for dads (DIRT – Dads Indoors Riding Trainers) and couldn’t find one for mums, which I thought was crazy!”

So she decided to create one herself. “Zwift Badass Moms,” abbreviated BAM, is a small but quickly growing Facebook group for Zwifting mothers. Russell is also leading a new BAM race team.

“The group is about inspiring, motivating and connecting mums out there on Zwift,” she says.

Russell, a New Zealander, is a triathlete who raced Ironman professionally from 2012 to 2015. She rides and runs on Zwift, and she hopes to compete in a 100km ultramarathon in 2020. 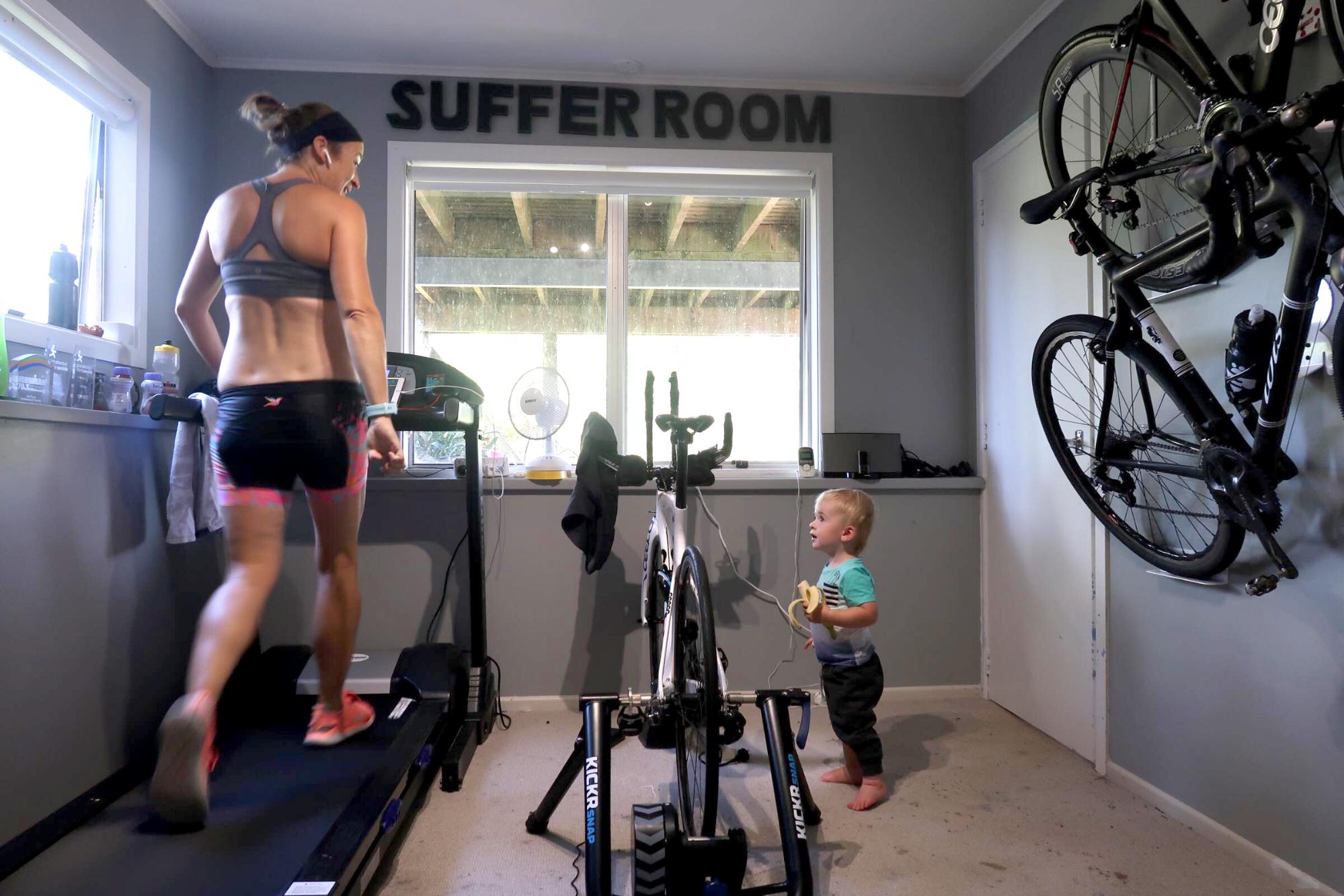 Training is harder with a 2-year-old and a newborn, but she still makes it a priority. She says she appreciates that riding on an indoor trainer lets her jump on the bike when her children are napping or have gone to bed.

“Zwift also offers the social component that just getting on your trainer doesn’t,” she says. “Having young children can definitely lead to feelings of isolation, knowing that a supportive community is just a click away has been immensely helpful.”

Russell encourages mothers to reach out to others for support. Connecting with people and staying active can help reduce stress and ward off post-partum depression.

“Every ride I go on in Zwift I make a commitment to thank those I’ve ridden with, applaud a good pull on the front, generally give a supportive comment,” she says. “This has always led to more chat, a connection formed, and now all those connections have resulted in a group of Badass Moms!”

Amy Levang also kept riding well into her most recent pregnancy – up to 37 weeks. During her last pregnancy, she stopped riding outside when she was 25 weeks along,

This time, she had an indoor trainer and got creative.

“Zwift definitely motivated and enabled me to stay active longer,” Levang says. “I kept modifying my bike to keep me comfortable. First, I moved up my drops. Then I added an adjustable stem. Finally, I ended up mounting TT bars vertically to keep myself as upright as possible. I also switched out to a more plushy saddle.” 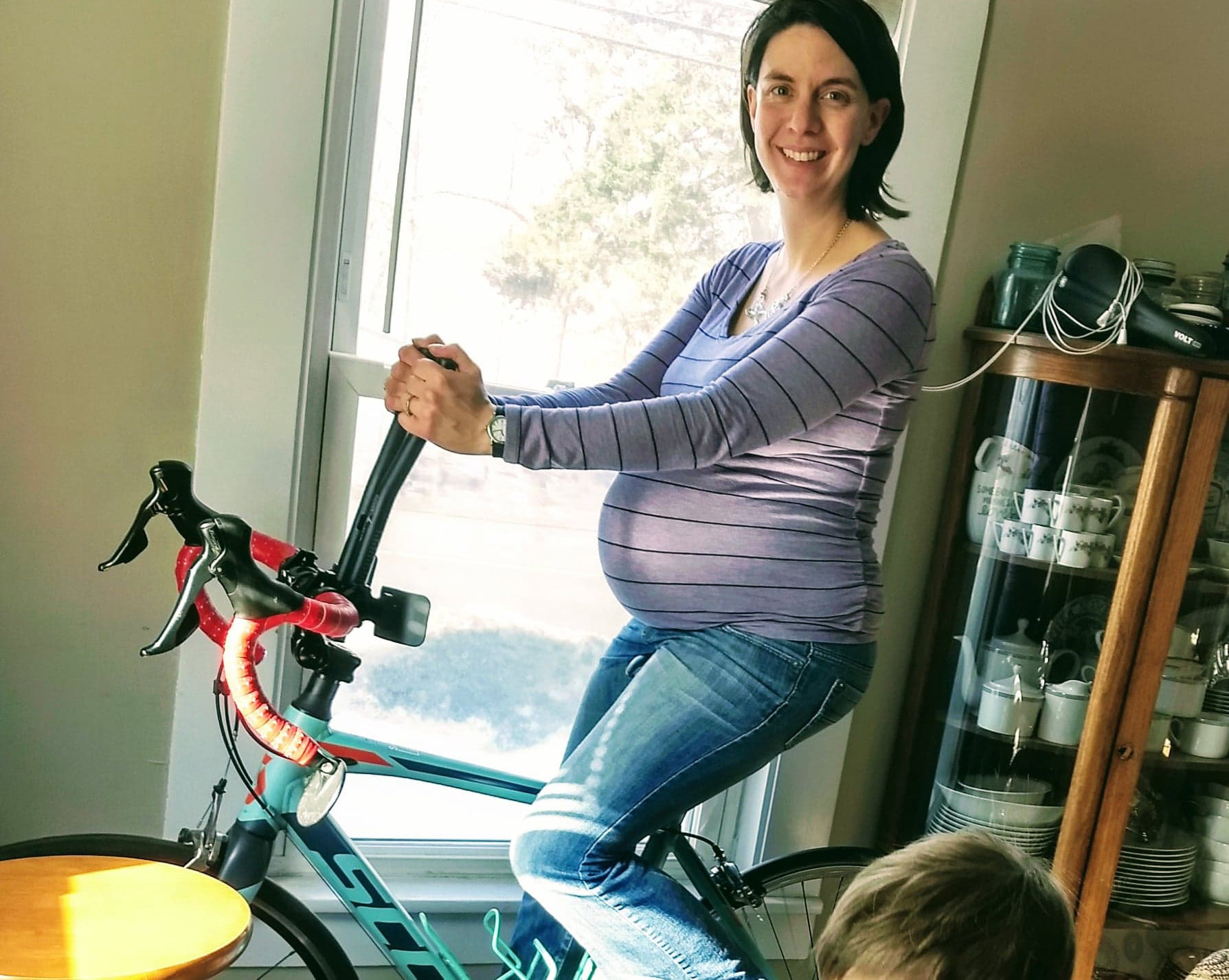 Even with those changes to make riding easier, she still needed something to relieve boredom and keep up her motivation indoors.

“I completely loved both the Canyon//SRAM Zwift Academy and the SRAM Women’s Tour,” Levang says. “They gave me a reason to get on the bike, even on days I really didn’t feel like it.”

It was important to her to keep riding, for the sake of her physical and mental health. Because she stayed active, she was able to ride her bike again outside just two weeks after the birth of her child. “It wasn't long, or fast, but sure felt great!”

Levang now has four children, including her newborn and three others ages 6, 4, and 2.

Training while keeping an eye on them can get a little… chaotic.

“If you ever hear someone refer to a ‘kid flat’ it means they had to get off the bike to take care of something child-related,” she says. “You can have multiple kid flats in one riding session!”

Levang has her bike set up in a room with a baby gate, where her little ones can play or watch a movie or TV show while she takes a ride. That way, she’s always there to fix those ‘kid flats’ when needed!

Stefanie Held and her husband, who live in Germany, discovered Zwift in December 2017. Their daughter watched her parents working out with interest.

“When she said she wanted to try herself, we put her little bike on our (classic) trainer and let her ride,” Held says. (Did you know kids ride free on Zwift?) 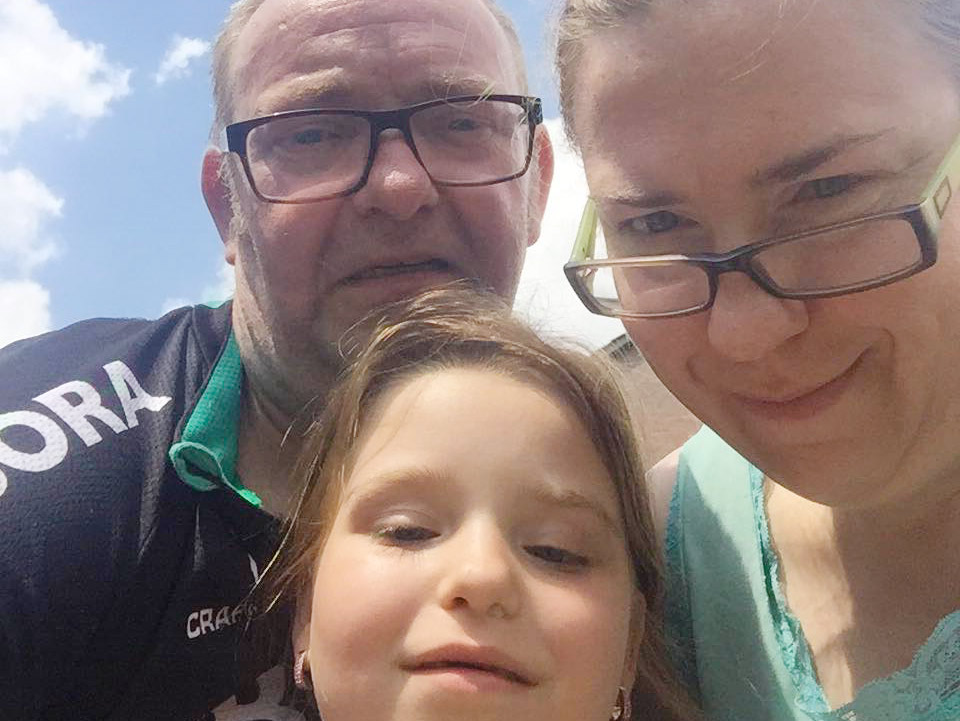 Now her daughter, age 7, loves to ride. She is eager to go to school by bike and ride bikes with her mother. While Held has a blast cycling with her child, she also makes sure to keep some time for herself.

“If I want to ride I often wait until she is in bed. At the worst, I can let her watch TV,” Held says. “For some rides we have an agreement. That’s my kiddy time off.”

This is something she encourages other mothers to take to heart. Held works as a physical therapist and her husband also has a demanding work schedule. But she is careful to guard her time and leave some for riding.

“With young kids like infants and toddlers it’s often hard to find time for yourself, but it still is important!” she says. “Set times where all the family knows it’s your time. With the smaller ones use the nap times. Or get the dad to take care for an hour. Or grandparents. Later, with older kids like my girl, you can get time tables so the kids see the schedules. Explain why you are working out. Let them participate. Make them see the changes in strength and endurance.”

Lora Waloski took up cycling while working as a long-haul truck driver. When she and her husband were expecting her first child, she put her bike away at their Utah home and didn’t bring it back out for several years.

“I knew nothing of smart trainers or Zwift, and simply assumed I would have to wait until my kids were old enough to wear a helmet in a trailer before I’d see my bike again,” Waloski says.

When she finally took her children out on a trailer attached to a bicycle, they had fun – for about 15 minutes.

“I spent two months frustrated I couldn't ride for more than a few minutes, even more frustrated my fitness was completely gone after two children, and at a complete loss of what to do,” she says.

Then, Waloski saw Zwift in an online advertisement and knew it could be the answer. She downloaded it and ordered a smart trainer.

Their finished basement became a “playroom” – for both Waloski and her children. She installed a baby gate around her trainer to protect little fingers from the rear wheel and other moving parts.

They run and play while she does intervals or joins group rides. It wasn’t long before her 4-year old son started watching her, making sure to remind her to put a helmet on her avatar. He now uses a small stationary bike to ride “with” his mother, even though it’s not compatible with Zwift. Outdoors, he recently took his first ride without training wheels. 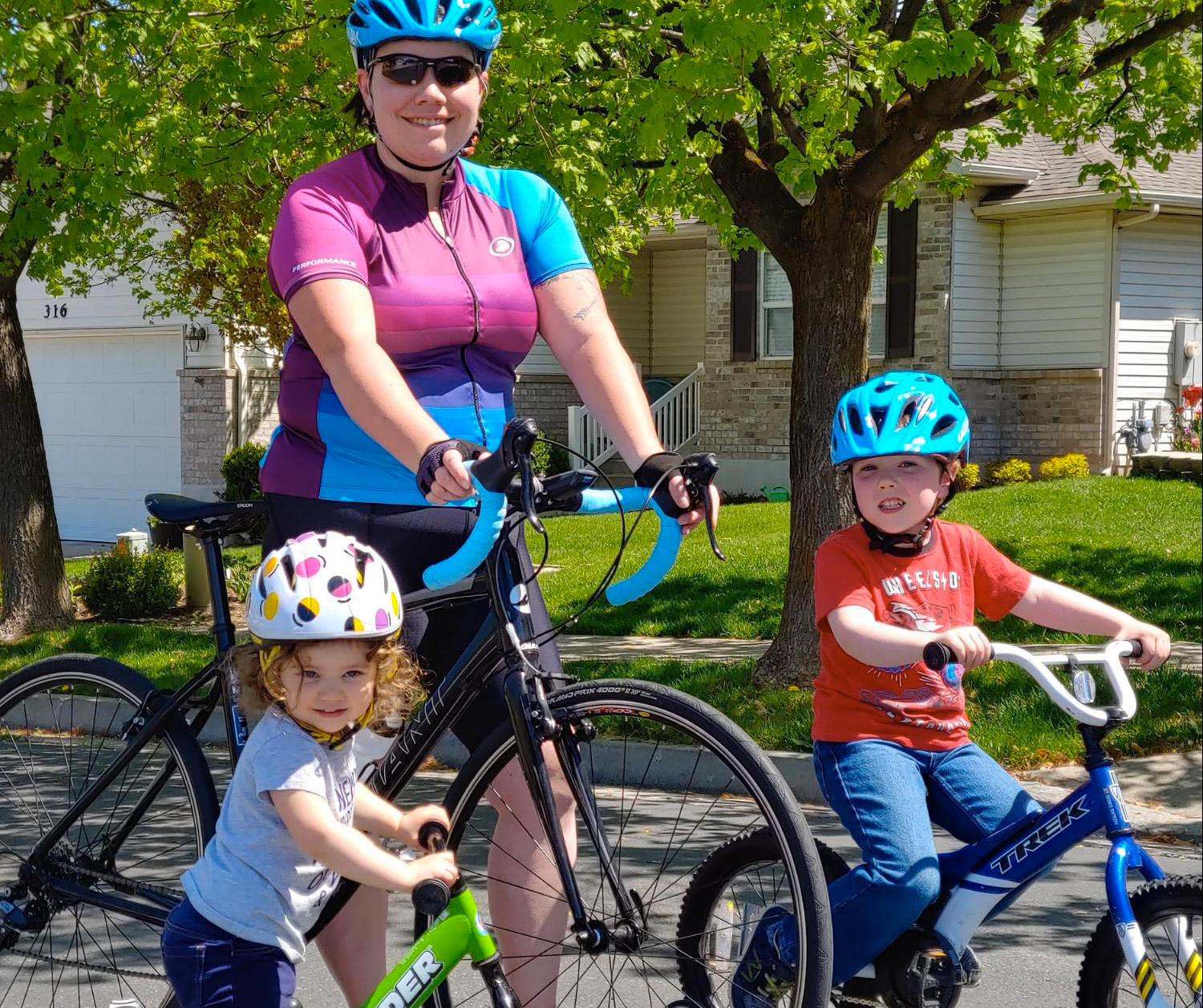 Meanwhile, her 2-year-old daughter loves her balance bike and wants an indoor stationary bike of her own.

Waloski’s husband still works as a long-haul truck driver, so he can be gone for several days at a time. This makes it a challenge to find the time and energy to work out, but she puts in the effort.

“The beauty of Zwift is you don't have to turn around miles from home and figure out how to get back,” she says. “Just log on later when things calm down. My Strava feed is filled with short 5-6km Zwift runs or comments like ‘kids: today isn't happening.’ But then there's days like today – I put down 43km and there was harmony in the house.”

She, like Russell, advises other mothers to make connections through Zwift.

“I love the slow social rides with The Herd. It’s about as close to a group ride as I’ll get to for years,” she says. “Embrace the social side, because that’s the true magic of the Zwift platform.”