Following the success of the first Zwift Runners IRL meetup in Scotland in 2021, there was real enthusiasm within the community to move forward with more events. While the ZLDR Club had been largely responsible for bringing the last event together, this time FMR, led by Stephen and Victoria Cousins, began the Paris Marathon Project.

Keen to support the project, Zwift helped set up twice-weekly training sessions as part of a 12-week training block that began in January. On Tuesdays there was a tough interval session designed to improve speed. On Saturdays an easy run began at 60 minutes and increased by 5 minutes each week to improve stamina and endurance. 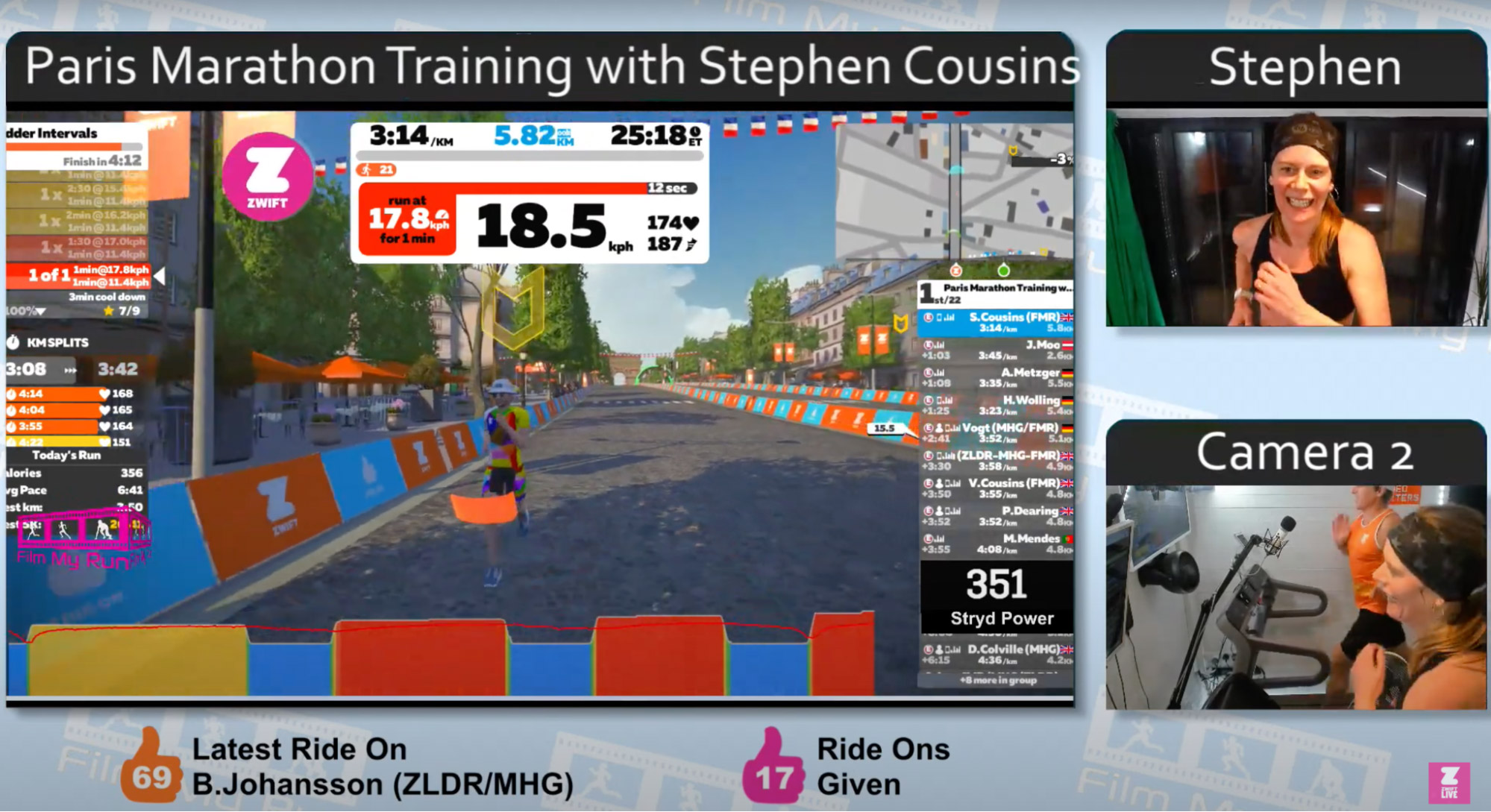 The two weekly sessions on Zwift were designed to complement each individual’s own training plan leading up to the Paris Marathon on April 3rd. Many felt the interval sessions in particular helped in preparing them for the marathon.

The sessions were open to everyone and were attended by many runners who were not going to Paris but were in training for the Boston, Rotterdam, or Manchester marathons around the same time. Many simply joined in for the fun of it!

In all, eleven Zwifters signed up to run in Paris. Kevin de Luca from France, Grace Shin from Boston, MA, and Cecile Forland from Norway had all taken part in the Loch Ness meetup and were very keen to do it all again in Paris. 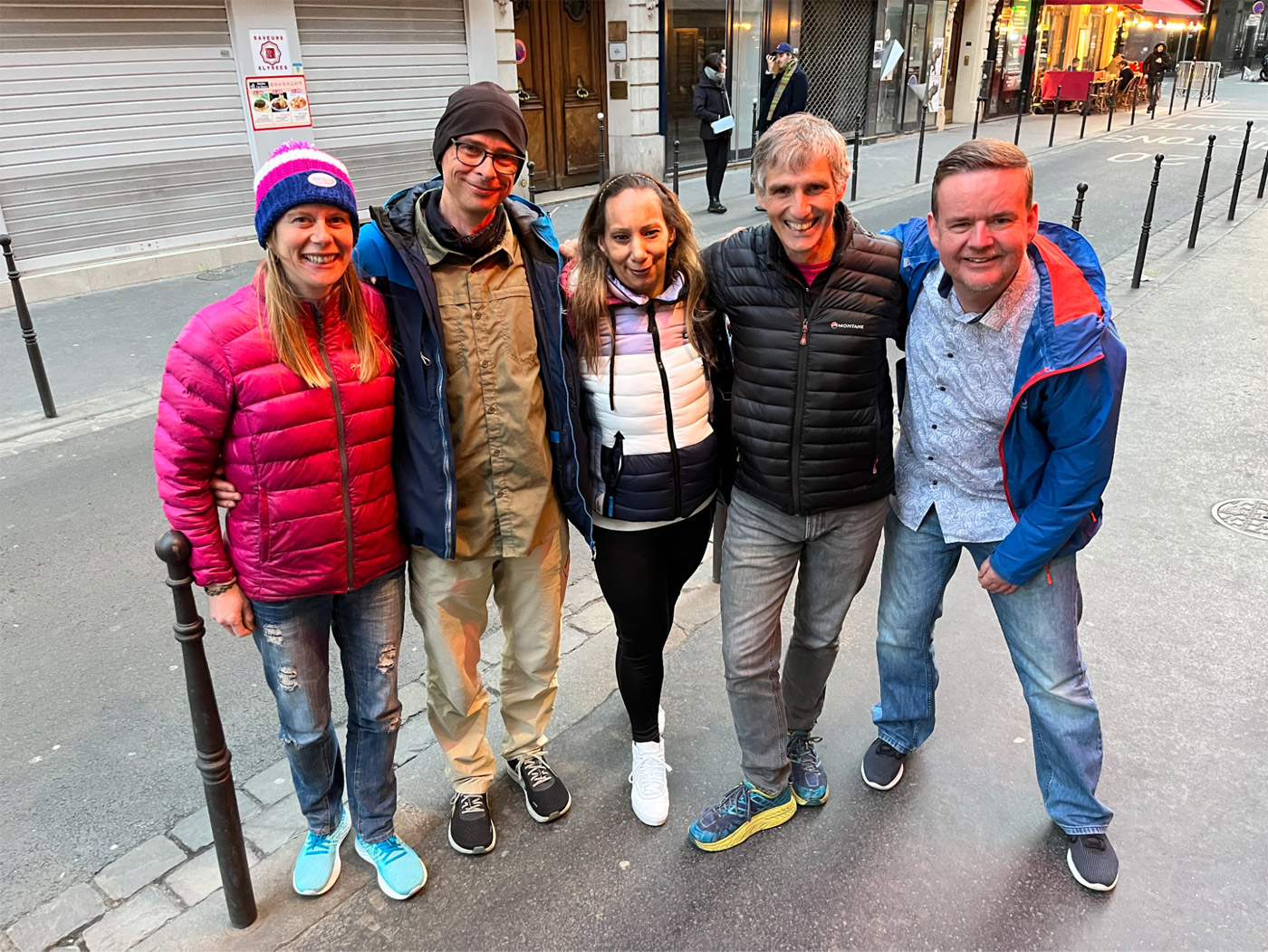 Jamie Caesar from Atlanta, GA decided to make it a family holiday and was going to run his very first outdoor marathon. Theo Heldoorn signed up from Norway along with Sebastian Vogt from Germany and Jackey Ramos from the Netherlands.

Paris in the Spring

Twelve weeks of training disappeared in a flash. Flights, ferries, and accommodation were booked. Grace and Jamie took on the role of finding restaurants that could accommodate 11 Zwifters and their families for two meals across the weekend.

Everyone was as ready as they could be. Even the prospect of freezing temperatures and snow didn’t put anyone off making their way to Paris! Despite not being an Abbott Marathon Major, it is one of the largest marathons in the world in terms of participants. Only New York can boast more runners.

Meeting at the Expo

Like all big marathons, Paris has an expo - a running show where participants go to collect their race number and browse countless stalls filled with clothing, shoes, gadgets, nutrition, and hydration products. 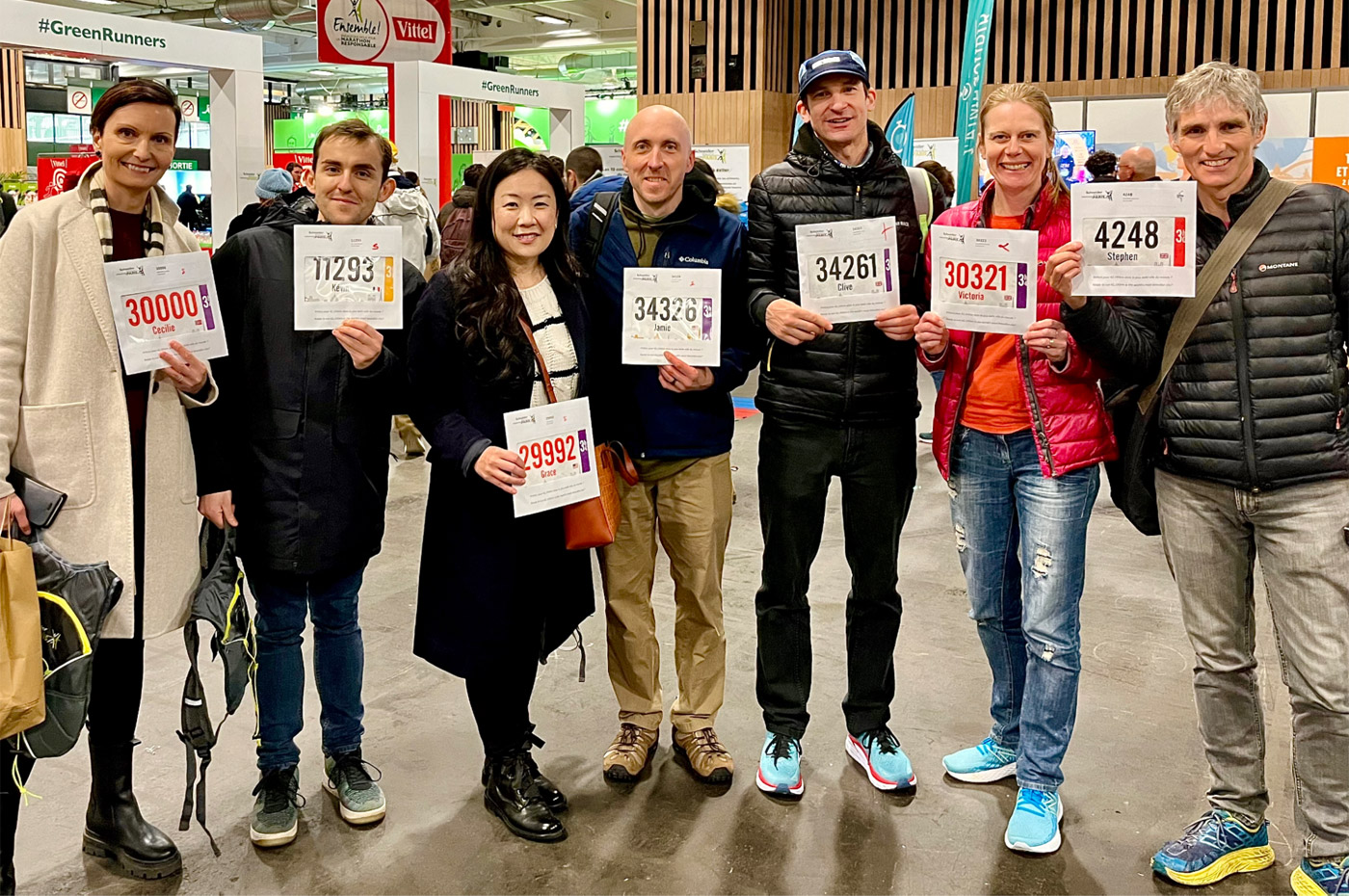 A core group of Zwifters managed to arrange their schedules to collect their race numbers and meet at the expo on the Friday before the race.

MHG’s Clive Finnemore and FMR’s Stephen Cousins were the only two brave souls to get out of bed early to attend the regular 5k parkrun event, held every Saturday morning in Bois de Boulogne. 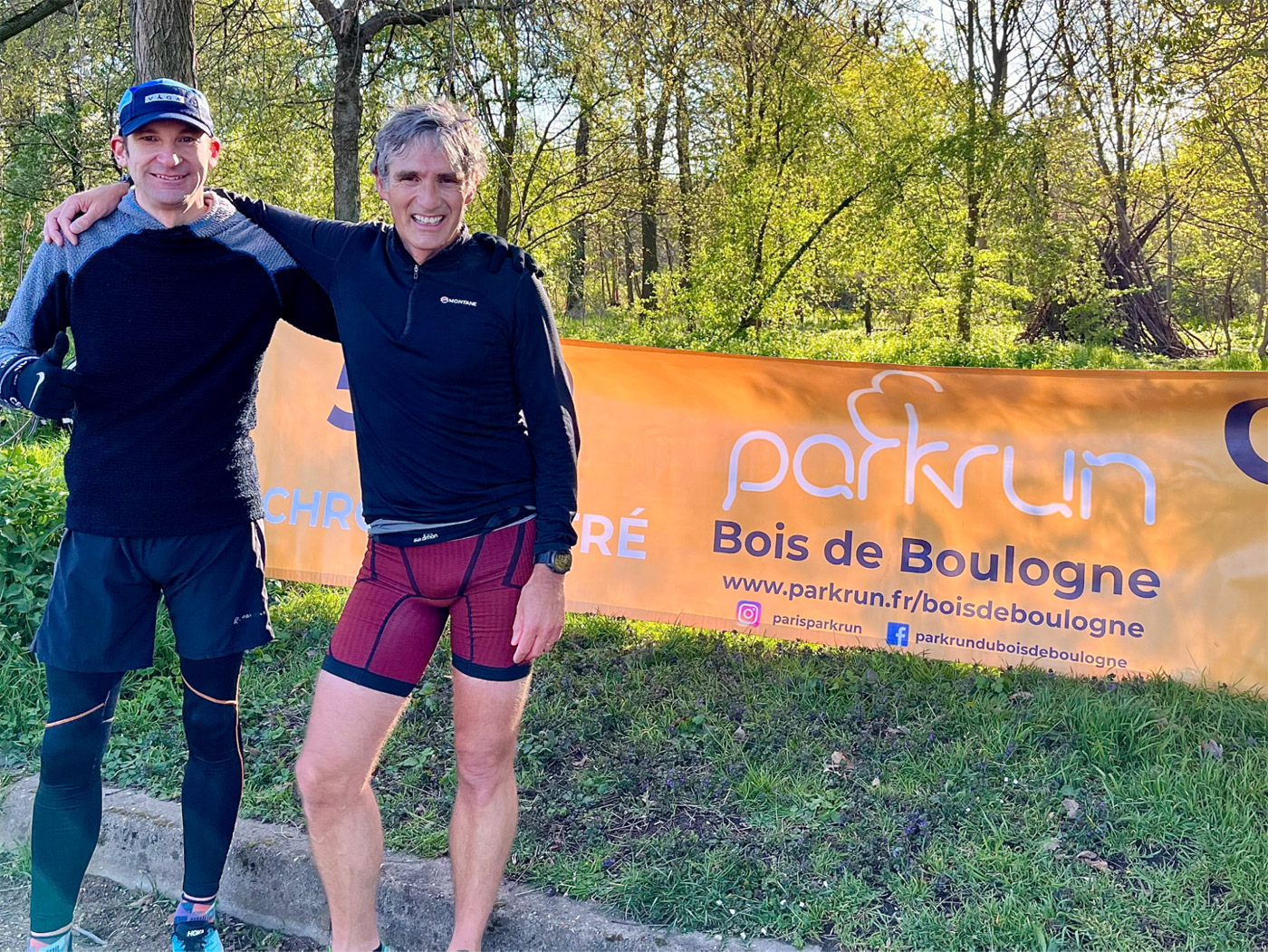 Despite the beautiful sunshine, it was bitterly cold. Sweaters were worn for the first of two laps around the lake!

Bois de Boulogne actually features as part of the Paris Marathon route towards the end of the race, so it can be useful to see it prior to arriving there 35km into the marathon.

On the Saturday evening before the race, the entire team was finally able to meet in person. Having spent months running together on Zwift, it was so exciting to come together and meet online friends in the flesh for the first time. 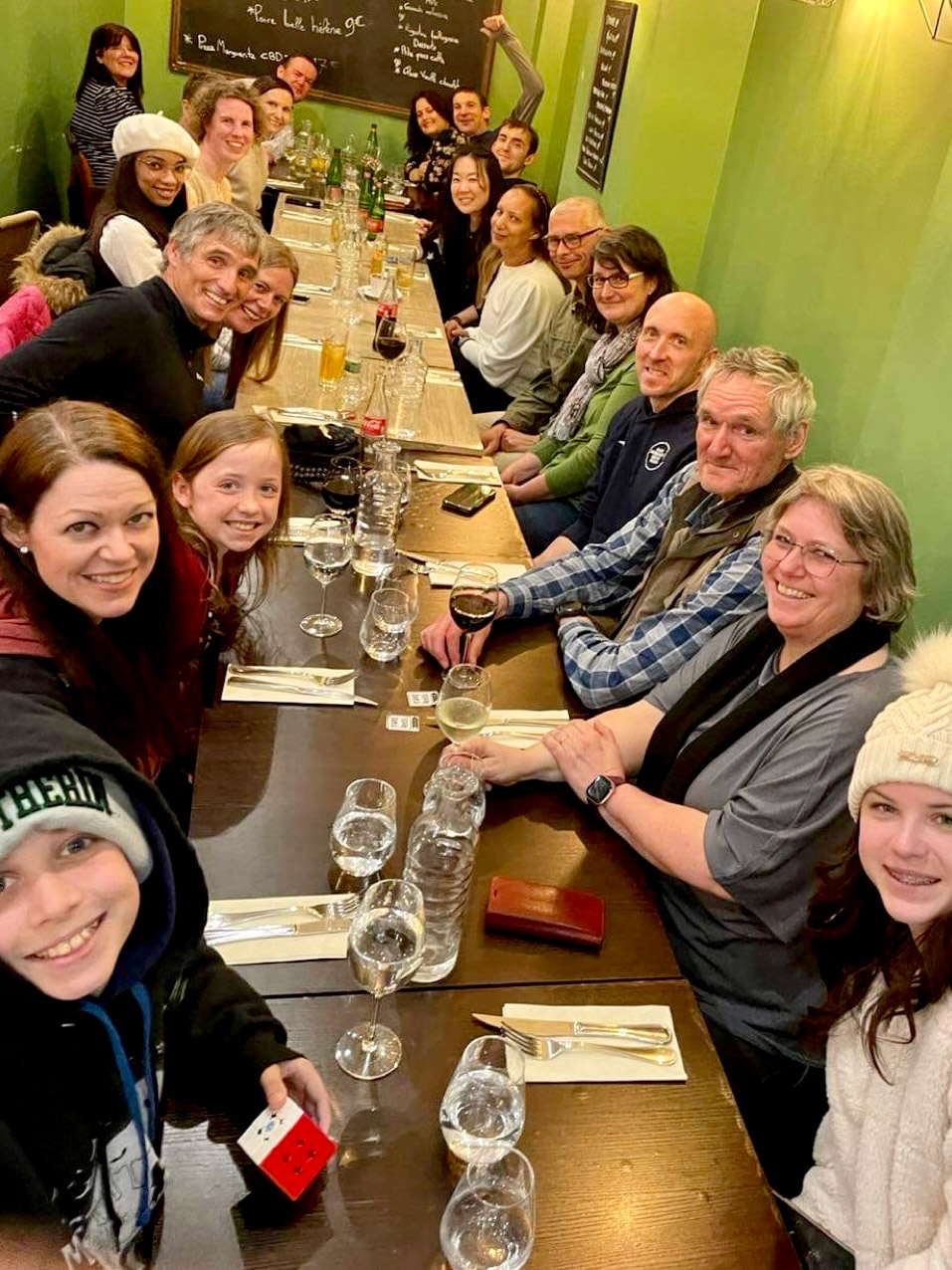 Many Zwifters had brought their friends and families with them. The restaurant was packed and the atmosphere was electric with anticipation.

As luck would have it, most Zwifters in the team were in the same starting corral and would be setting off at around the same time. So eight of the group met at the Arc de Triomphe, with some more wrapped up than others against the cold! 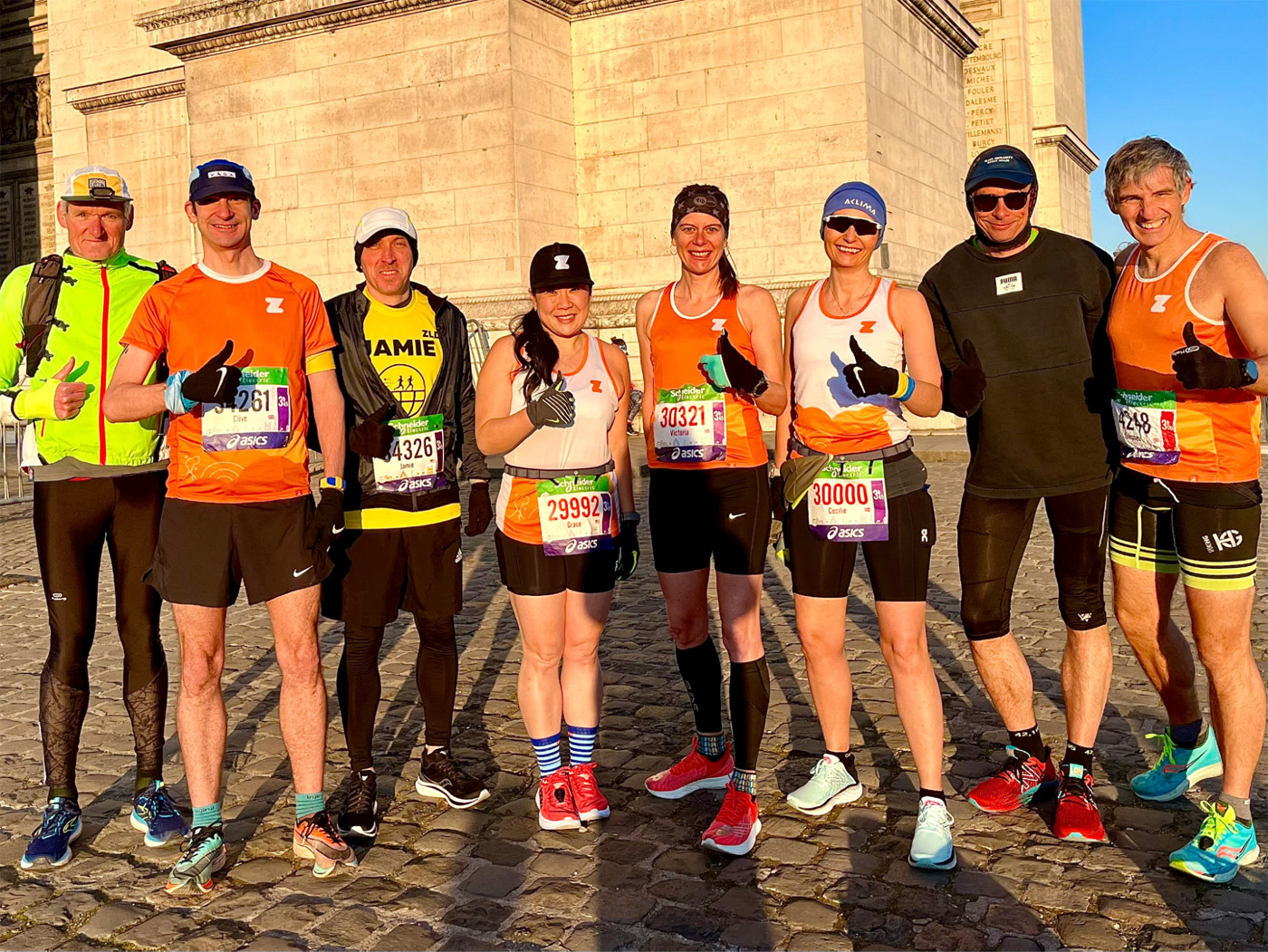 Theo, Clive, Jamie, Grace, Victoria, Cecilie, Seb, and Stephen were all looking to run just under or just over 4 hours.

Kevin de Luca was already on his way, hoping for a finish under 3:15, while Jacky Ramos and Leigh Riby were hoping to come in around 5 hours and would be starting their race a little later.

The Paris Marathon is alive with so many iconic sights, from the start on the Champs-Élysées to Place de la Concorde, Rue de Rivoli, Bastille, The Louvre, The Seine, Notre Dame, and the Eiffel Tower. It’s a challenge to manage your race sensibly without getting over-enthusiastic and racing ahead to the next tourist attraction!

The weather was perfect: cold but bright and sunny. Jamie and Ceclie headed off together at the start. Grace and Theo settled into a slightly slower rhythm. Victoria, Seb, Stephen, and Clive planned to stick together for the duration of the race. 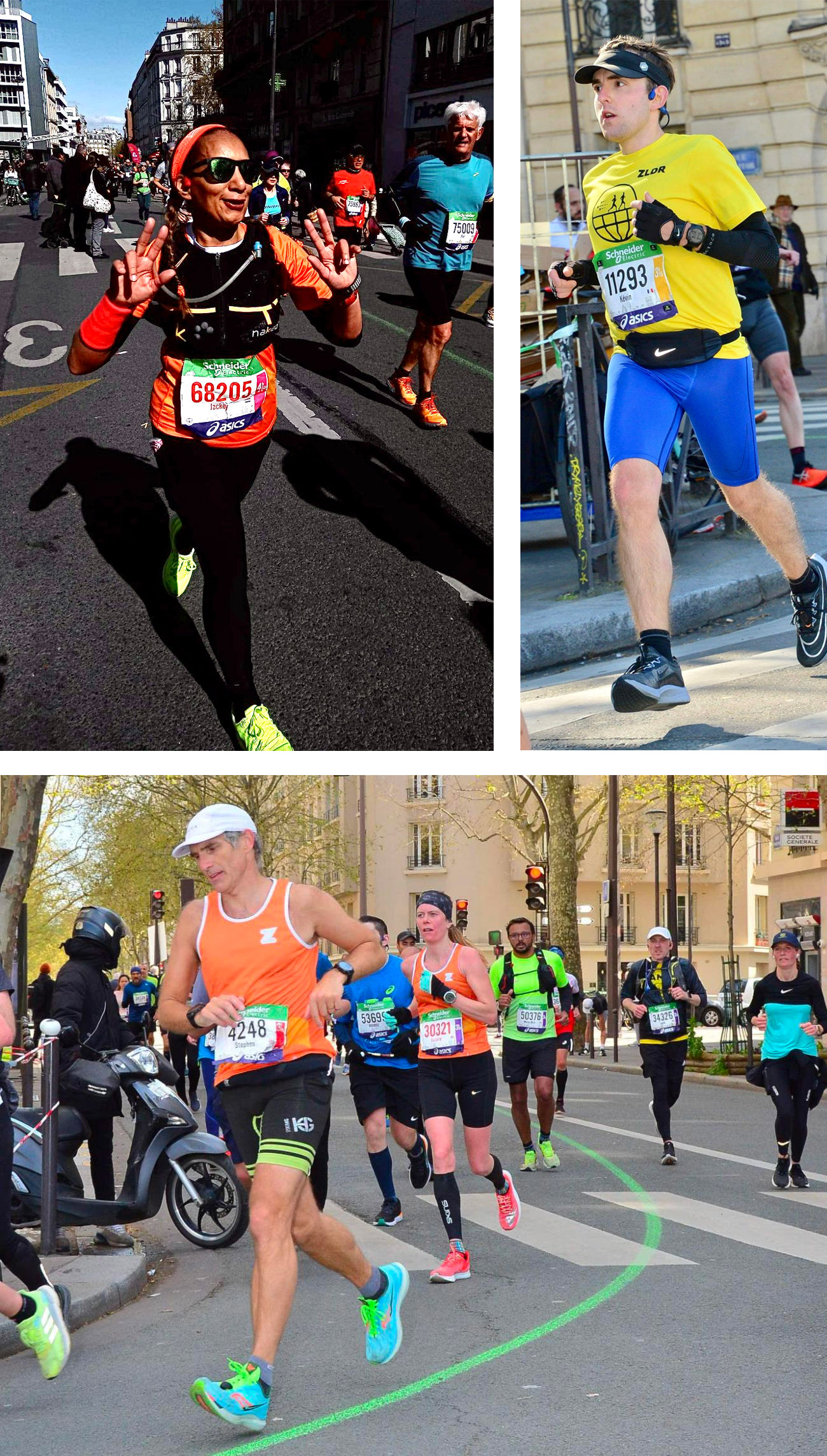 The early miles head past the Louvre along Rue de Rivoli to Bastille. From there runners head into the first of two parks. Bois de Vincennes is the site of Château de Vincennes, an impressive palace in this expansive park. 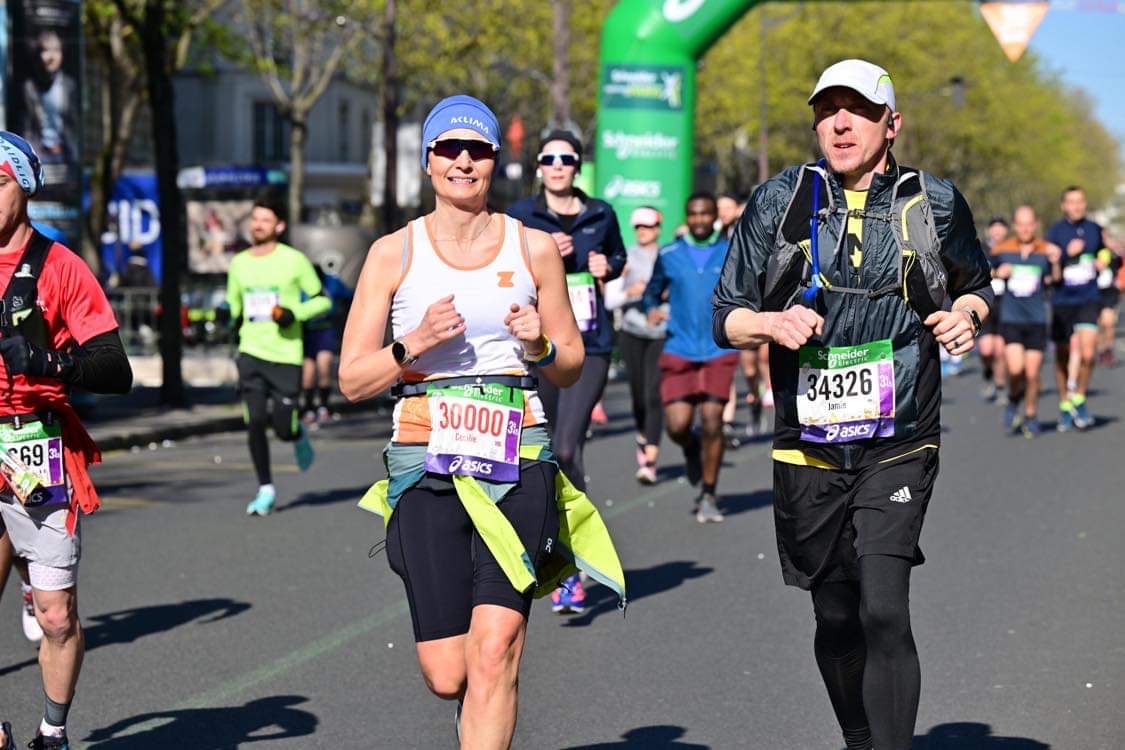 The route was lined with live bands, drummers, and dancers. The crowds lined the route almost the whole way and at various points they closed in and created a narrow and intense alley of noise. 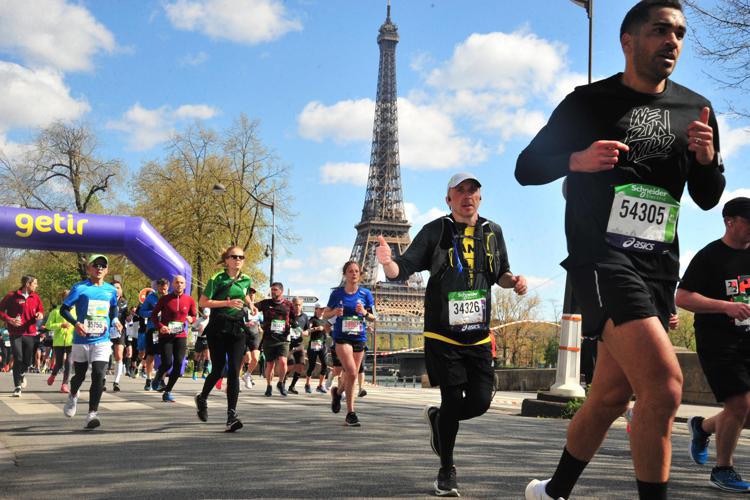 Once past the Bois de Vincennes the Paris Marathon takes runners back past Bastille and the Louvre and onto the banks of the River Seine. At 20 miles the Eiffel Tower looms large on the left and all that’s left is to run through Bois de Boulogne, the second park, to the finish. 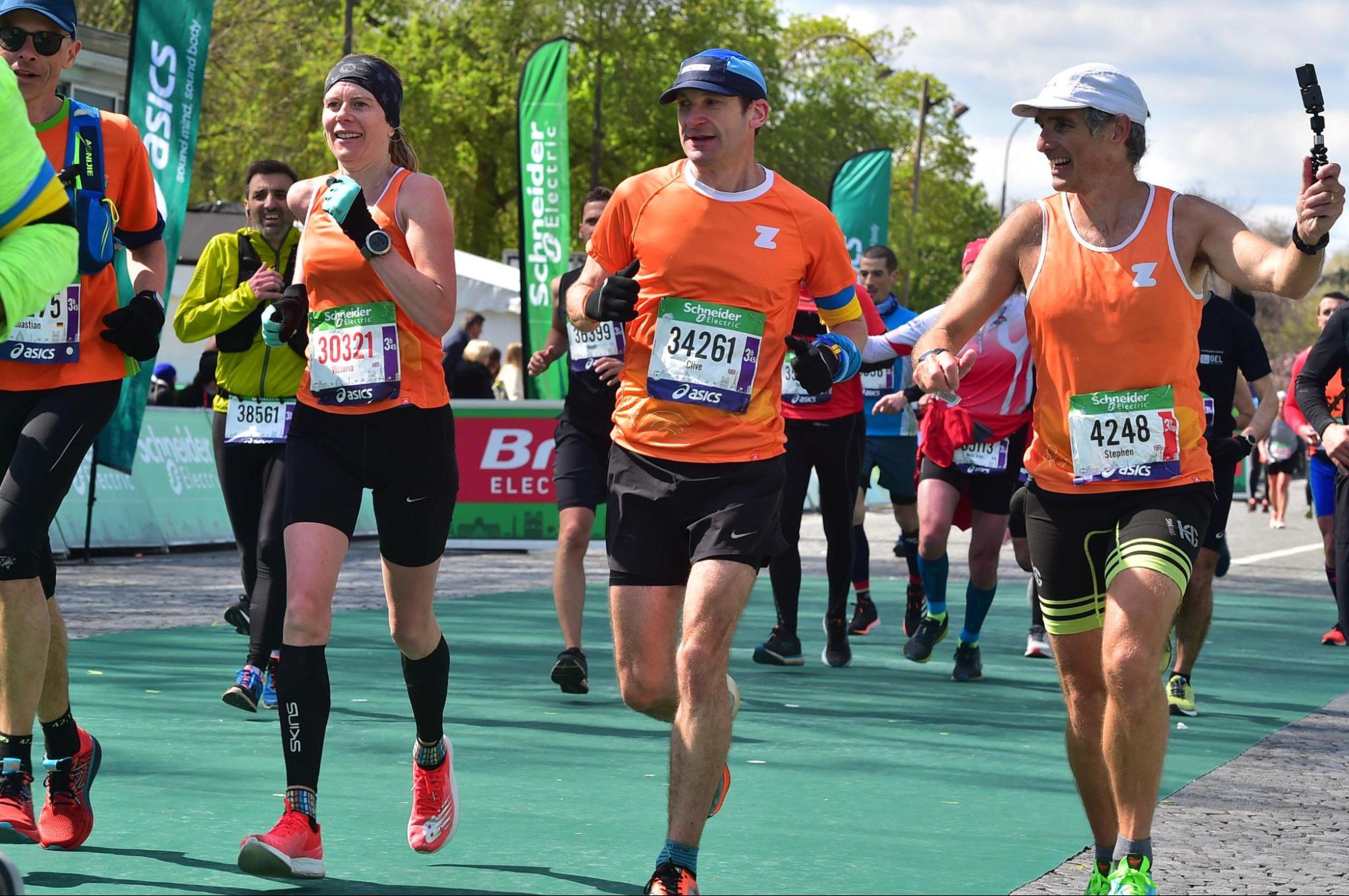 After 42km of running there were some incredible achievements. Kevin de Luca smashed his PR with a time of 3 hours 11 minutes. Victoria and Cecilie both achieved PRs and Boston qualifying times with Victoria hitting 3:47 and Cecilie 3:44. 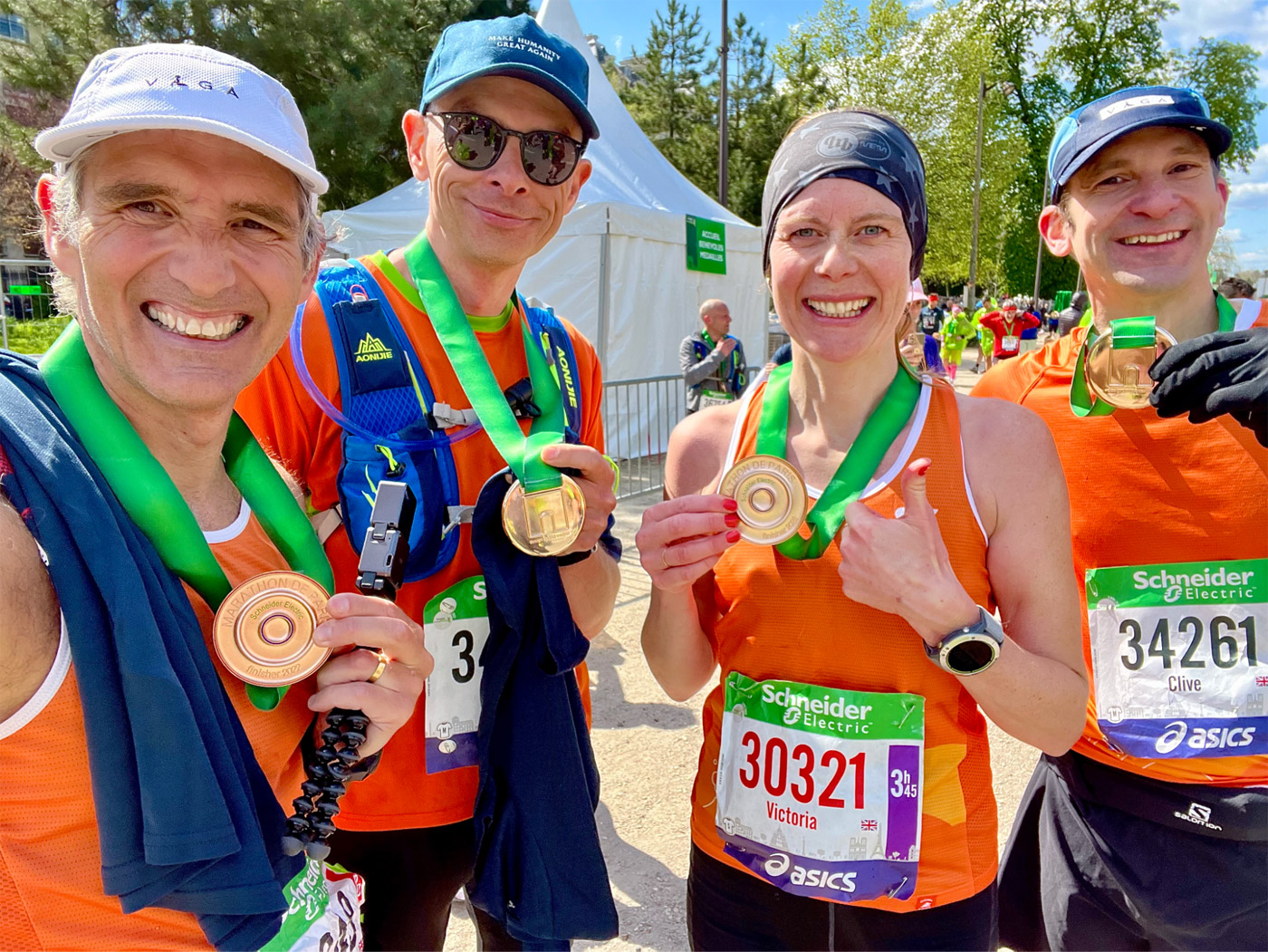 Jamie was superb in his first-ever outdoor marathon, coming in at 3 hours 54 minutes with Theo Heldoorn not far behind in 4:05. In her 12th marathon, Grace made a very respectable 4:31 and Leigh and Jacky did incredibly well with times just over 5 hours.

That evening at the celebration meal the team was joined by Salim and Halima Adrien who are regular Zwift runners who live in Paris. (Unfortunately, Salim is currently injured and was unable to run the marathon.)

Also in attendance was Karel Bruneel, another Zwifter who traveled to Paris with his wife merely to support and it was great to see them cheering the runners on in the final 10km. 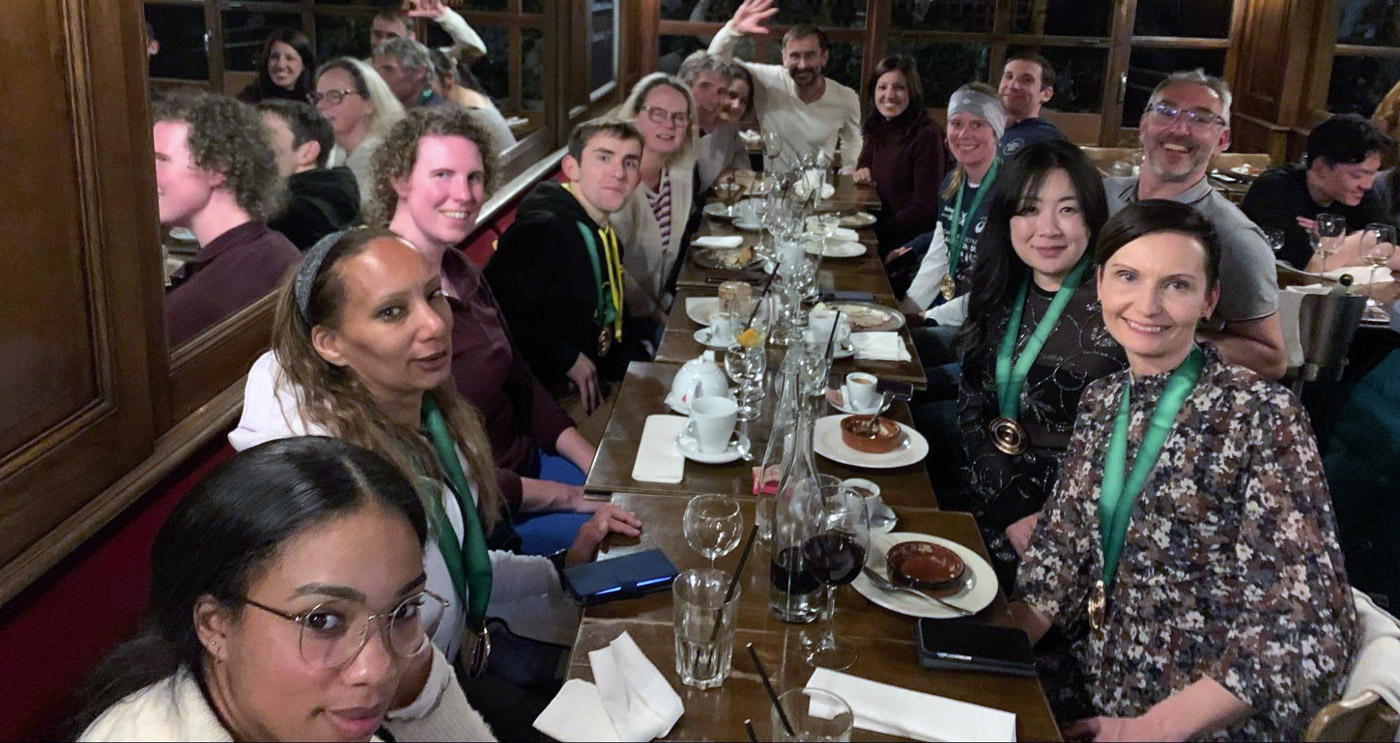 Back Again Next Year

It was a splendid weekend thoroughly enjoyed by everyone, with more friendships cemented and more bonds created between runners from all over the world. Experiences that will live long in the memory and smiles that will last a lifetime! 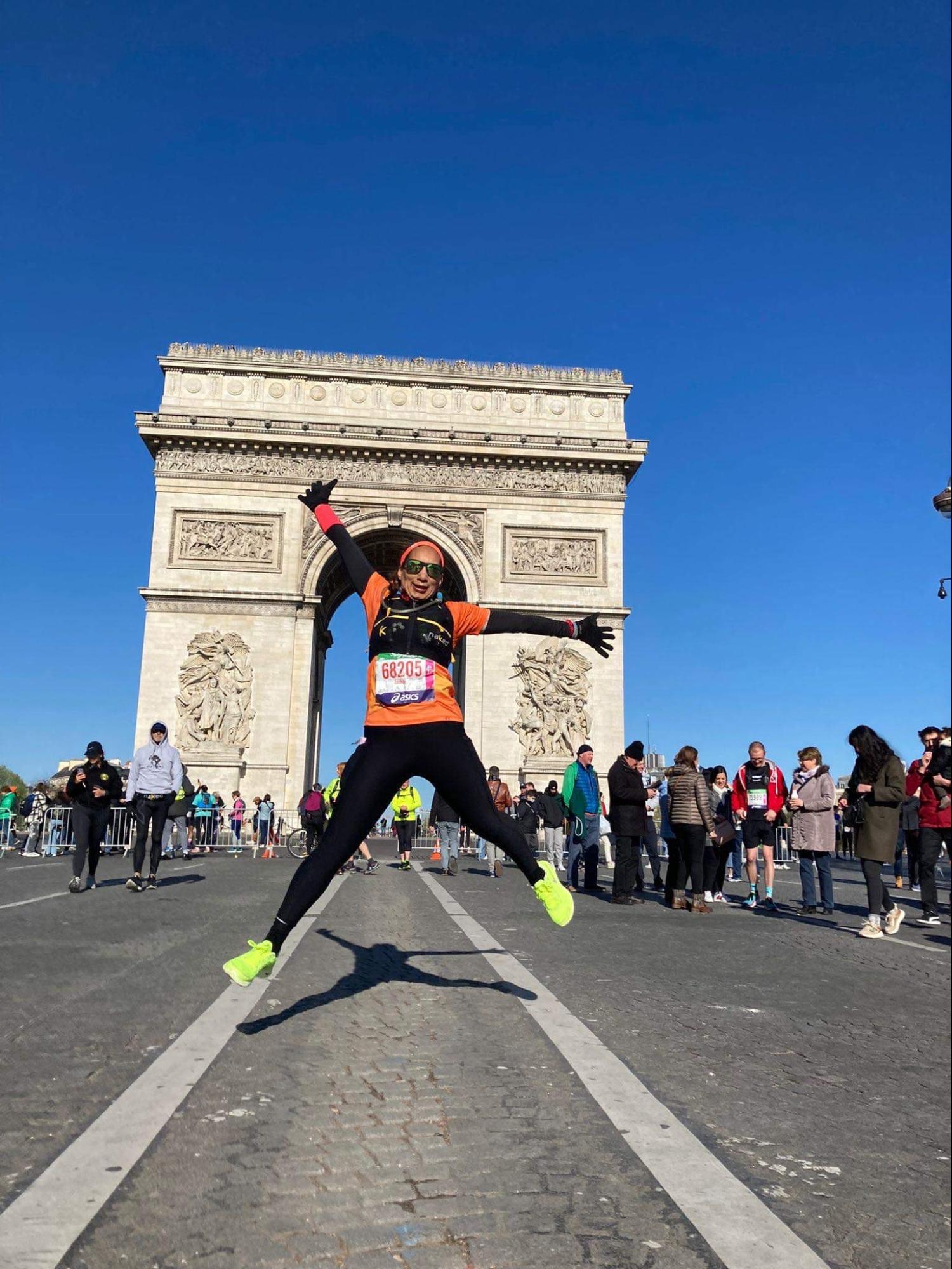 No sooner was everyone back home than talk began of next year. If you would like to get involved then keep your eyes open on the Zwift Runners Facebook page for more information. There are already Zwift runners signed up for next year’s Paris Marathon and it will be awesome to see some new faces along with old friends.