The Ride: When Plans Change

After two years of cancellations and setbacks, two friends who met on Zwift finally got to take an epic ride together.

“I’m looking forward to riding for 8 days from the south of France to the Netherlands,” said Maarten Visser before the event. “When I tell people about it, they say, ‘Are you crazy?’”

The two rode together every day, forming a small peloton with others as part of a larger tour called “The Ride.”

“Maarten and me had an amazing time and we have memories for life,” Bastiaan Gaillard said. “From the (Mont) Ventoux we crossed Alpe d'Huez, the (Col du) Glandon and many other climbs. The whole atmosphere is absolutely fantastic. Put 275 cyclists together for eight days and you are sure to have big fun.” 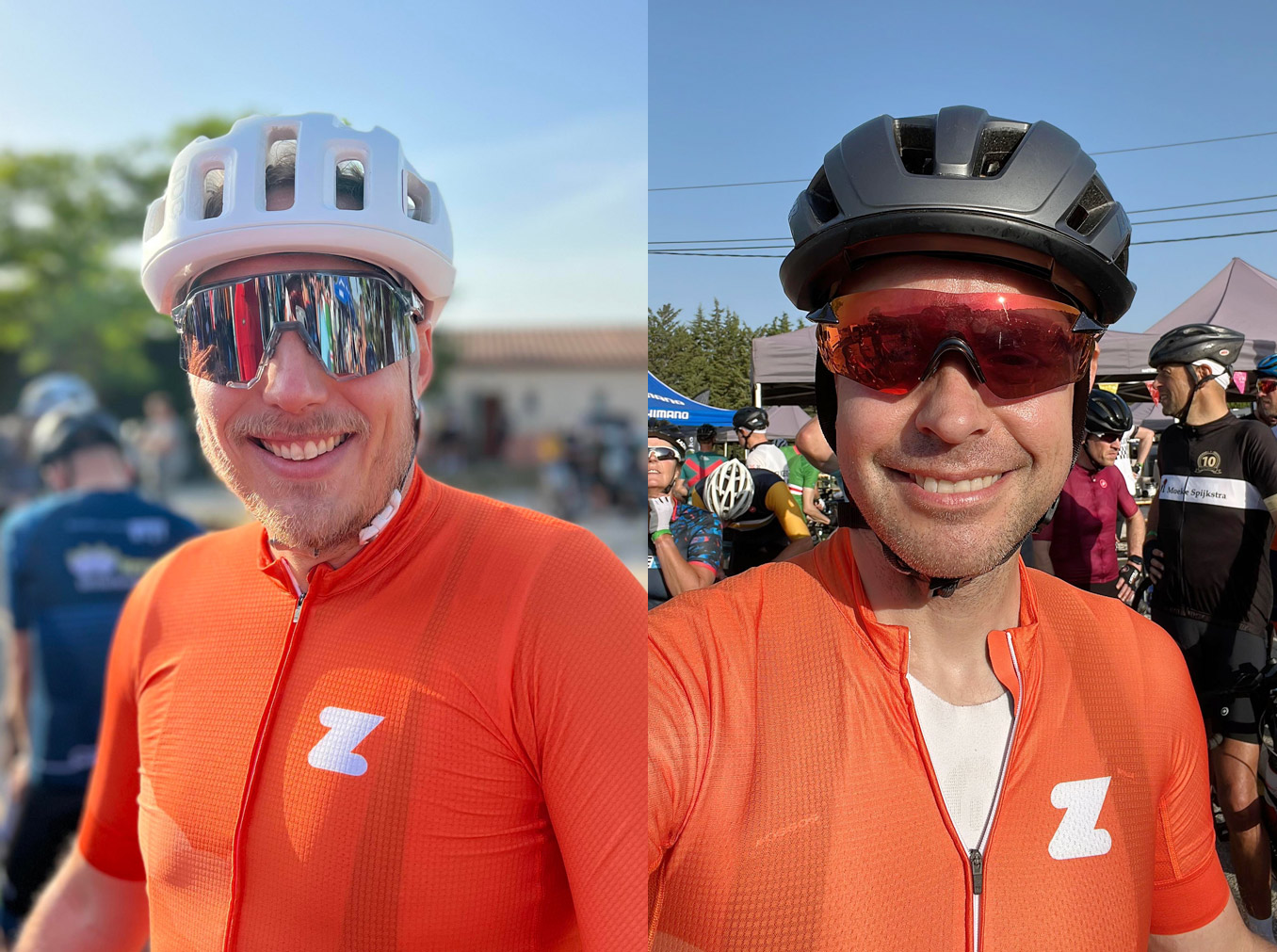 Gaillard and Visser first met and became friends on Zwift, where they later trained together for months to take a challenging multi-day bike tour.

Their first planned event, “The Ride Pyrenees,” was supposed to take place in September 2020. It was canceled due to the COVID-19 pandemic. They were disappointed, but they looked ahead to their next goal, an even bigger event called “The Ride” in June 2021.

That ride didn’t happen, either.

What do you do when your plans change, and the goal you were working toward is no longer possible? Gaillard and Visser, like many during the COVID-19 pandemic, faced that situation for two years.

“I lost a bit of motivation,” Visser said. “There were two tough years with not a lot of events going on... I tried to stay motivated and keep pushing the pedals. It’s hard even on Zwift, because what are you training for? I think a lot of people have experienced the same thing.”

Gaillard agrees, saying it was hard to know if the next thing they were training for was even going to happen.

In 2020 and 2021, the pair started riding less and less, while their lives got busier in other ways. They started a YouTube Show called “Het is Koers TV” (named for their cycling club), chatting with professional cyclists and others in the industry. Gaillard soon got a job working with Shimano and left the show, but Visser, a geography teacher, kept it going with another host.

Recording an episode for Het is Koers TV

As 2022 began, Visser and Gaillard found the motivation they needed to get back on the bike. The Ride was back!

They finally had another goal that was likely to stay on the calendar, in early June. Both were eager to get pedaling and rebuild their fitness.

“I started training in January from a serious point again,” Visser said. “Using Zwift, I rode a thousand kilometers in January. Before that, I was not doing a lot.”

Just as they were building up time in the saddle, both of them got sick with COVID-19 – another setback. They had to go back to their familiar routine: take a break and slowly begin training again.

This time, Gaillard said, it really helped to have a goal and mark a date on the calendar.

“If I have a date on the schedule, I know I need to focus,” he said. “Now I need to get training done.”

This is something anyone can do if they’re struggling with motivation. Set a goal or a target, even if it’s a small one, so you’re working toward something with your training. At first, try something that will take some effort but you know you can reach.

Together on an outdoor ride

Visser says when he isn’t feeling like riding, he reminds himself that he feels better when he does. He will sometimes put out his cycling clothes in advance in a place where he’ll easily see them. This reminds him to ride and puts him one step closer.

Other people can be another good source of motivation, and Zwift offers lots of chances to get social! Visser soon realized that the group rides he used to join and lead were now too fast for him. He was discouraged at first, but he focused on what he could do instead of what he couldn’t.

He started riding with Zwift’s Pace Partners. Doing this, he could drop in with other Zwifters around his level at any time, riding with them for as long as he wanted.

After trying to ride as much as possible in a month, Visser decided to take a more structured approach to training. He enrolled in Zwift’s Gravel Grinder training plan. This would prepare him for some planned gravel and cobblestone rides while building his fitness for the big event in June.

Training plans provide small things to work toward each week and each day of training. A rider can focus on nailing those hard intervals, getting that cadence up, or just showing up for every scheduled workout. Many professionally-designed plans will gradually ramp up time and intensity so you don’t burn out too soon.

Meanwhile, Gaillard had a similar idea. He imported workouts from the Dutch national cycling association and began following a structured training plan they designed.

Hearing this, Visser laughed and said, “You did not tell me this. I could have done that as well!”

The pair often trained together on Zwift while they were preparing for The Ride two years ago. Now they focus more on their individual workouts. Both are fathers who say that training indoors is a big help for them, and Zwift helps to keep it from becoming boring.

“It’s really working for me,” Gaillard said. “I want to cycle after the children are asleep, but I’m not able to ride outside because it’s dark. I do not really feel comfortable doing that.”

With custom workouts, you can create your own workouts or import them to Zwift if a coach or another training program creates them.

Gaillard and Visser did manage to fit in some rides together, including some outdoors. In May they headed to Limburgh, seeking out rare hilly terrain in the Netherlands for a training weekend. Another cyclist training for The Ride joined them.

This year, The Ride was a bit different than the one they were planning. Originally, it was set to start with the Stelvio in Italy and end in the Netherlands, visiting 8 countries in total. This year, it started with Mont Ventoux in France and visited only 5 countries on the way to the Netherlands, including Switzerland, Germany, and Belgium.

It was still an epic 8-day ride with beautiful scenery, and the distance and elevation they covered is close to the original plan – 1,300 kilometers with 17,000 meters of climbing.

“To start the adventure with Ventoux, I think that’s amazing. Indescribable,” Gaillard said. “The day after is Alpe d’Huez. The day after that is Col du Glandon.” 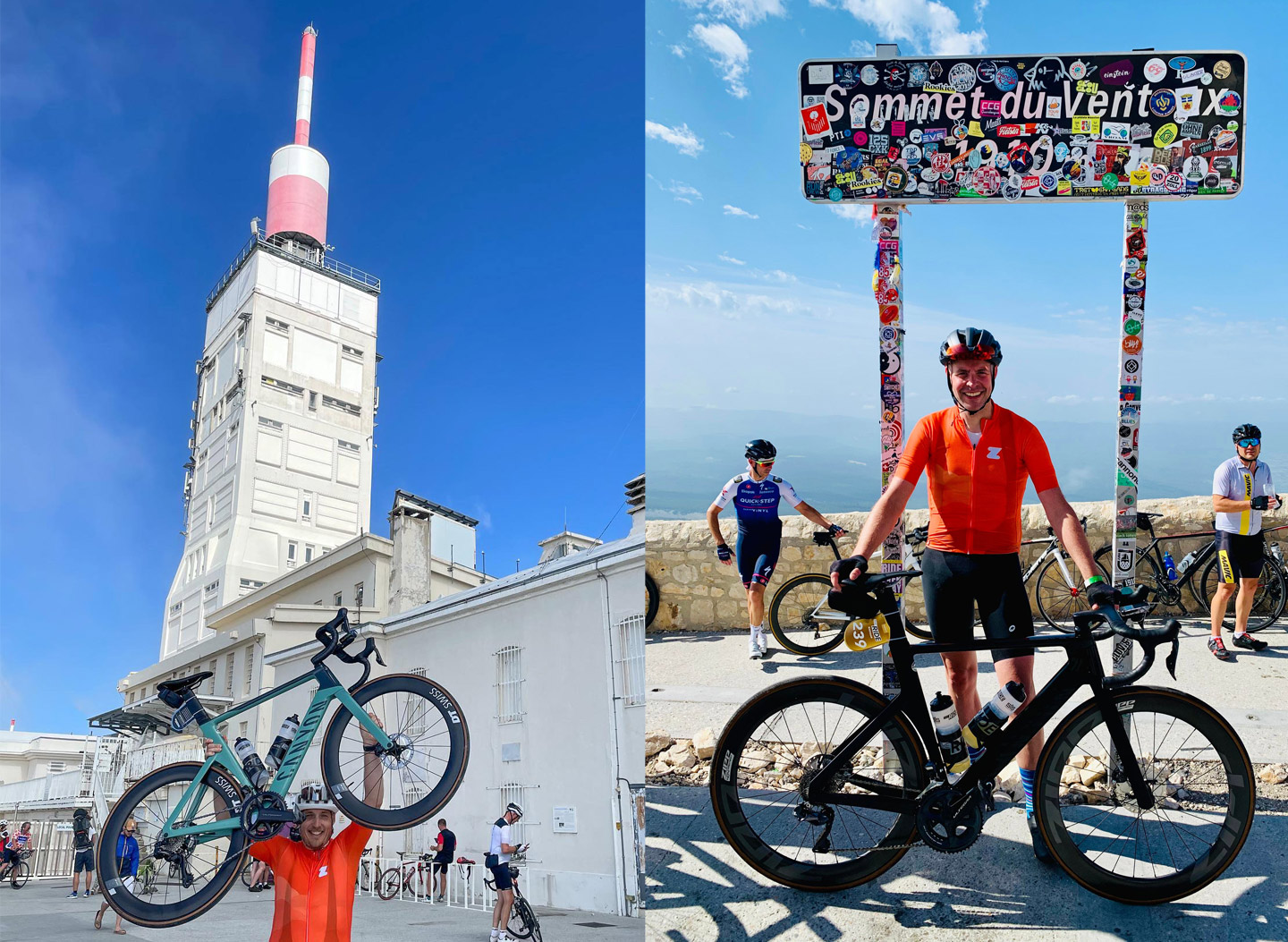 Visser and Gaillard atop Mount Ventoux

As the tour went on, the high mountains turned to rolling hills and a little bit of flatland. Then the riders headed to the Ardennes region, where they hit some shorter climbs found in classic races. Each night, they would camp out and reflect on the day with their fellow cyclists.

“It’s not a race. You need to enjoy the environment,” Gaillard said. “The route is beautiful, and you’ll see some great things.”

Visser agrees. When coming back to training, he says he had to learn not to set expectations too high for himself. His goal coming into the ride wasn’t to compete or race. It was to experience a week of cycling through stunning landscapes with friends and fellow bike lovers.

“You know what level you had, and you need to constantly accept that that’s not who you are right now,” he said. “I taught myself to let go of my competitiveness and just enjoy the ride.”

Are you starting to train again after taking some time off the bike? Check out the Back to Fitness training plan! It will ease you back into riding so you can start working toward a goal of your own. Preparing for long rides? The Fondo and Gran Fondo training plans are good options.

Operating system deprecated? With Zwift, you have options! 3 months ago