Riders, donors, and organizers: Take a big bow. You’ve successfully—very successfully—just reached the finish line of every part of the second annual Ride On Zwiftathon for World Bicycle Relief (WBR). With the Zwift community's $135,000 raise matched 1 for 1, WBR’s annual Zwift fundraising campaign concluded after raising over $270,000 as of Friday, December 9th. That’s enough money to put many hundreds of people in developing nations on new WBR bicycles—bicycles that change lives.

The Zwift community played a huge and impactful role in the WBR fundraising campaign. On December 3rd, Zwift riders jumped at the 24-hour window of opportunity in which they could contribute.

You see the awesome numbers in this story’s infographic: Over 14,000 Zwifters, hailing from 87 countries, logged nearly 321,000 miles for the cause. Trek alone honored our efforts by donating $45,000 after together we’d ridden 250,000 miles. 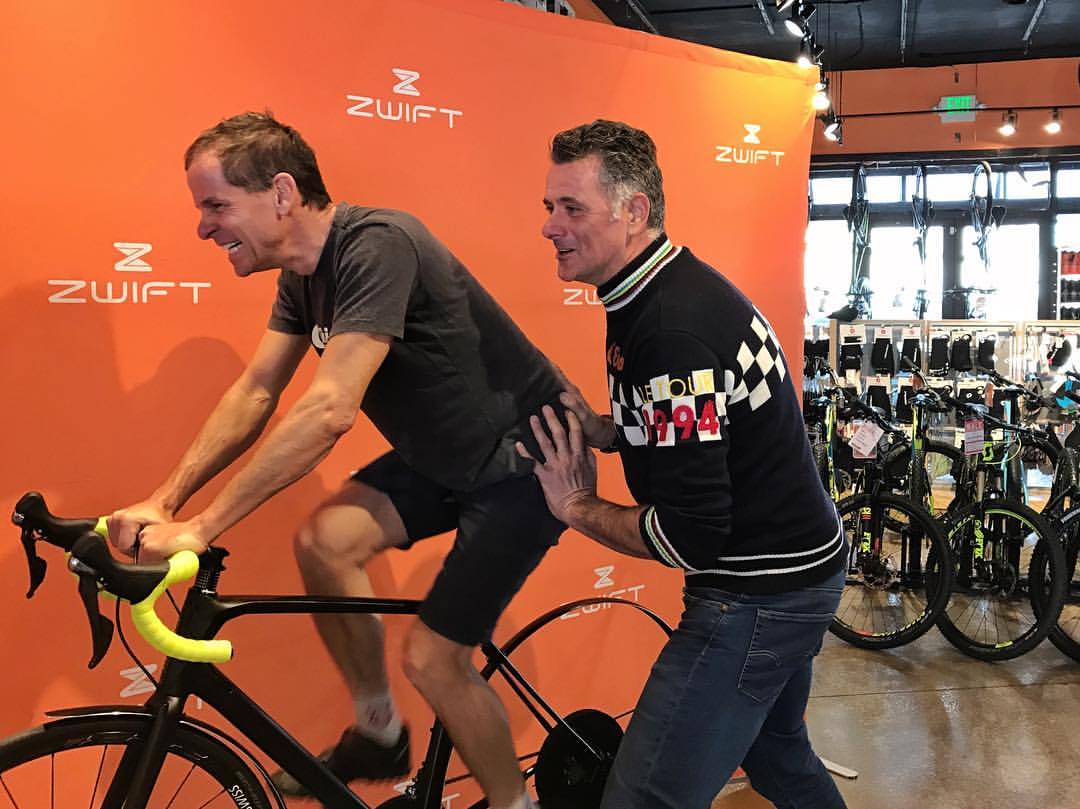 “Wait for me!” Hampsten said with a smile during the YouTube broadcast of his effort, as Zwifters passed him when his pedaling finally slowed. “This is just like a real ride.”

The Zwiftathon was indeed a real ride for lots of Zwifters. Derek Boocock, a Brit who lives in the northern Holland city of Groningen, rode 731 kilometers (454 miles) over the 24-hour period. The 60-year-old cyclist, who leads Zwift’s weekly imperial century ride and holds the Zwift distance record of 1,620 km (1,006 miles; ridden in 52 hours 37 minutes over a 72-hour period), needed 17 bottles of liquid nutrition and four clothing changes before his Zwiftathon effort concluded.

“I got off the bike during the event,” says Boocock. “But only for short periods.”

Yann Bertaud’s epic Zwiftathon efforts, both on and off the bicycle, were more fragmented. But no less challenging. In between raising funds and jumping into Zwiftathon rides, the 50-year-old from northern California showered, napped, spent time with his daughter, bought a Christmas tree, and had dinner. But all in all, Bertaud raised $5,905 while logging 153 miles via his participation in seven different Zwiftathon group rides. Only Zwifter Eric Carcoux ($6,975) raised more.

“One woman from Iceland donated. I don’t even know her. Kevin Connors [another top Zwiftathon fundraiser] donated $179 toward my fundraising,” says Bertaud. “I was totally stunned. I thought, this is amazing.”

The equal to Zwift’s passionate riding community is World Bicycle Relief itself. The 11-year-old organization has donated a Buffalo Bicycle to each of over 320,000 people living in rural parts of underdeveloped nations, who without such a transportation tool otherwise struggle to reach destinations like school and work, as well as sources of food and clean water. Thanks in large part to the Zwifting community, the WBR fundraiser generated enough money to build another 2,000 bicycles.

“Last year we rode over 125,000 miles, and this year was another highly successful year. Tremendous credit goes to the Zwift community,” says Katie Bolling, development director for World Bicycle Relief and a Zwifter herself. “Where we do go from here? I feel that we have the elements for a million-mile ride.”

Go ahead and mark your calendars now for next year's Zwiftathon on Saturday, December 2nd, 2017. And one last thing: You can continue to celebrate the Ride On Zwiftathon for World Bicycle Relief by purchasing the jersey worn by Zwiftathon participants. All profits from its sales further benefit WBR.

Announcing our Zwift Academy Finalists! over 5 years ago